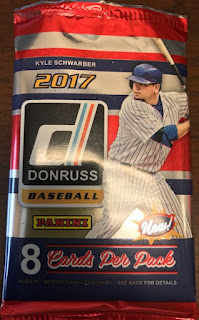 I'm surprised no one has posted one of these yet! Or, maybe I am clueless and missed the post in my searching. You never know with me.

This is 2017 Donruss Baseball. The standard card fronts feature a white border with little specks in it, like someone grabbed the spray paint tool in MS Paint and had some fun. Interesting. I suppose it invokes designs of yesteryear: Back when the borders were red and the dots were white. In the upper left corner, the Donruss logo and name. Immediately to the right of that, we have the player's position in ALL CAPS and a script font player name. The city of the player's team appears on the far right. Since these are not licensed, team names do not appear on the cards. The players are prominently pictured in the middle of the card, vertically oriented. I do not know if there are horizontal versions because all of these are vertical. I don't believe Donruss does horizontal (which sounds much dirtier than it is meant to). Along side he player picture are a series of "racing stripes" done in the team's primary focal color (Black for White Sox, Red for Phillies, etc).

I actually like the design, though as mentioned before, it all seems a bit retro. Speaking of retro, there are inserts that feature the 1983 design. I happened to pull two of them. 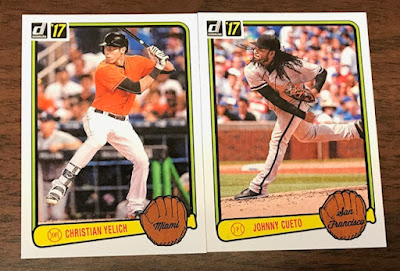 The card backs, whether standard or retro, feature a greyscale background. The card numbers are placed in baseball icons that mimic the 1983 style. The "Panini," Donruss baseball," and "MLBPA" logos take up about the top 1/4th of the card back. Below those, the player's name in the same script as on the front. Under the name, in all caps sans serif, the city and position of the player. In the middle, there is a black band with white text featuring information in prose about the player - generally, it is stat-oriented. Interestingly, there is a blurb about Panini not being affiliated with the MLB just under the player info. Not sure why it's there and not lower on the card. Below the "we have no license" message, player stats from the previous season with a line under that showing career stats. Still within the grey background, near the bottom, we have bio info. The copyright info appears in the white border at the very bottom of the card. One would think this is where the "lack of license" statement would go. No? 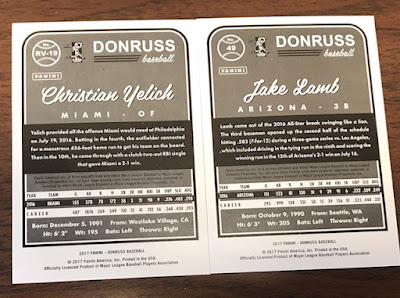 I also pulled a "Rated Rookie" card. These are similar to the standard issue, but the side stripes are a little different and are pulled in closer together than the standard version.