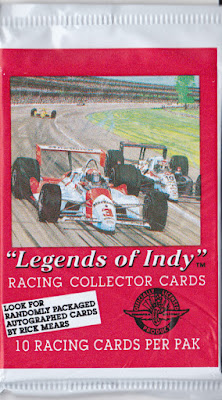 Indy 500 is on this Sunday and here's another Indy 500 related pack. This one from Legends of Indy set produced in 1992. According to the box about 3000 cases produced. You can easily finish a set with one box. It feature drivers who drove 1991 race along history highlights. The artwork on the pack featuring Rick Mears passing Michael Andretti on the outside of turn 1. It was final pass for the lead as Mears went on to win his 4th Indy 500. On to the pack.... 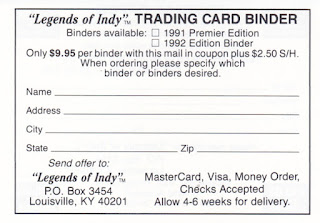 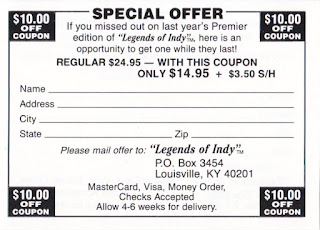 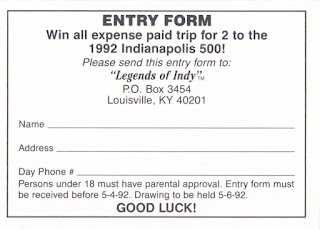 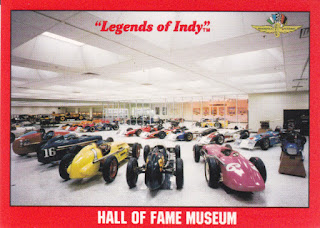 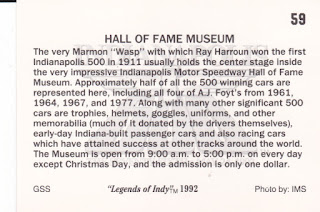 59 - Hall of Fame Museum - The Hall of Fame museum located at the track featuring the history of track and the cars driven on it. 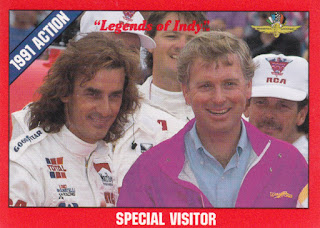 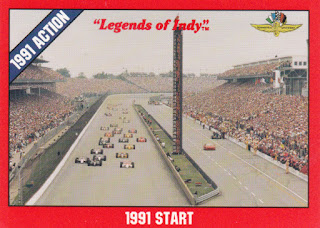 45 - 1991 Start - Action photo from the race as pole sitter Rick Mears leads the field along with legends A.J. Foyt and Mario Andretti that made up the first row. 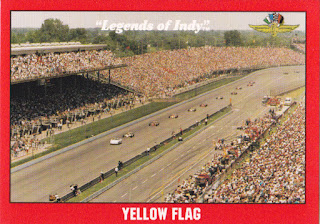 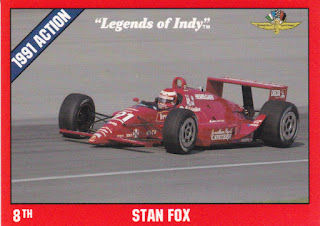 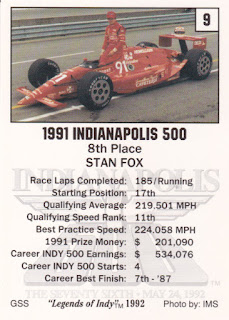 9 - Stan Fox - he took the checkered flag in 8th driving for Ron Hemelgarn/Jonathan Byrd. It was last time he finished the race. Will be known for surviving a big accident in 1995 race ending his career. He would die in 2000 in road accident in New Zealand. Jonathan Byrd Cafeteria sponsor been hit with death as previous drivers (Rich Vogler and Billy Vukovich III) died in accidents. Jonathan Byrd would pass away in 2009. It continued on when Bryan Clauson (drove in 2015 and 2016) would perish in accident in 2016. 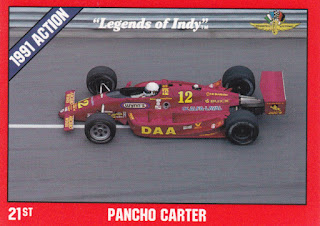 22 - Pancho Carter - replaced Mark Dismore in the car after Dismore had serious accident during practice. Engine failure ended his race. It was final Indy 500 for him. His only win was a 500 miler at Michigan International Speedway. 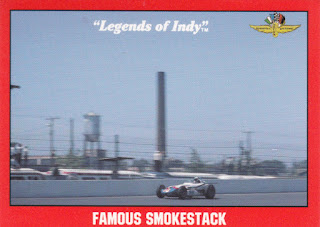 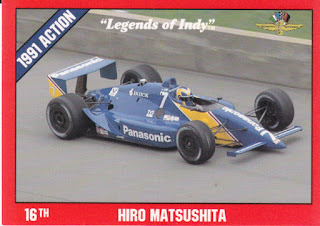 17 - Hiro Matsushita - first Japanese driver to qualify the race finishing 16th. He broke his leg the following year in practice forcing him to miss the race. Made the race three more times afterward with his best finish 14th. Got the nickname "King Hiro" from two-time Indy 500 winner Emerson Fittipaldi who radio his team about having hard time lapping him and meant to say "F***ing Hiro!" 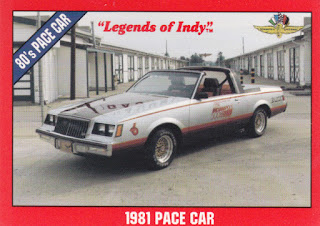 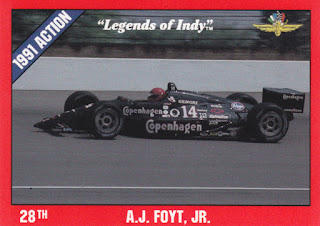 29 - A.J. Foyt - the legendary driver won Indy 500 four times (1961, 1964, 1967, 1977). He's the only driver to win Indy, Daytona 500, 24 of Hours of Daytona, and 24 Hours of Lemans. Making his 34th consecutive start at the race he qualified 2nd, but debris from a crash broke his suspension knocking him out at 28th. Thought to be final Indy 500 race he came back the following year to make his 35th consecutive start and finish 9th. It was final Indycar race he drove as he retired before qualifying in 1993. He returned to driving, this time, in NASCAR qualifying for inagural Brickyard 400. Running his team in Indycar since the 80s he experienced victories in the late 90s during CART/IRL split with Kenny Brack winning Indy 500 in 1998. He got three drivers in the field this year with 2013 Indy 500 Tony Kanaan, rookie Matheus Leist, and James Davison.

Email ThisBlogThis!Share to TwitterShare to FacebookShare to Pinterest
Labels: 1992 Legends of Indy

This set did a good job capturing the previous years race. I wish they had done more years than just 91 and 92.