Written by Jafronius at 12:07 PM
Greetings!

Hope everyone is doing well.

I'm hanging in there...I'm assisting with the remodel of the Target I work at part-time by essentially working overnights full time.  That plus the regular job means I don't have much time for anything else during the week except for sleeping.  Also, an earlier than expected move out of the house we've been renting for the past 7 years means that I'm currently living with my in-laws with all my stuff in storage.  Ugh.  I have some pics saved on my computer for posts I've been holding on to, but they're mostly Pokemon, so that my youngest can take the cards back and do whatever he does with them.  Anyway, this isn't my blog, so no need to bore you all with the details; you're here for pretty pics, right?

So, one night while putting things away, I came across these in the clearance section.  I thought it was too soon for them to be put on clearance but also thought one was good for the site...it's a 2018 Funko Avengers Infinity War Mystery Mini! 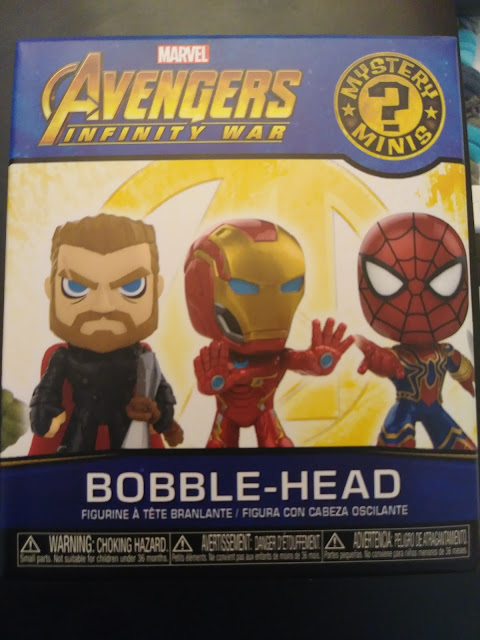 In case you've been living under a rock for the past few weeks, Avengers: Infinity War is the culmination of 10 years and 19 movies' worth of Marvel super hero adventures.  In three weeks, it has made close to $550 million in the US alone.  However, there doesn't appear to be any trading cards released to celebrate the movie, unless it's being held back to prevent any spoilers. 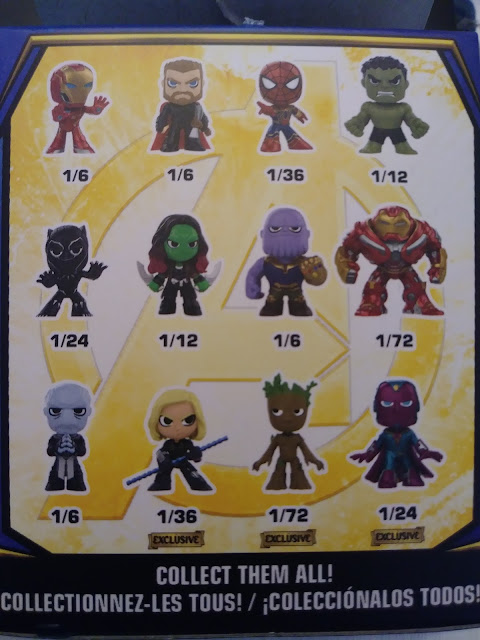 Here's the back of the box, which shows you the available bobble-heads as well as the odds of pulling them.  This back is from the Target exclusive version (if you haven't gathered that from the top of the post).  There is also a regular release, a Wal-Mart release, and a Hot Topic release.  Head over here for the complete list.

The bobble-head comes sealed in a black plastic bag, with nothing else inside.  So who did I get? 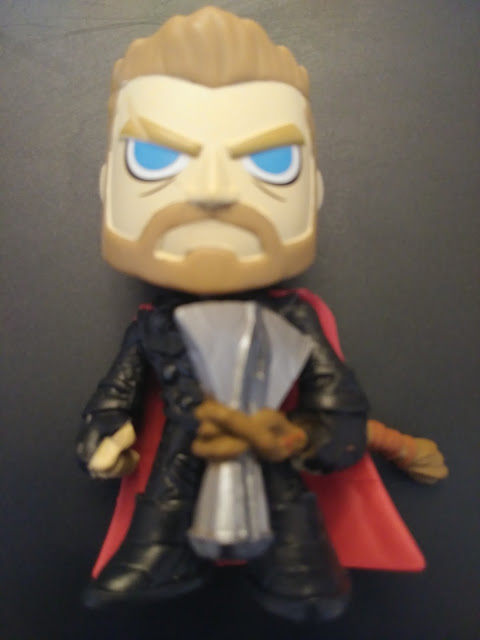 I got Thor, and I'm cool with that.  I guess I would have preferred the Hulkbuster; I've read that the thing's so heavy that you'd know that you got it when picking up the box...so yes, I tried lifting all the boxes and it wasn't among the remaining boxes.  I don't think lifting the box constitutes pack searching.

Anyway, that's the box.  I may get more if the clearance price drops more so that Thor could have a buddy to hang out with or an enemy to fight.  And as for the funky-looking ax instead of his hammer, well, spoilers.

These are cool. I want Spidey or the Hulk.