Written by Rebel Coyote at 1:59 PM 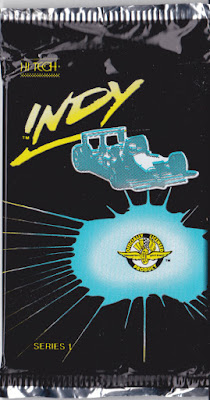 The greatest auto racing spectacle coming in week and half. Been huge fan of the Indy 500 since I was a kid. This is one of few card sets dedicated to the race. The set consist of 81 cards based from 1992 Indy 500 race. I remember the race as one of worse ones with numerous accidents resulting multiple drivers getting sent to the hospital. It was already grim month of May prior to the race with big crashes (Rick Mears sliding down the track sideways) and injuries (3-time Formula 1 champion Nelson Piquet, attempting make his first ever Indy 500, broke both his legs) and a death (Jovy Marcelo) during practice and qualifying. The race ended in only high note with a duel to the finish. This post will include links to the race. On to the cards. 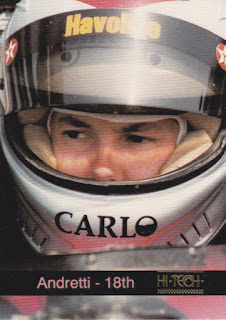 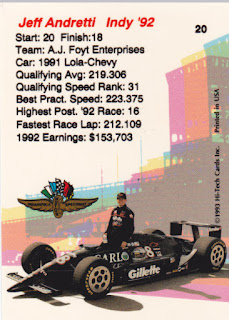 20 - Jeff Andretti - first 33 cards feature drivers' starting position from 1992 Indy 500 race. Front listed driver's finishing position. Back of the card feature picture of the driver and the car when they qualified along with speed and team they drove for. Strange how Jeff is driving for legendary A.J. Foyt after Foyt blasted him the previous year. The youngest son of legendary Mario Andretti broke both of his legs in one of most violent crashes at the speedway. To his day I still wince when I watch the clip. 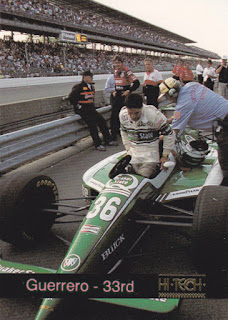 1 - Roberto Guerrero - pole sitter with, at the time, fastest qualifying speed of 232.482. He didn't make it to the green flag as he crashed it during the pace laps. That audible laugh from a fan will live on. 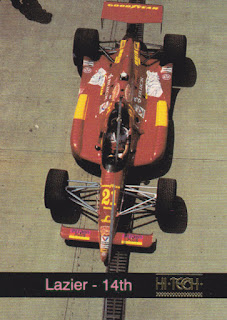 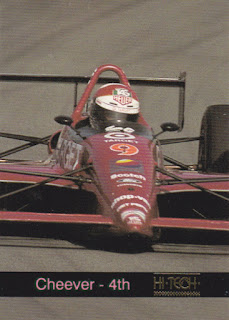 2 - Eddie Cheever - he lead the field to green flag by default after Guerrero crashed only to get split by Mario and Michael Andretti going into turn 1. He's the lone Ford engine to see the checker flag at the end. He was driving for Chip Ganassi that year. Driving his own team he would win Indy 500 in 1998. Currently Indycar commentator for ABC; most likely announcing his final Indy 500 race this year as NBC Sports got Indycar TV rights starting next year. 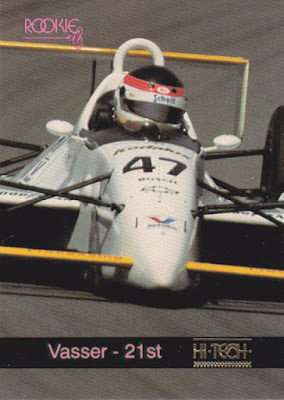 28 - Jimmy Vasser - a rookie at the race he got bit hard breaking his femur in a crash. He came back and became CART champion in 1996 driving for Chip Ganassi. After his driving career ended he become a team owner with KV Racing who won 2013 Indy 500 with Tony Kanaan driving. The team shut down before start 2017 season and sold their equipment to Juncos Racing. He's back this year at Indy in partnership with Dale Coyne Racing. 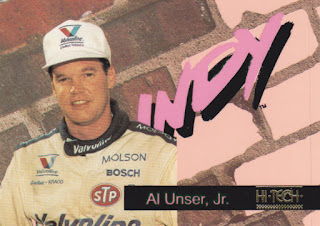 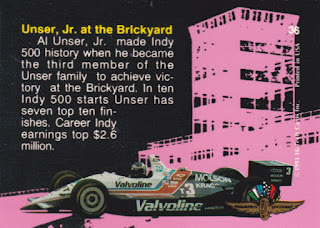 36 - Al Unser, Jr. - winner of 1992 Indy 500 in a thrilling duel with Scott Goodyear driving for Rick Galles in Galmer chassis. It was final victory for the Galmer chassis. He joined his father Al Sr and uncle Bobby as winners of the race. He won his second Indy in 1994 driving for Roger Penske. The following year the entire Penske team failed qualify for the race marking first time defending champion did not qualify for the race. The years within next decade haven't been kind to him afterwards dealing personal issues along with drug and alcohol abuse. Good news he's been sober for 7 years. 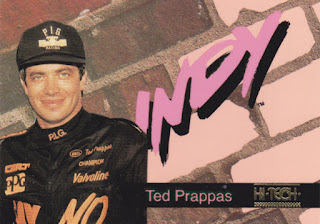 51 - Ted Prappas - after multiple crashes during practice in 1991 he finally made the field in 1992. Dropped out of the race with gearbox problem finishing in 16th. It's his only time he raced at Indy 500. 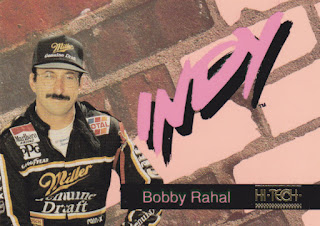 41 - Bobby Rahal - 1986 Indy 500 winner finished 6th in the race a lap down. 1992 was his first year driving for his own team which continues to this day with his son, Graham, and last year Indy 500 winner, Takuma Sato, racing. Team won 2004 Indy 500 with driver Buddy Rice in a rain shorten race. Danica Patrick started out with Rahal team before going to Andretti Racing. 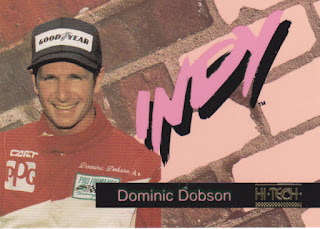 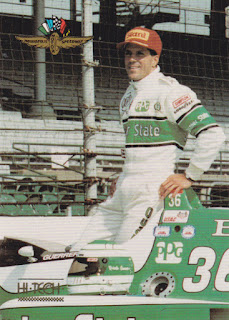 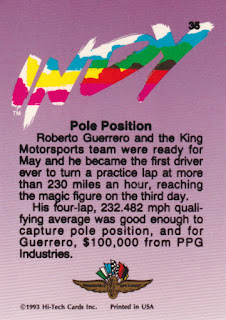 35 - Roberto Guerrero - getting his qualifying pose done before the bad luck hit on race day. Card glossed over his teammate in the race, the late Jim Crawford, was the first to hit unofficial 230 MPH lap at practice.

Let the field of 33 be filled and be ready on Memorial Day Sunday.

IndyCar is one of the few sports left that I can truly say I love. I wish they series' decision makers would get their s#it together and have someone produce a set. It's been over a decade.

This has to be my favorite Indy set...love 90s neon. I have a box I have not finished opening yet, i think it's almost time to do some...