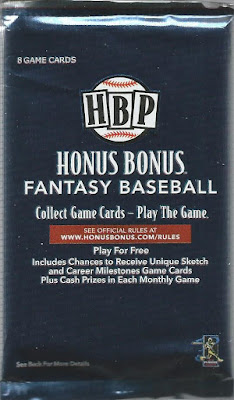 I bought a repack box recently (I know, I know.. I'm addicted, okay. I swore of repacks a hundred times, and 101 times, they suck me back in.), and inside the box were two packs of "Honus Bonus Fantasy Baseball" trading cards. I had never heard of these before. I present one of the packs here. 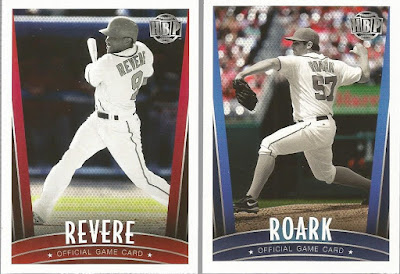 The cards are nice glossy stock and feature an interesting design: colored frames with greyscale player images. The cards are NOT licensed by the MLB, so we won't see any official team logos, names, etc. On the front in the upper right corner, we have the HBP logo. The player is greyscale, but the background itself is in color. It's an interesting take on design for sure. The "frames" on the cards extend in something of a diagonal from the upper outer corners downward and feature the primary color of the team depicted (so far as I can tell). The player's last name is printed in all-caps in a slight arc near the bottom as is the phrase "Official Game Card." 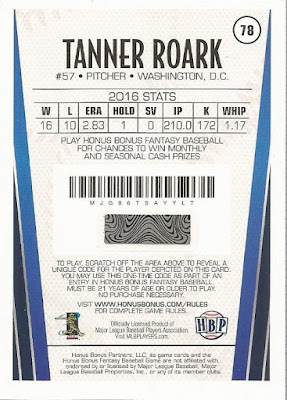 The card backs feature much more detail: Card number, player name, uniform number, position, and city of ball club. Remember, these are not MLB licensed, so no actual team names here, folks. There is a section with 2016 stats and a plea to play online to win prizes. Below the plea, a unique bar code (er, I assume unique and I assume each individual player has the same code - ex: all Tanner Roarks have the same bar code, I assume). Under the bar code is a scratch-off area with a code that you can, er could, enter into the HonusBonus website as your entry (more on that in a bit). Below the secret code, there are instructions as to what to do with said code plus infor related to MLBPA, Honus Bonus LLC, etc.

I have to say, I actually like the card design. I didn't at first, but it has kinda grown on me. Which is a bummer... Because HonusBonus.com is defunct. In fact, these cards seem to have come out sometime around April 2017 and the whole things was shut down in August 2017. Yikes!

The Trading Card Database has a full checklist of the set. There was a brief discussion about the shut down on Blowout Cards, but that convo lasted about as long as the HBP company... An eBay search (at the time of this writing, May 2018) reveals a lot of cards available in addition to loose packs and a hobby box or two.

At the time of writing this, I have reached out to Mr. Charendoff for a possible interview to talk about the project. Fingers crossed!

The one thing I really liked about it is that they found ways to specify which Chicago (North or South) or New York (Queens or Bronx) was featured on the team card. That's something I wish Panini would do, especially for their more prospect-themed releases.

The design reminds of an Upper Deck release years ago but I can't recall the year. I picked up a couple boxes last Christmas for $10 each. Collation was terrible. If you're looking for any player or team in particular, shoot me an email. I'd be happy to send some your way. acrackedbat at gmail etc

Looks like the back has the city of the team they play for. I hate the modern unlicensed cards. To me it seemed back in the early 1980s and before unlicensed items could at least mention team names even if they couldn't legally show logos. I can't stand the generic unlicensed look.

These cards are like that "2015 Platinum Series" collectible card game back in that they intrigued me at the start and then intrigued me even more when I never saw a single card anywhere.

I like the design; I only wish they made only the player's uniform greyscale and left their face & arms the normal color.