1963 Eddie Sound Promotions - Our Wonderful World of People: Their Customs, Their Flags, Their Costumes, Their Monuments 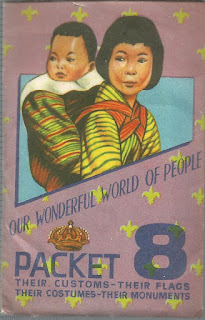 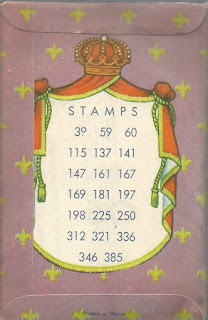 Well, this should certainly be in the running for the longest named pack we've seen on here. This pack is from the 1963 stamp set produced by Eddie Sound Promotions. As you can see on the wrapper, each pack featured an artist's rendition of a world people. Each pack was numbered on the front, so collectors could choose which packs they needed to complete their set. In all, there were 400 stamps. Each pack has 20 stamps. This pack is Pack #8. The back of the wrapper shows which stamp numbers were included in the pack. I have to say, it'd be nice if card companies did this. Sure, it takes some of the fun out of it, but you'd know if it had a card you needed or not! I digress.

The cards, er stamps, themselves are VIBRANTLY colored! The scan does a nice job of showing off the colors. Some of the stamps feature people, some have flags, and some have various customs or monuments. 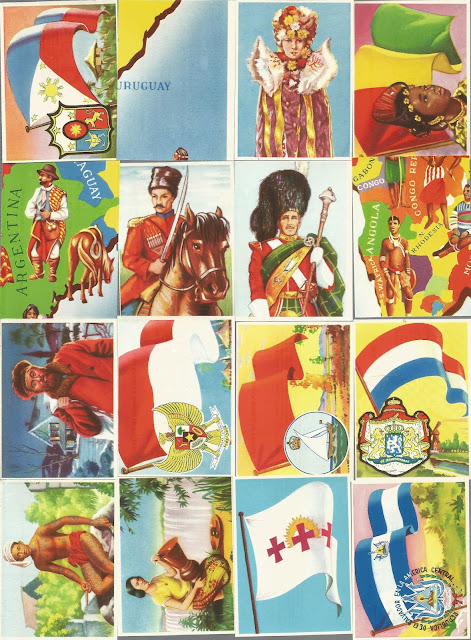 The back of each stamp features the set name at the top. This is followed by the stamp number in some cases, and in other cases there is no stamp number after the heading. Instead, the stamp number appears at the beginning of the paragraph that appears on each one. The paragraph explains the image on the front. Some of the stamps have the number "8" watermarked, presumably to indicate they cam from Pack #8. Some pieces fit together to make a puzzle of the world. Those are labeled at the bottom with the continent to which they belong. 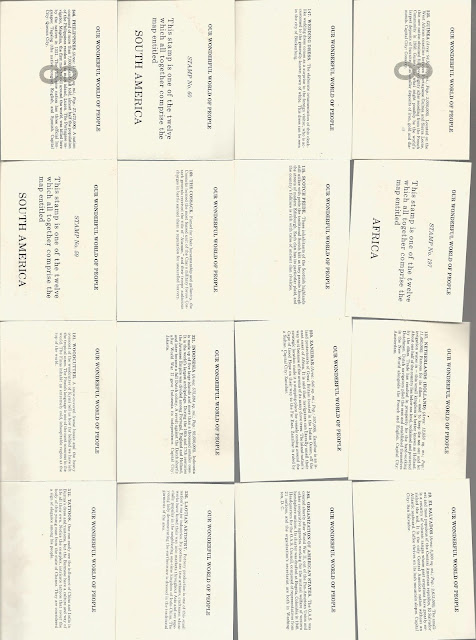 Here is a closer look at some of the stamps from the pack. The paper itself is definitely the same weight as stamps of the time. Frankly, until the post office started offering self-sticks, these stamps have the weight of most stamps in use. These were printed in Mexico, according to the line on the back of the wrapper. Simply gorgeous artwork, standing up to the passage of all this time!

If memory serves, I received this pack from a fellow collector who read my blog and took part in several of the giveaways I've done. I apologize for not remembering who sent it, but a huge THANK YOU to that person for sharing these amazing stamps.

Email ThisBlogThis!Share to TwitterShare to FacebookShare to Pinterest
Labels: 1963 Our Wonderful World of People

Very interesting. I'd love to see what stickers were produced for Japan.