Written by flywheels at 1:06 PM
The 90's was a great era of comics...well at least in my eyes. With Marvel Comics purchasing Fleer, there was no shortage of comics spilling over into trading cards. Prior to this the comic sets were small and released by the likes of Comics Images and eventually Impel. 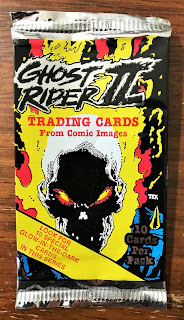 I grabbed a sealed box of 1992 Ghost Rider II cards at a comics show in 2019 and the box was shelved as I was working on other projects. However as of late I've been on a Ghost Rider kick of sorts so decided last weekend it was finally time to crack the box open. 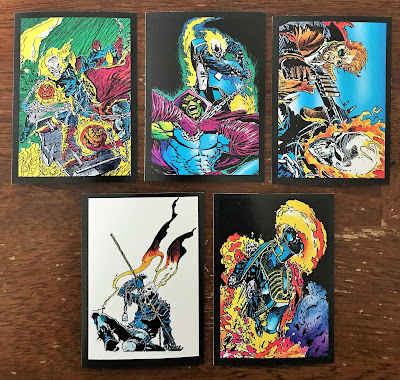 This is my first experience with anything from the small card company Comic Images, so I was a little surprised to see how thin the cardboard was that was used for the cards. These are some of the thinnest trading cards I've ever seen. The black border also shows off every imperfection of the cards. While I forgot to snap a picture of the back of the cards, all of them (at least in my box) were off center.

The artwork used on the cards however is dark, gritty and very beautiful. The art hails from the different comic issues and is from different artists...some I'm familiar with and others I'm not. I was happy to see Spider-Man on the first card I pulled from this pack, followed by Sleepwalker. 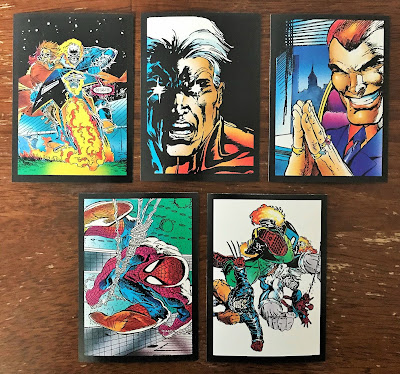 The card in the lower right hand corner is taken from the Fantastic Four #347 (or #348) when Ghost Rider, along with the grey Hulk, Spider-Man and Wolverine briefly formed the "new Fantastic Four" to exact revenge on the shape-shifting Skrulls. Love those two issues and the art by Arthur Adams was such a treat to view. 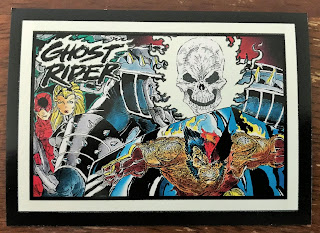 Inside each pack was one of ten glow in the dark insert cards. This particular one features art by Rob Liefeld and Ghost Rider's flaming skull (and the logo) glow in the dark. 90's gimmick cards at it's finest.

In the end I was able to put together four complete sets with the glow in the dark cards! I gave one set to my older brother, kept one for myself and I believe another will be sent to a trading buddy of mine. The other will be up for grabs if anyone is interested.

I like the different art and how there are plenty of other Marvel characters to round it out. Is that Captain Marvel top center in the third photo?

No, that's not Captain Marvel. It's a character called Snowblind, one I'm not all that familiar with.