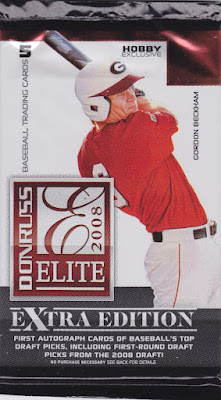 I don't delve much into the non-MLB licensed prospect sets that feature players in Photoshopped college gear and other weird uniforms, but this was included as the requisite "hobby" pack in one of the newer repack configurations available sometimes at Target. 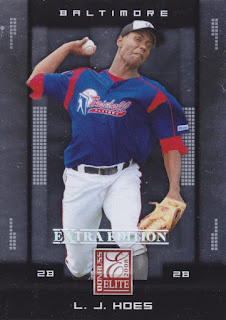 67 - L.J. Hoes - I'll try to avoid making an "Area Codes" joke here, and just point out the weird "Baseball Factory" uniform that the subject is wearing. Is Hoes an actual sentient being or a product of some sort of weird baseball science? 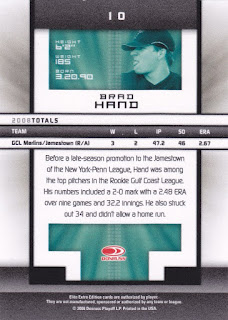 10 - Brad Hand - One of the more familiar names in the pack, Hand has made the All-Star team the last three seasons as a reliever. Here you get a look at one of the boring card backs which apparently must have inspired Panini when they took over the Donruss/Playoff licenses not long after this came out. 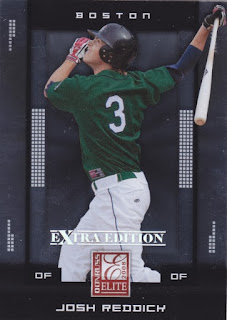 59 - Josh Reddick - Another solid name. It's actually kind of a surprise to pull two players who are still active and relevant in the game today. 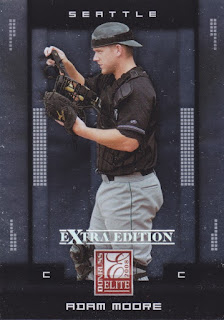 5 - Adam Moore - I can't be the only one who has asked from time to time what the meaning of "Extra Edition". This seems to imply that there would be a "regular" edition of this set, but in most cases it seems that there is not. 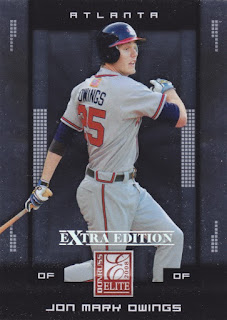 54 - Jon Mark Owings - We end with a guy I've definitely never heard of who actually sort of looks like he's wearing a Braves uniform. Is this some sort of Fall League uni? I cant' really tell. It also has the US flag on the back which could mean it is for some sort of national team competition.