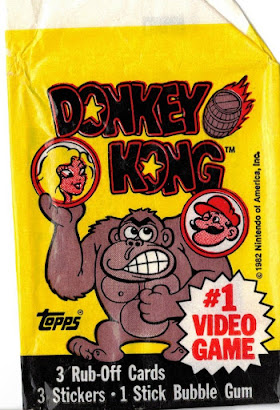 1982 would give us our famous Cal Ripken rookie card. But today, we are talking Donkey Kong.

The arcade game came out in 1981, followed by a Game-And-Watch version in 1982. It was a year before the great video game crash, followed by the 1985 release of the NES in the United States, reviving the industry.

But in 1982, it was all about the arcade, and Donkey Kong was in the arcade.

Those of you who are younger may remember the protagonist Donkey Kong from the "Donkey Kong Country" series. But before that, he was Mario's nemesis on the arcade machine, attempting to take him out by throwing barrels. Mario was known as "Jump Man" at the time.

Each pack gives us 3 rub-off "game" cards, 3 stickers, and a piece of gum.

Here are two fronts and a back of a game card. This game could be played 2 cards at a time, 1 friend vs. another for the highest score, if I am reading correctly. 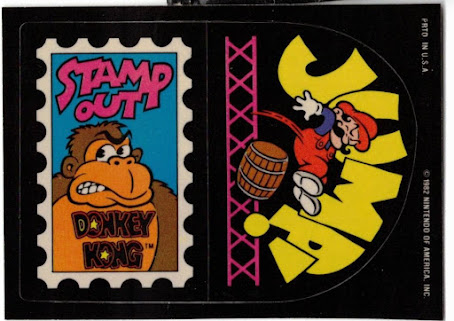 Our first sticker card depicts "Stamp Out Donkey Kong" and an image of Mario avoiding a barrel. 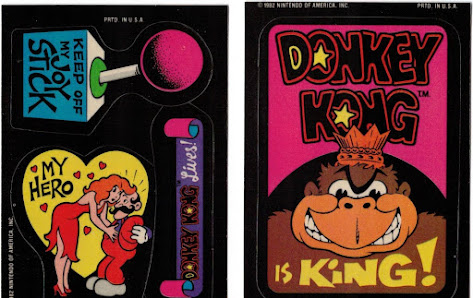 Here we have some comical stickers including a damsel in distress, "keep off my joy stick", and "Donkey Kong Lives!" followed by a "Donkey Kong is King" Sticker. 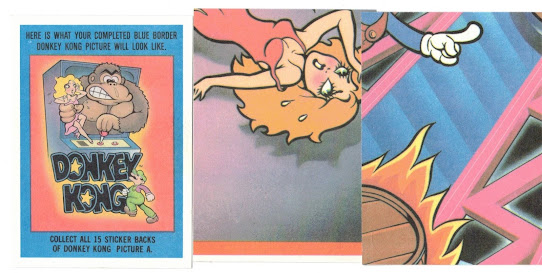 Our sticker backs show that if you collect enough stickers they combine to form a picture.

Very cool pack. I loved hitting up arcades when I was younger and Donkey Kong was one of my favorite games.

I have a few packs' worth of these from back in the day.

Great dose of nostalgia here. Thanks very much for sharing!

When I see any boxes or packs of this I think back to an auction at a coin/stamp/cards store I attended that I was hired to be a consultant for & if I saw anything that was interested in I could bid on the item & it be part of my payment. Well I saw what appeared to be a case of Donkey Kong unopened but after close investigation turns out it wasn't but instead I saw an 'X' across the letters 'TB'. Now what came to my mind what sports had that combination football & basketball without a doubt I knew I was destined to get that case at no cost. Well the auction continued then suddenly the person who hired me asked if I saw anything I told them about the case of Donkey Kong the auctioneer added it to a table that my employer had wanted bidding came to where my employer bought it for $40 for all the stuff including the case I desired on the table soon as the auctioneer said sold to my employer I went straight to the case took it to his vehicle before anyone had any problems. As the auction continued on & was wrapping up my employer asked what was so VIP about a case of Donkey Kong cards & that's when I opened my box to reveal to him 12 unopened boxes of 1982 Cello Football. My employer eyes were shocked he ended up paying me for 9 out of the 12 boxes. My total payment for my consulting services came to over $650.00 @ $50/hr(not a bad day working eh!!!) plus anything I wanted at the auction which included 3 unopened 1982 Topps Cello Boxes of Football & other stuff. I ended up selling 1 of the boxes & opened 1 up made the set as this was a starter for me & kept 1 unopened for memories of the day. To tell others about it. So yes Donkey Kong cards are a good thing to see get their attention it deserves.