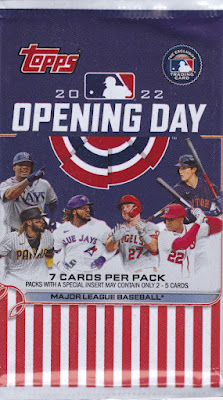 It's finally here! At long last, a new baseball season is finally upon us. I am really not liking what Rob Manfred is doing to the sport, but at least we have the games back. Let's look at a pack of the new Opening Day series to celebrate. 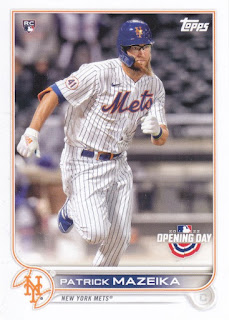 19 - Patrick Mazeika - Right out of the gate, we have an annual tradition of me not recognizing one of the new rookie crop. How do we feel about that tiny RC logo? 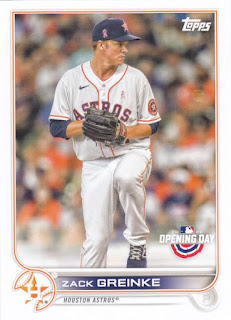 180 - Zack Greinke - Zack is back with the Royals, where it all started with him. He'll be their opening day starter. 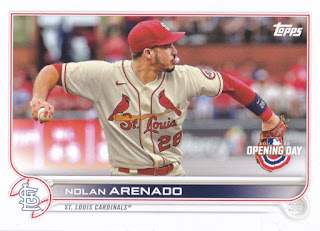 31 - Nolan Arenado - One of the best third basemen in the game. I have a feeling that, when it's all said and done, I'm going to end up having a huge amount of Arenado cards in my collection.

BS-24 - Matt Olson Bomb Squad - Bomb Squad inserts fall at 1:3 per pack, so you'll end up with a bunch of them if you buy a blaster. Olson was part of the mass A's exodus this offseason, as he ended up in Atlanta to replace Freddie Freeman. 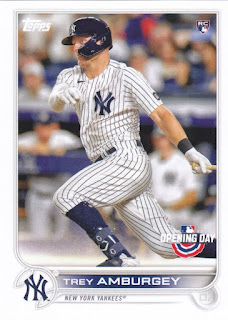 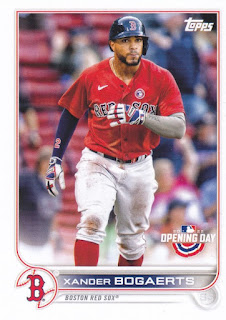 173 - Xander Bogaerts - The Red Sox shortstop is entering his tenth season, which is just nuts because it seems like only yesterday that I was making some comment in one of these blogs about how I'd never heard of him. Cool name, though. 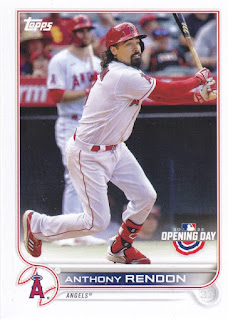 185 - Anthony Rendon - It remains to be seen if Rendon will turn back into the MVP-caliber player he was with in his Nationals prime. It seems like the Angels curse everything they touch.
Enjoy the games, everyone!

opening day is always a fun time and a fun pack rip. even if there are more players i don't recognize than ever before.