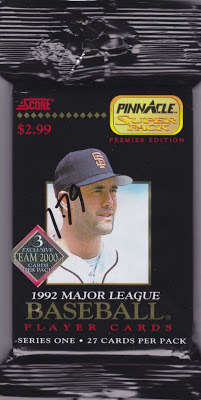 Once upon a time, Pinnacle was Score's answer to the growing "premium" baseball card market. 1992 was a year that everyone was trying new things, and this would be another entry (along side Score Select) into the market, one I managed to almost completely avoid the first time around. I don't remember where I got this particular pack, but I do know that I didn't pay anywhere close to the $2.99 list price or $1.79 price that is written in marker on the front.

290 - Kenny Lofton Sidelines - Lofton played basketball for more than just a hobby. He was a pretty serious player in his day.
305 - Jay Buhner Shades - Reminds me of this excellent post over at The Junior Junkie.
231 - Steve Avery

I rediscovered this set recently. I've thought about trying to finish building it. It's really a nice looking set.

Gasp! I've never seen that Buhner card. Is that the stubbly beginning of the famous Buhner goatee I see?

If you're trading that thing, let me know!

Kirt "what was that" Manwaring.

I love the 92 Pinnacle set! I'm so close to finishing Series 1 that I can taste it. I don't really have anything to add to this, but I feel obligated to post a comment whenever it comes to 92 Pinnacle. '92 was an awesome year for collecting, but I might be biased because it was my first.