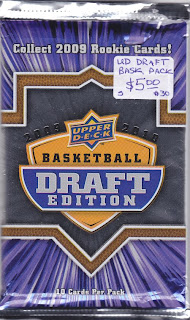 I've got a contest going on for the upcoming college basketball tournament that everyone gets so excited about. In honor of that, I thought I'd show off a pack of (mostly) college basketball players about to turn pro that I picked up for $1 at a card show a little over a week ago. 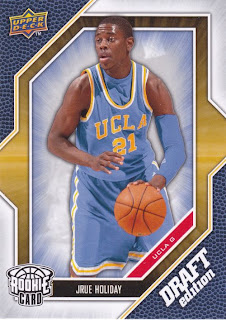 55 - Jrue Holiday - Right off the bat, I get an All-Star player. There probably aren't a ton of All-Stars in this set. 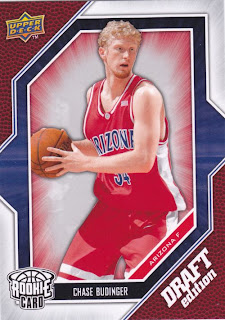 13 - Chase Budinger - Budinger was a 2nd round pick and is now on his second NBA team (Timberwolves.) 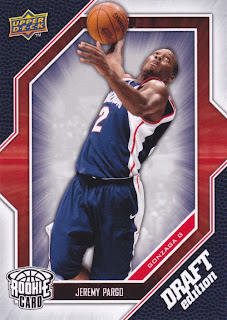 47 - Jeremy Pargo - Jennero Pargo's brother went undrafted, which makes me question the overall premise of this set. After two seasons in Israel, Jeremy found his way to the NBA where he plays for the 76ers. 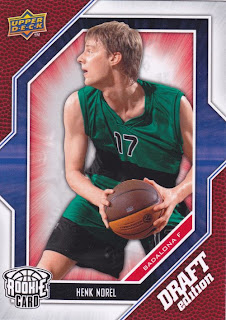 38 - Henk Norel - Minnesota drafted Norel in the 2nd round, but he has spent his entire pro career in Europe. 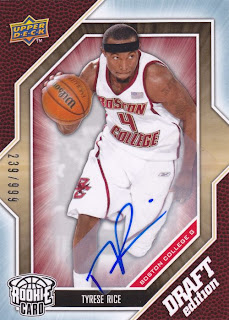 62 - Tyrese Rice Auto (239/999) - Yeah, Rice wasn't even drafted. Of course. I'm not sure why the piece of tape that this player signed had to be affixed diagonally. Any BC Eagles fans out there? Yeah, I didn't think so. 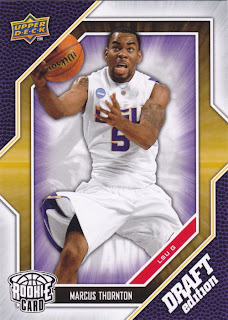 64 - Marcus Thornton - Thornton has been a productive NBA player after being drafted in the second round and traded a couple of times. 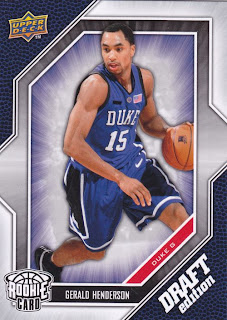 33 - Gerald Henderson - Henderson Jr. was a late lottery selection by the Charlotte Bobcats, and he's still there. I'm not sure what that says about the Bobcats, because he hasn't exactly been amazing. 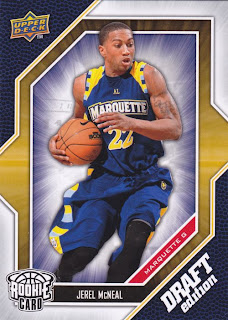 46 - Jerel McNeal - McNeal went undrafted but became a D-League All-Star this year, for what it's worth. 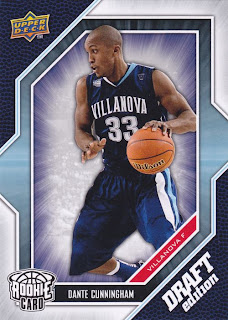 32 - Dante Cunningham - Cunningham was a 2nd round pick who I liked when he played in Portland, but is already on his 4th NBA team. 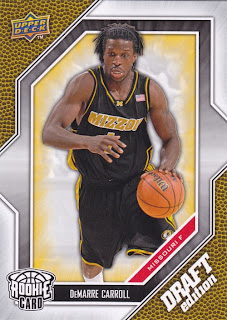 25 - DeMarre Carroll - Carroll was a first round pick who has struggled to find consistent playing time. He's on his 4th NBA team (Utah) as well.

Is that auto up for trade/sale?

Yes, the auto is definitely up for trade. Let me know if you'd like it.