Every now and then, I need to take a break from my cardboard addiction and focus on something different.  And that's exactly what I did, when I discovered my friend was dumping a box of 1983 Topps Baseball Stickers for $2. 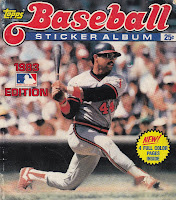 Now if you're not familiar with this product, it's essentially the same thing as the 2013 Topps Baseball Stickers.  The only difference is that these are three decades old.  I set my sights on building a complete set of 330 stickers from the box of 100 packs.

Each pack contained 6 random stickers that were designed to be affixed in the baseball sticker album above.

Here's what I pulled in my first pack: 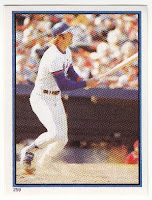 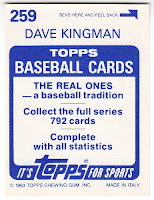 Kong was a three time all-star, who played sixteen seasons in the MLB with seven different teams.  He ranks 38th all-time on the home run list with 442 round trippers. 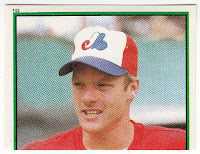 On August 4th, 1982, the New York Mets traded Joel Youngblood to the Montreal Expos.  That day, Youngblood became the first and only player in MLB history to get a hit for two different teams in two different cities.  And to make things even cooler, both of his singles were against HOF pitchers.

By the way... this sticker isn't a printing error.  The rest of Youngblood appears on sticker #144, where he's also pictured in his Mets uniform. 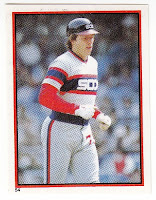 Easily, the best player in the pack and the only HOFer.  Fisk played a staggering twenty-four seasons in the MLB... thirteen with the Chicago White Sox. 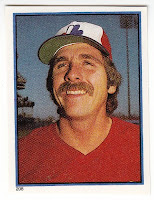 Steve Rogers has the most wins and strikeouts in Montreal Expos history.  He played his entire thirteen year career with the Expos and represented them in five different all-star games. 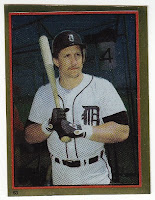 Topps selected one player from each team to appear on a special foil sticker.  Parrish beat out Lou Whitaker, Alan Trammell, Kirk Gibson, and Jack Morris to represent the Tigers. 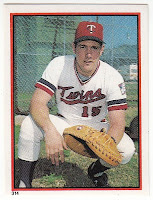 The final twenty-four stickers in the set were made up of what Topps called... STARS OF THE FUTURE.  I'm not sure if I'd go as far as to say Laudner became a star, but he did end up making the 1988 AL All-Star team.

You might recognize a few other players from this subset:  Cal Ripken Jr, Wade Boggs, and Ryne Sandberg.  If you're interested in seeing the "rookie" stickers for Boggs and Sandberg, click here.

As for the rest of the box break, I ended up with 327 out of the 330 stickers.  But thanks to Sportlots, I was able to complete the set at a reasonable price.

So if you're ever in the mood to take a break from collecting cardboard, here's a fun and affordable alternative.

Gotta love the back of the Kingman sticker, eh? "A Baseball Tradition..." juxtaposed with the "Made in Italy" inscription on the bottom of the card.

Topps Baseball, as American as Lasagna!

Lol... didn't put that together until you pointed it out. Suddenly Alanis Morrissette's Ironic is playing in my head.

Hello I HV the sticker album with complete set all included great condition. Anyone interested in purchasing it phychotdimas@gmail