Hope everyone is doing well.  It's been about 24 hours since the Blackhawks beat the Bruins in Game 6 to win the Stanley Cup.  2 goals in 17 seconds...amazing.

I don't have many hockey cards, but I was able to locate a previously-scanned pack to mark the Heat going back to back in the NBA Finals.  Here's a 2007-08 Topps Basketball Rack Pack!

Packs of this set have been posted twice already.  Heck, I even posted one.  Ah, but this is a rack pack; there's more cards here for us to enjoy.  Unfortunately, I must have taken the prior posts into account, because I only scanned a handful of cards.  Here's what was in the pack: 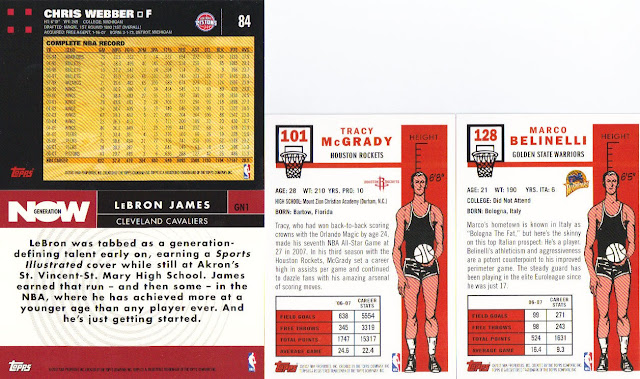 That is a great Kobe card.  I must have scanned the Childress because I thought both the background and the afro were photoshopped.

Anyway, that's the pack.  Again, congrats to the Heat and Blackhawks for the entertaining championship series, and quick Happy Birthdays to my youngest son (Sunday) and my dad (today).  More later...thanks for reading!