Written by JediJeff at 4:34 PM
For Father's Day (yes - I procreated.....TWICE!) I got the right to hit a card show as my gift. Did some dime boxing, picked up some cheap 1964 Topps for the set I am starting, and bought a few packs. My gift to myself was a blaster of '07-'08 Upper Deck Be A Player. It was $13 and guaranteed an auto. Two packs of 5 cards each, and for time and readability, I will just post the pack with the hit. 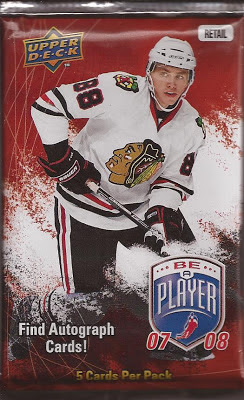 I know what is says in the upper corner of the pack, but this is Hobby - I SWEAR! Ok - it's not. Retail product here. Five cards in the pack. For starters, just how frigging awesome is the pack, huh? No Crosby, no Malkin, no Ovech. That, my friends, is what a hockey player looks like. Unfortunately, that is the only Blackhawk I pulled from either pack, as there were no Indian head sweater clad players to be found. Oh well, can't win them all. Right Red Wings? 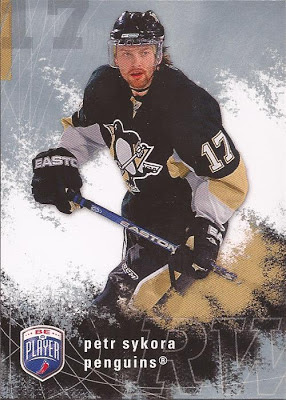 Old timer Sykora starts out the pack. Nice cards. The design is pretty vibrant. There is a gloss over the player, the BAP logo, the little dash of color in the upper left, and the position characters. Otherwise, the card has a flat finish. 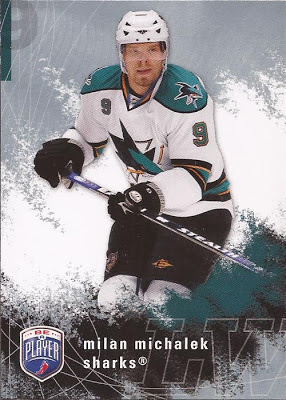 Milan currently is with the Sens. Not sure if I like the lack of any upper case letters in the player or team names. I get the trendy look they are going for, but still.... 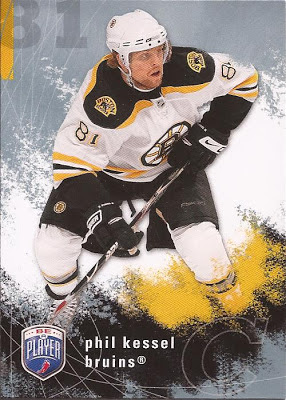 Kessel as a B. Unless he had a card in 06, this would technically be a Kessel BAP rookie. I am being told he did have a card in 2006, so this would be a 2nd year. 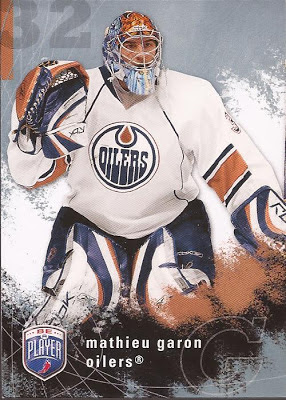 Mathieu has mostly been a backup in his career. Man, I hated those Oiler sweaters. But that is a pretty kick ass mask Garon is sporting, so he saves the card. (pun intended) 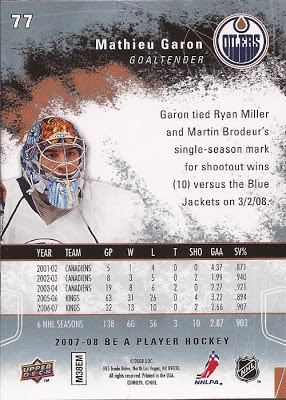 Image recycle on the back. Plus the usual 5 seasons worth of stats. Seems to be the standard now on hockey cards (and anything Panini puts out). And my hit? 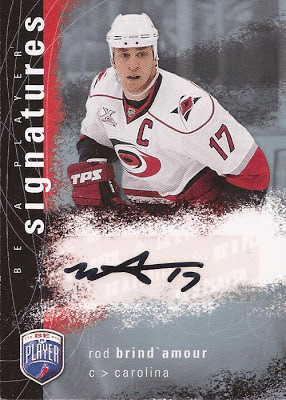 Could be worse. It is sticker. But a Brind'amour is not a bad pull from the box. Granted, it's not the Kane or Toews I was hoping for, but I can deal with it. If you are a Brind'amour fan, we can talk if you are interested in the card.

Ok - 2013 Cup is now tied 2-2 after Seabs pops in another OT goal. Three game series for Lord Stanley's hardware. Who takes it? (I'll give you a hint - NOT the team with a letter on their chest).

Email ThisBlogThis!Share to TwitterShare to FacebookShare to Pinterest
Labels: 2007-08 Upper Deck Be A Player

How in Gods name do you get Rod Brind'amour out of that chicken scratch?

I'm with The Big Kahuna... I'm pretty sure UD accidentally slapped some guy named Wa 17 or Ria 17's sticker onto your Brind'amour card.

I have a feeling your prediction is right... but I so hope you're wrong.