Written by Jafronius at 10:08 PM
Greetings!

Hope everyone's doing well.  The fourth quarter's about to start in Game 3 of the NBA Finals.  I'm going with Heat in 6.  LeBron's gonna play all crazy-like and Wade and Bosh will play pretty close to what's expected of them.

Anyway, I felt the need to post a basketball pack for the Finals.  It's a variation of a pack we saw before...it's a 2009-10 Upper Deck Basketball Rack Pack!

There were two versions of this rack pack, one had LeBron on it and other had Jordan.  I don't think there was a difference between the two other than the athlete that graced the front of the pack.  As you can see, there's 36 cards in the pack with 2 exclusive Sophomore Sensation cards.  Here's what was in the Top Pack:

I did not scan every card since we've seen a pack already.  Below are some samples: 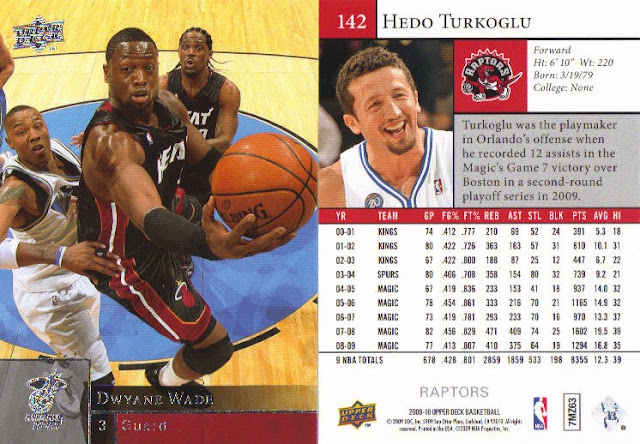 As usual, the photography is very good.  Showing the back of the Turkoglu card just because of Hedo's goofy grin.  Here's more from the Top Pack:

Upper Deck used the same design as the Baseball set they put out that year.  The names and some of the logos are sometimes hard to read; it may have been because of the photography used for the card.  Bonus points for digging up that old Seattle logo:

Here are the cards from the Bottom Pack:

And again, here are some samples:

Packs like these were plentiful at Wal-Marts and Meijers for a while.  I would just keep buying packs thinking I didn't have the big names.  Then, after realizing I had a stack of packs, I double-checked them and saw that I had the big names just a few packs in; sure, I would have loved to pull a Blake Griffin or Stephen Curry RC, but they were short printed.  Discounted pack buying can be addicting.

Anyway, that's the pack.  Here's hoping to a long and entertaining Finals.  Oh, and go Blackhawks!  I'm sure JediJeff's got some hockey packs all lined up for Lord Stanley's Cup.  Thanks for reading!