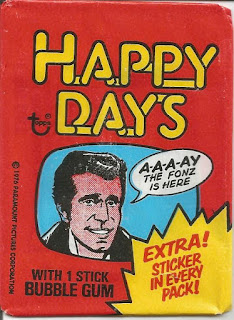 Sit on it! The insult that ruled the airwaves in the 70's was a phrase that most folks wrote off as gibberish. It found its way into nearly every episode of "Happy Days." In 1976, Topps made a set of 44 cards, some of which had puzzle pieces on the back and others had info about the image on the front.

The fronts of the cards displayed a large image captured from the TV show, surrounded by a red border. Below each image, yellow text related to the image - generally. 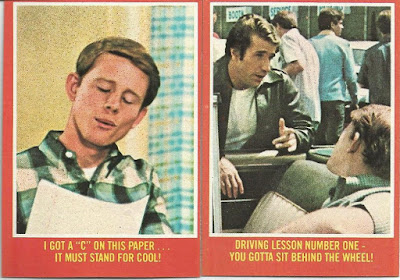 The images are a mix of bad 1970s Topps mixed in with the quality that suggests they were photos taken of the TV as the showed was playing.

We did end up with two Fonz items: a miscut card and a die cut sticker, so it's not all bad! 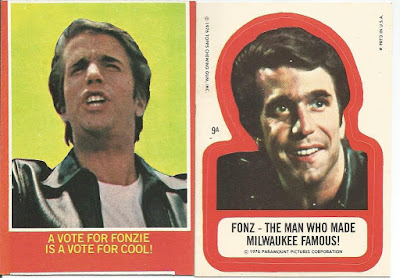 As I mentioned above, the backs show either a puzzle piece or text about the image on the front. 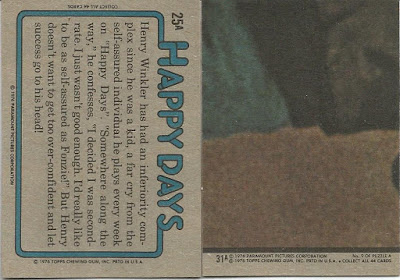 The pack did come with the gum, which you can see the residue from where it had been stuck to the back of the sticker. No, I didn't try to eat gum from the same year the country celebrated its bicentennial. Yeah, let that sink in... 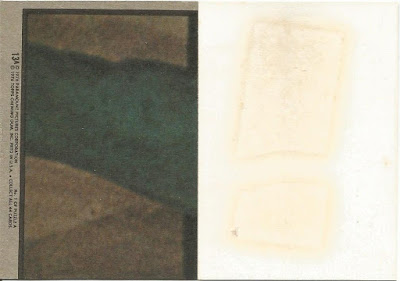 *Side note: Is it just me, or does the Fonz in the sticker look like Greg Salazar from Science Studio? Okay, maybe not quite...

I liked the show but was never crazy about the Fonzie character. I do like Henry Winkler. The captions on these kind of cards are always on the cheesy side. Gotta go with it.

I've seen each episode 10 times I'm sure. A great show for sure. Cards don't quite live up to the show but a good post. Thanks.

I wonder if Topps featured any cards with Arnold (Pat Morita). If so... I'll have to track them down.