Written by Billy Kingsley at 4:30 PM
The latest NBA set to release is Donruss Optic- a chromed up version of Donruss. Think of it like the Panini version of Topps Chrome. While the set is available in several packaging variations, today I'm going to take a look at one of the packs from the blaster I got. 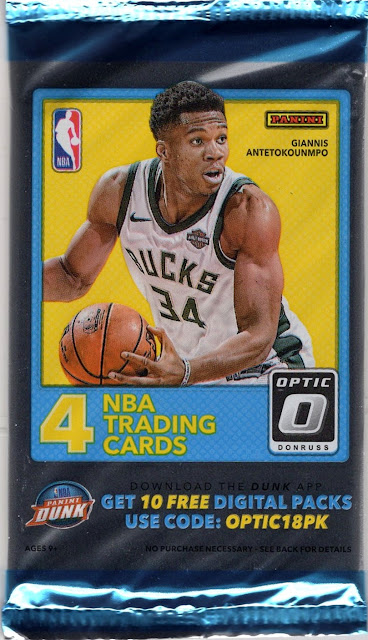 First out was Rockets rookie Zhou Qi. He's from China and is one of the taller players in the NBA. Like most players from China, Zhou is his last name, or more properly, surname. It's what's on the back of his jersey. He's got a lot of potential but right now remains somewhat raw.
Following him out of the pack is the Wizards' Markieff Morris, one half of an identical twins pair. His brother Marcus plays for the Celtics. They even have matching tattoos!
Each pack gives you one non-base card, either a parallel or an insert, and it's always the third card in. In this pack, it's an insert, Hall Kings, which is horizontal.
Elgin Baylor is one of the most underrated superstars in NBA history. Unfortunately for him most of his career predates the time when every game was taped and highlights were shown all the time. He pretty much invented the highflying game that Dr. J. and Michael Jordan and others have made so successful. One good thing I will say about Panini is that when they include a vintage player in  a set, they usually include the period correct logo. This card is no exception. You can see the back by clicking HERE.

The final card in the pack was rising Nuggets superstar Nikola Jokic.
As is usual with all Chrome style cards, they look much nicer in hand. The borders on the base cards are white with tiny chrome diamonds, while the rookies are blue and gray themed, two totally different designs in the same set.

Here's one of the backs, from a card out of a different pack. 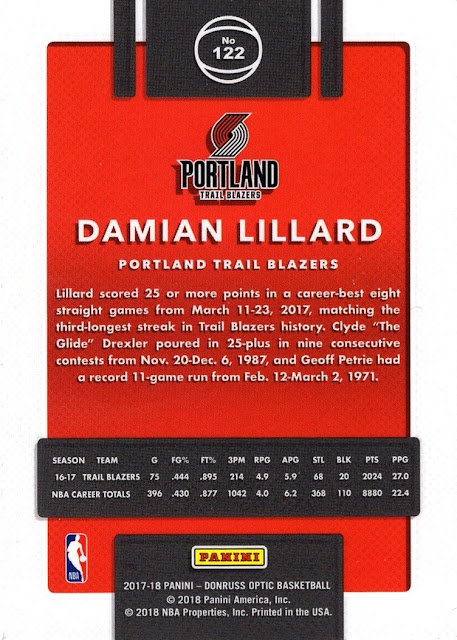 Thanks for reading, and if you want to see a lot more NBA coverage, please check out my own card blog, Cardboard History.

These are nice looking cards. If there's one non-base card per pack, I might have to take a gamble on some.