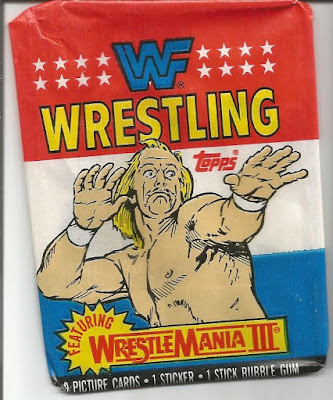 In a world where people did NOT confuse the World Wildlife Foundation with the World Wrestling Federation, Topps made wrestling cards. That's right, kids. If you do not know the story of why the WWE (World Wrestling Entertainment) is called that, here's a brief history lesson: In 2002, the World Wildlife Foundation (WWF) said that the use of the "WWF" initialing was too confusing to consumers and took the World Wrestling Federation to court over it. The court ruled that the WWF (as in wrestling) had to change its name and initialing so that unsuspecting donors to the WWF (er, the wildlife people) wouldn't get confused as to which organization they were donating. Seriously. That's why the WWF (wrestling) became the WWE. I guess the wildlife folks didn't put a lot of stock in their own patrons. Frankly, if I had been a WWF (er, wildlife) patron, I would have been highly offended that the WWF (wildlife) thought I would get them confused with the WWF (wrestling).

In any case, each pack has 9 cards and one sticker. Our sticker is the awesome George "The Animal" Steele! He had a penchant for biting turn buckles and eating the stuffing out of them - quite literally. Perhaps changing to "Entertainment" was the right move after all... 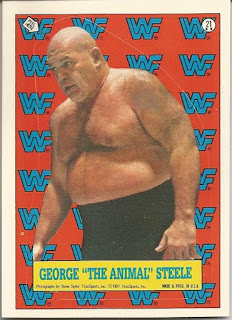 The cards feature an array of designs. Some are American flag-inspired like these below, featuring Hulk Hogan, Ricky Steamboat, and King Harley Race (who looks suspiciously like King Roland from "Spaceballs:"

Other card fronts include a ring-inspired border and a TV border that looks like it came straight out an MTV bumper: 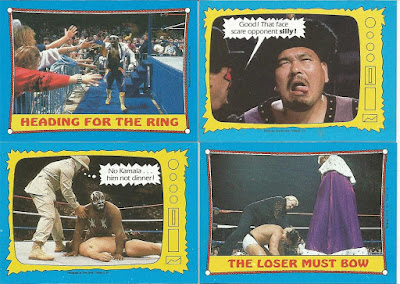 The backs of the cards feature information about the image/person on the front: 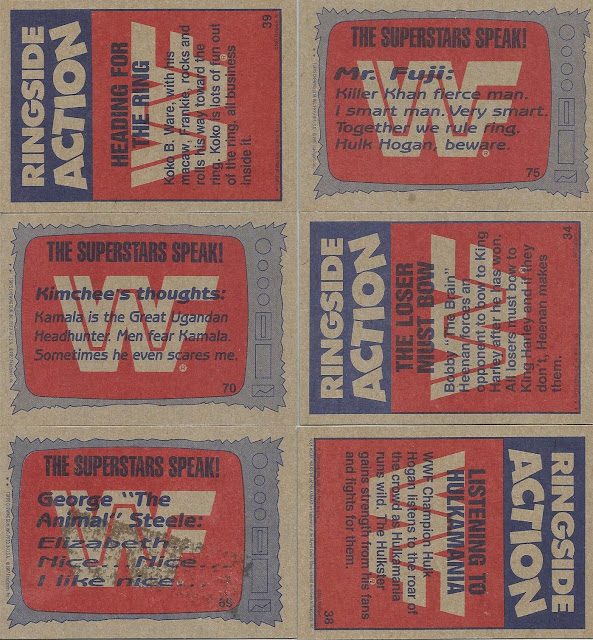 These cards bring back memories from when I was a kid. We went to several Wrestlemania events at the old Civic Arena in Pittsburgh, plus an untold number of "studio wrestling" events held at local high schools, etc.

This is my dream pack. Steamboat, George The Animal Steele, and Hogan = Awesome

This set will always be special to me because it's the first wrestling set that I had cards from.

On another note, the stupidity of that lawsuit is why, even though I love animals, I will never donate money to them. I'll just stick to local shelters.

Finally, my favorite 'rassler as a kid....RICKY THE DRAGON!

Good stuff. This set was never on my radar until recently. Good old fashioned design for sure.

Had no idea that's why they changed the name. Thought it was some "re-branding" thing. But I don't follow wrestling.

Great pull and fun cards. I knew they had gotten sued but had no idea who it was that sued them. Thanks for the history lesson. Great job and pack.

But did you eat the bubble gum? :o