Written by Twitch at 5:45 AM
On September 1st, 2018, Cody Rhodes and the Young Bucks held the biggest non-WWE event on US soil in more than a decade.  To commemorate the occasion, wrestling megasite Highspots.com released a card set.  And here it is. 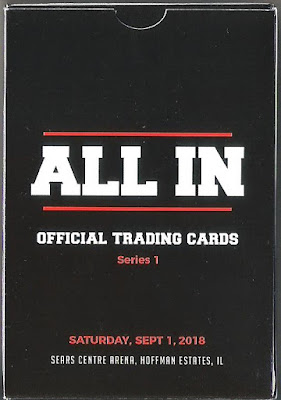 We're over a month clear of the event at this point, but I'm not going to do much besides just show the cards here.  No spoilers, or even a whole lotta jibba-jabba in general.  I highly suggest you seek it out for yourself.  It's so worth it. 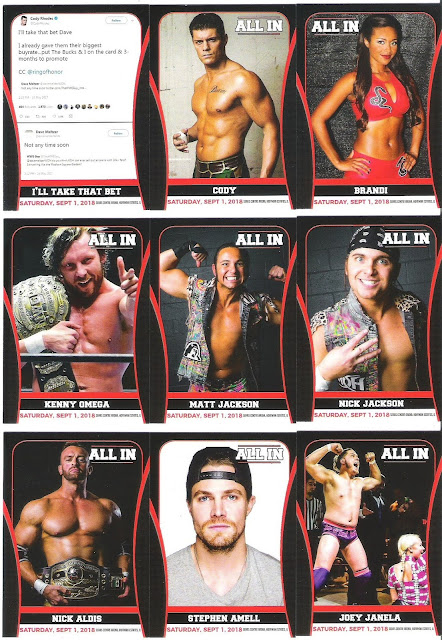 Yes, that's TV's Arrow himself, Stephen Amell.  You might remember him tagging with Neville in a victory over Stardust and Wade Barrett at SummerSlam in 2015, and he's been intermittently involved with Cody & the Bullet Club more-or-less ever since Cody left WWE. 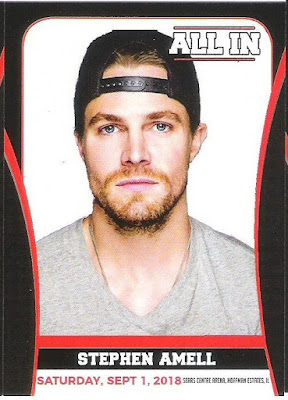 He stepped into the ring against the ageless all-time great Christopher Daniels at the event. 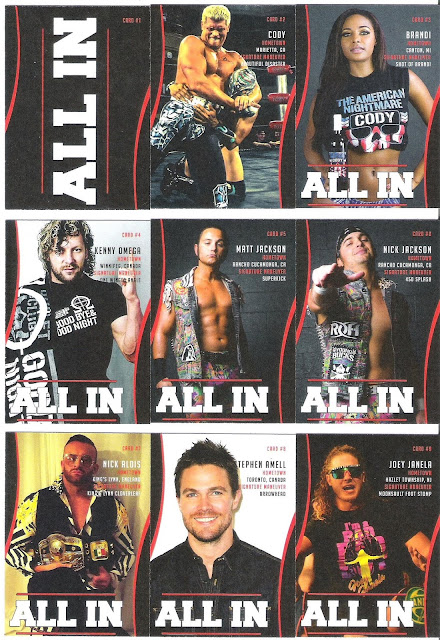 There isn't a whole lot going on with the backs, but you do get a second photo at least. 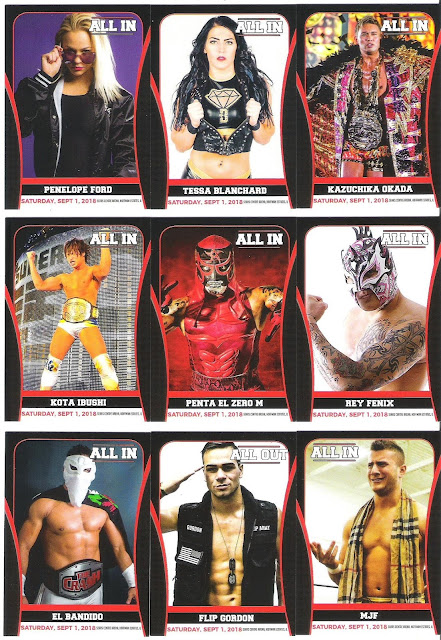 As you can see, there was some absolutely top-tier international starpower on this technically indie card. 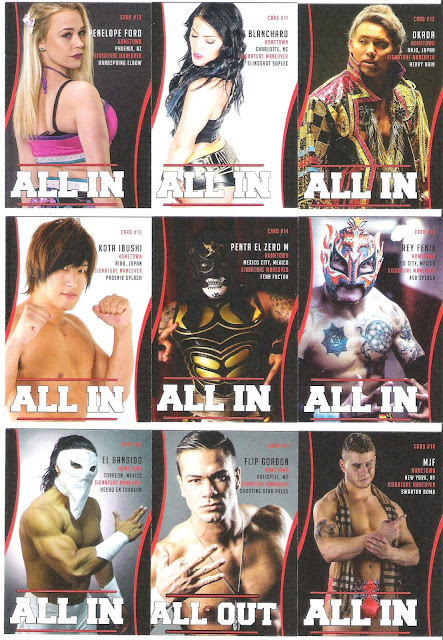 The only major downside of this set is that they are crazy thin.  Like pretty Panini Complete thin.  The unglossed backs even feel a lot like Complete did. 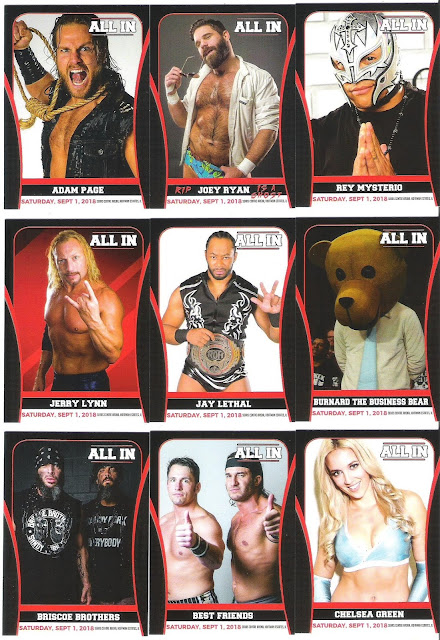 Still though, it's a very worthwhile commemorative set with a lot of guys & gals (& bears) that don't really have much, if any, easily accessible cardboard to speak of.  And that makes it worth the price of admission ($19.99 + shipping) all by itself. 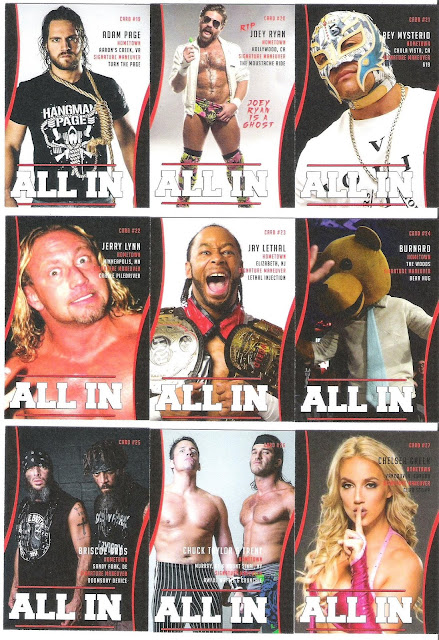 From what I understand, the set was included as part of a monthly loot crate-style box, and they kept a few out for individual sale, which is how I got mine. 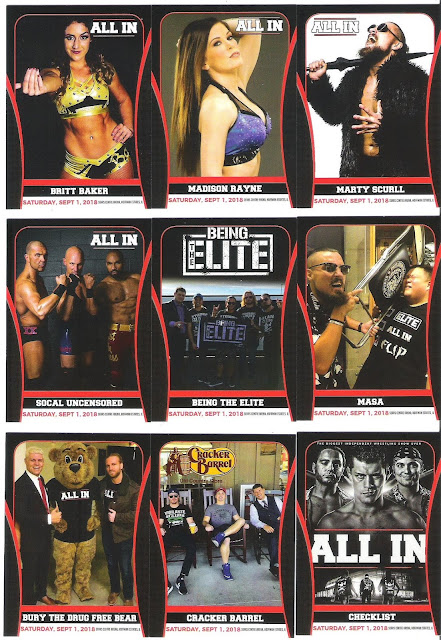 I literally just stumbled onto some dude showing off the ones he got signed on Twitter & then immediately went off to see if I could secure a set of my own, lol. 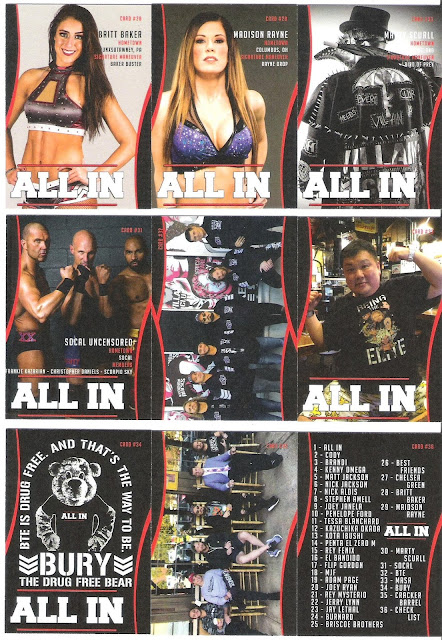 I don't know if they still have any sets left, but if you like what you saw, you can certainly go check.  Go watch the show itself while you're at it.  There's something for just about every wrestling taste on there, so you're bound to find something that's to your liking.

And that be that. Here's hoping there's a series 2 to go with ALL IN 2.

Email ThisBlogThis!Share to TwitterShare to FacebookShare to Pinterest
Labels: 2018 Highspots.com ALL IN Series 1

A trading card of a tweet? Now I've seen everything!

I'd considered picking these up but the price tag was a bit of a turnoff. That being said, those are some pretty nice looking cards.

As much as I hate to give my money to anything that involves the Young Bucks, I kind of want these.

Britt Baker looks a lot like my first wife did, except Britt's certainly taller, a little bit hotter, and probably not a cheating skank.