Written by Billy Kingsley at 10:38 AM
A couple of weeks ago, I took a trip to New York City and found 17 packs of the 1994 DC Master Series at Midtown Comics' Grand Central location, and I bought them all. Here's the breakdown on one of them. 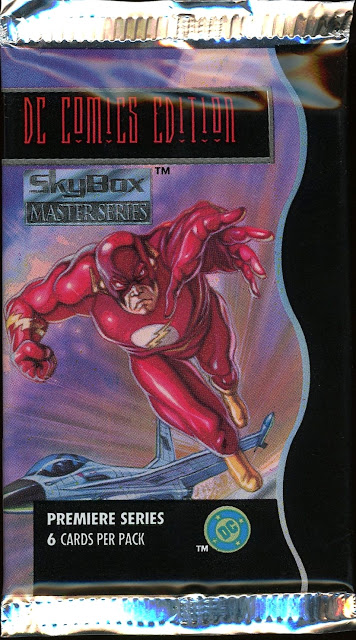 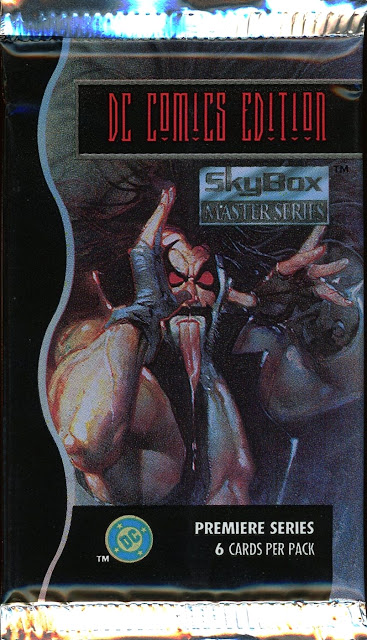 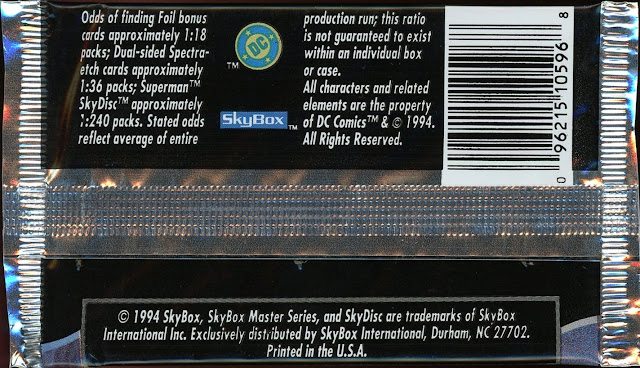 The packs have two different designs, featuring Flash and Lobo. There is no difference in which cards you could pull from which pack, and there are only three inserts and no parallels to look for. Pack backs are slightly different, this is the Lobo back, the Flash pack has none of the "wave" behind the copyright box. 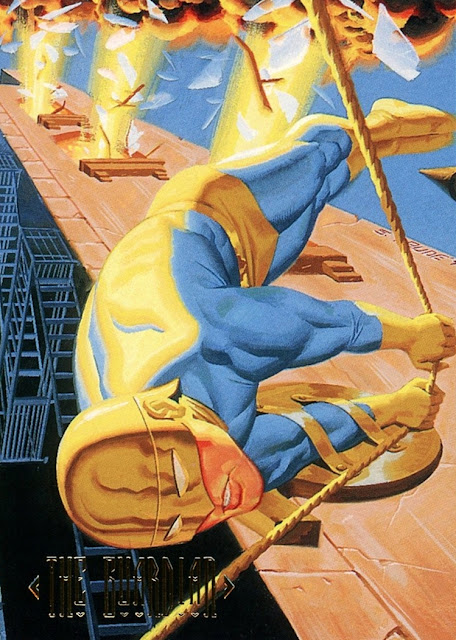 One of Superman's supporting cast, there have been multiple people to wear the Guardian costume, including Superman himself. Guardian is a Metropolis policeman in his secret identity. 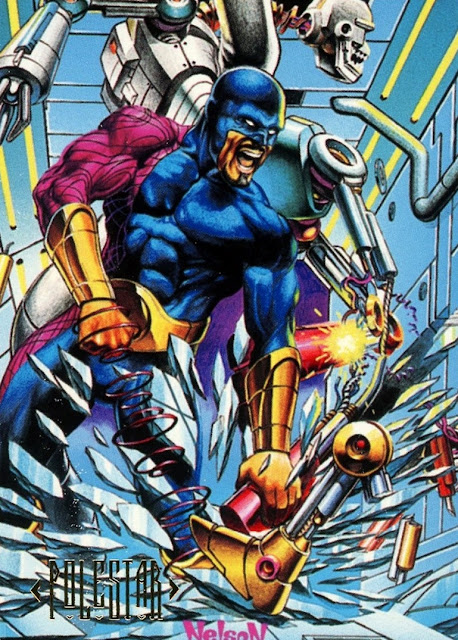 I am a huge fan of the Legion of Super-Heroes, but not how the original team ended. This is actually Cosmic Boy. Everybody else hated what was done to the original Legion as well, and by the end of 1994 they had restarted their continuity, never to reference this storyline again. 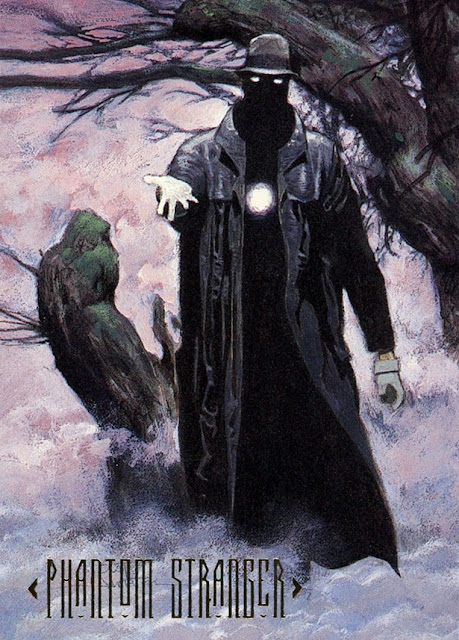 One of the most mysterious characters, by design, I always enjoyed Phantom Stranger stories. Often listed as an honorary member of the Justice League, he never actually joined the League, but appeared when necessary. 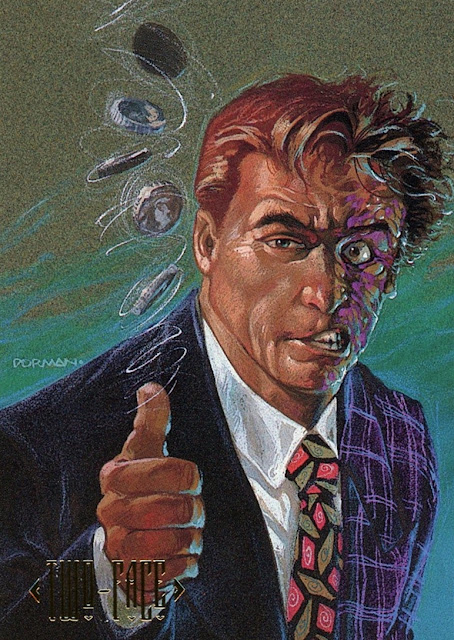 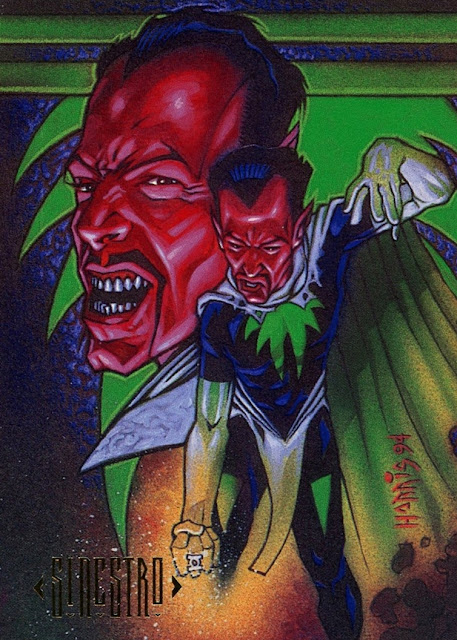 The rogue Green Lantern, Sinestro played a huge role in the Green Lantern series from the 1960s on, in my opinion the Sinestro Corps War, which occurred circa 2008, is the best GL storyline ever. 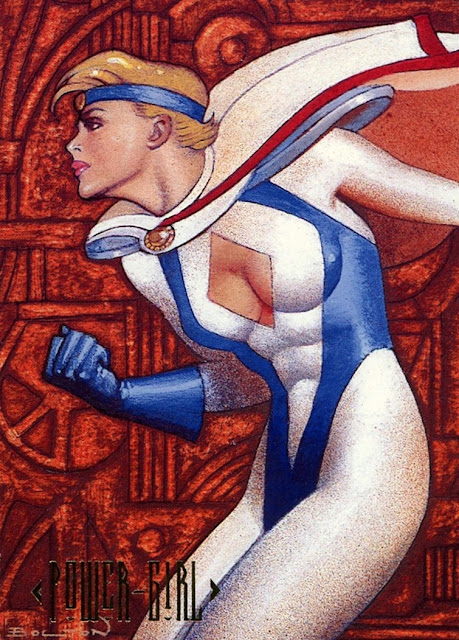 Power Girl's had her story re-written more than almost anyone besides the Legion.  (mostly due to the fact that DC hates it's own history) Frequently attacked by non-comic readers due to her costume design, she actually has quite a bit of depth to her personality, and led the JSA (My favorite team, and title) for a long time.

Here's a card back: 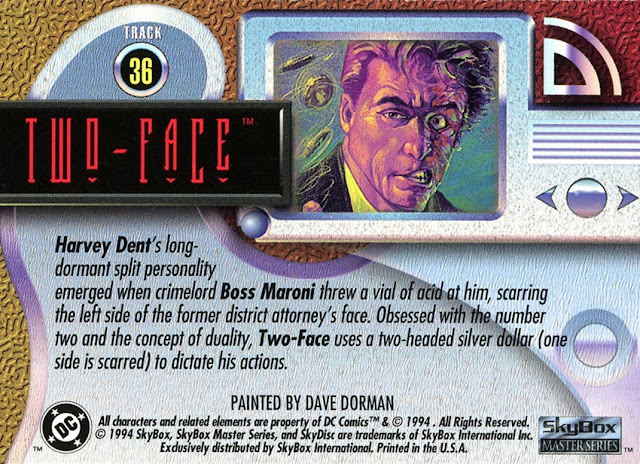 One unfortunate thing is that, since the packs have been sealed up for 25 years, a lot of the cards have taken some damage from sticking. Cards need to "breathe" and these were unable to.

There's also quite a bit of duplication. Although I did not open all the packs yet, I've opened 8 of them and this was the only pack to not have a single duplicate. And I didn't have too many cards to begin with, only about 25 of the 90 card set.