Written by Nachos Grande at 8:00 AM
It's been quite some time since I was able to post a pack here at A Pack to Be Named Later.  Since I don't generally have the money, time, or ability to go out and nab the most recent products, by the time I get a pack of something new it's almost always already been posted here.

This time though, I believe I am first with a 2019 product!

This isn't any old pack though, it's a special Pokemon pack out of a box of Lucky Charms.  According to the pack wrapper, this is a Let's Go, Kanto pack but since I have never played a proper Pokemon game your guess is probably better than mine as to what that actually means.

Each cereal box pack comes with three cards, one of which is foil.  According to the checklist, there are only 13 total cards in this set - five foil cards and eight standard cards.  Let's see what I got out of my lone pack. 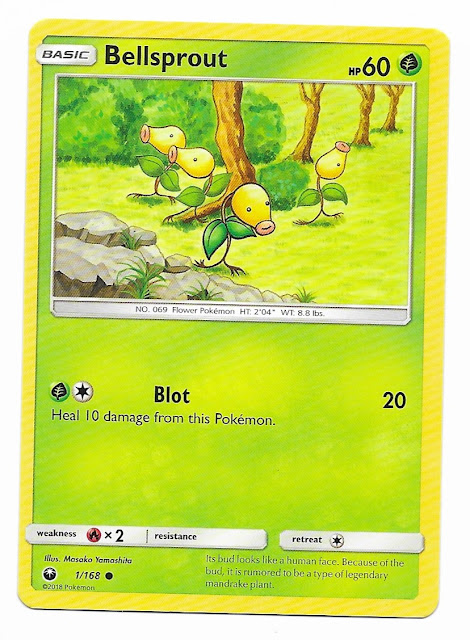 Now, I have to admit that I did give Pokemon Go a try back when it was all the rage.  At least that game introduced me to the names of some Pokemon, though I gathered from others that Pokemon Go really isn't anything like a "real" Pokemon game.  Still, I do recall seeing Bellsprouts all over the place - in Pokemon Go they were pretty crappy little critters and super common.  I don't know what any of the symbols on the card mean but I can only imagine that the leaf has something to do with the fact that this is a green creature. 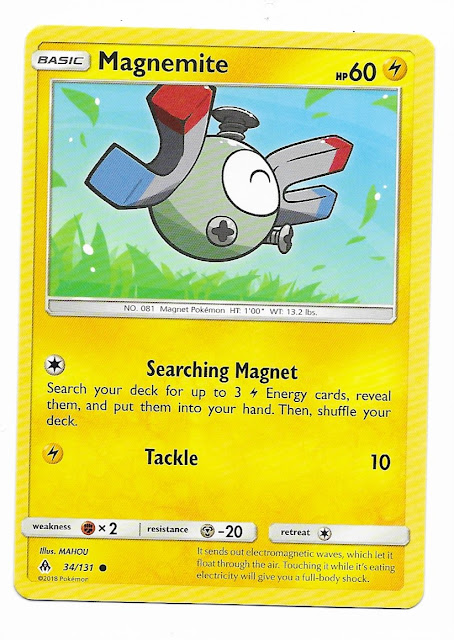 In Pokemon Go, this was one of the last critters I nabbed before I deleted the app from my phone.  As I recall, he wasn't actually rare or special but rather he simply didn't "live" near me at the time.  This guy can tackle though for some lightning, that seems good right?  Also, back in the day I did used to play Magic some so I do know that cards that let you search your library are generally a good thing. 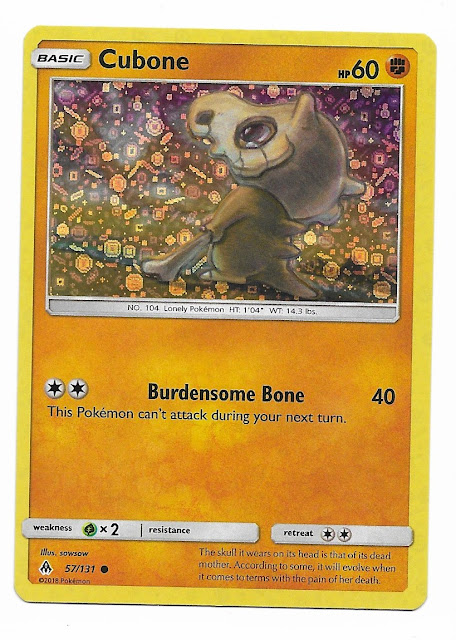 Cubone is my foil card from the pack and based on the names of the other four possibilities I'm guessing this is the worst of the bunch.  I also have to think that having the ability of "can't attack on your next turn" is generally bad for a card game based on attacking.  The real thing that caught my eye here though (besides the kind of cool foil work) is the flavor text at the bottom right of the card.  It's probably tough to read in the scan but it says "The skull it wears on its head is that of its dead mother.  According to some, it will evolve when it comes to terms with the pain of her death."  That's some seriously dark stuff for what is basically a little kid card game!!

If you are interested in this set, here's the checklist that also comes with the pack of cards.

I won't be buying specific cereal boxes in an attempt to get more of these packs but I do appreciate getting packs of cards in my cereal boxes!  I did used to buy up lots of Post Cereals back when you could get Post baseball cards in boxes.  Now if someone brings back baseball cards in cereal boxes you better believe that I'll start eating a lot more cereal!

Holy crap, that really is some dark text for a kiddie card game!

I legit feel bad for Cubone now , so sad , love the artwork on the card though , it even has him looking up to the sky for his long lost mother.

These are also inserted into marked boxes of Cinnamon Toast Crunch and my girls (7 & 9) have been begging me to buy more of the cereal (1) because they love it and (2) because of the cards. So far we've opened 3 packs I believe. The latest pack was opened this morning and they were thrilled to pull a foil Pikachu.