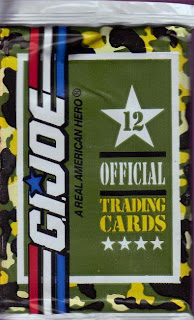 In honor of "GI Joe: The Rise of Cobra" being released today (August 7, 2009), I thought it fitting to break out some "classic" wax of our favorite heroes. 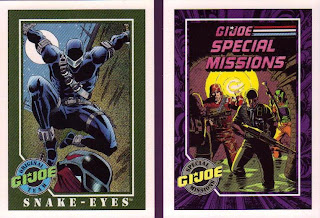 Here, Snake Eyes gets the jump on a COBRA agent. We also see a "Special Missions" card, the back of which features "Tunnel Rat." When you need to scour the bowels of the earth's cities for enemy COBRA officers, he's your guy.

The next trio sports the Attack Cruiser, Dr. Mindbender from the GI Joe Honor Roll, and Toxo-Viper II. Yeah, I don't remember that guy.

Hey, look, it's the guy they named a truck after: Pathfinder! The next "Special Missions" card features Slip-Stream. He's the pilot. Then we have yet another character I never heard of, Desert Scorpion. He's a 1991 COBRA Recruit. I have no idea what that means in the scheme of the set. 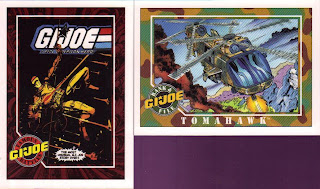 Next up, we have "The most unusual GI Joe story ever!!" To summarize, Storm Shadow kidnaps Scarlett, Snake-Eyes goes solo to rescue her, but she got tired of waiting and escaped on her own. While Snake-Eyes and Storm Shadow were fighting, Scarlett steals a COBRA Claw Flying Wing to save Snake-Eyes' butt. The joke is on her, though, because Snake-Eyes grabs Storm Shadow's sword out of the air before it can hit her vehicle. Well, I've gotta admit - that was unusual. Oh, and we have the Tomahawk. 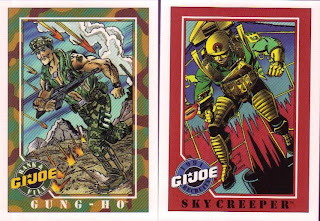 Finally, the Village People show up, represented by Gung-Ho. It's my understanding the movie will make him more 'of a man's man' instead of Schneider on "One Day At A Time." To finish out the pack, here's another 1991 recruit: Skycreeper.

I hope the movie is better than these cards... Actually, the cards themselves aren't bad. Cool artwork on the front, ample bio/details on the back. Impel blows Topps away as far as quality in my book - at least as far as what I have seen so far in oddball wax packs...

The most unusual G.I.Joe story ever told was in issue 23 I think. It's my favorite issue. I really liked the comic books and TV show when I was a kid. I must of missed these cards though. They look really cool.

Heh-heh, I was just quoting the back of the card. :-) I thought it was funny that Impel would label it that.

Came across this via Google while searching for info on these cards...

If you end up reading this random resurrection, the reason that card talks about "the most unusual GI Joe story ever" is because it didn't use any words or sound effects. This is widely recognized as being a unique and influential issue from a general comic artist and/or fan's perspective. They probably wouldn't have been too far off by calling it "the most unusual comic book ever".