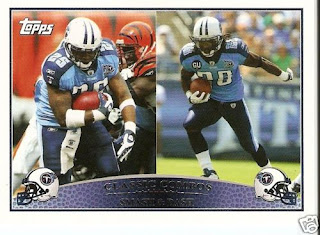 I was shopping at my local Walmart when I had racked up a total of about $16.00. With four Lincolns in my wallet I decided to take my chances on two 2009 Topps packs rather than save the four bucks. If you don't already know I am attempting to collect the whole set. I am at the point where I am starting to get numerous doubles per pack except for the rookies and high number cards like classic combos, postseason highlights and Pro Bowlers.

The first pack was odd from the start. Generally I have noticed that the rookies are the first three cards, but this time I had Samari Rolle as my first card, and found only one rookie in the middle of the pack (Sammie Stroughter) Then, I saw something familiar; A Walmart exclusive All-American insert. My first two have been of Javon Ringer and Jeremy Maclin. This one was of 1st overall pick Matthew Stafford. Check it out: 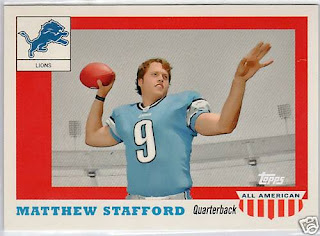 I also got a gold version of the Peyton Manning Topps Town interactive card. Other than that it was just commons (Charles Woodson, Laverneous Coles, Torry Holt to name a few). The second pack started off with a bang as the second card was also of the first pick in the Draft. That's right; moments after pulling the All-American Stafford insert I pulled his base set rookie card! I also got an Everette Brown rookie and I got a nice classic combos card of Chris Johnson and Lendale White "Smash and Dash". 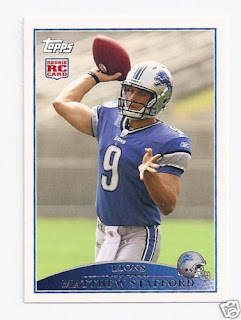 These were some nice pulls that will help me complete my set, so I am pretty pumped. I don't think Stafford will be the QB that everyone is hoping, because he is going into a pretty bad situation. It may be the worst situation in proffessional sports probably right behing playing for the Pittsburgh Pirates (atleast if your good you'll get traded). This does however help me complete the set and I am rooting for him to revive the Lions. Anyway, I'm glad I took the chance.