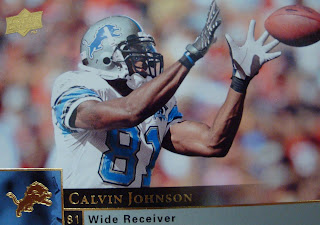 So I went a little crazy; I bought a three dollar pack. I know I splurged and that my money would be better spent on eBay or at a hobby store, but I couldn't resist. Besides it would cost me $10 in gas to get to my nearest hobby store and back, so I went ahead and got a 2009 Upperdeck football back ...retail.

At first when I opened it and flipped the cards over I noticed the lettering on my Calvin Johnson was gold. After opening UD Baseball packs I thought this was going to be a numbered insert. To my dismay this was simply the base design of the card. Don't get me wrong I like the gold lettering; it just would have been nice to have a Calvin Johnson insert. I thought it was odd that an insert would be the first card.

In the Upperdeck packs you get: 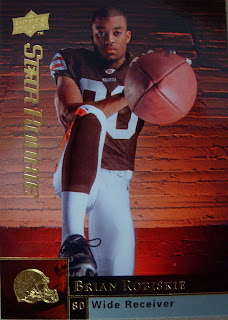 That's right the beloved foil "insert" (it's basically a subset) was nowhere to be found in my retail pack. It's a little disappointing, because I always liked helping people collect the whole starquest set. Plus, I loved the super rare versions that came every once in a while. Anyway, one of my Rookies was of Phil Loadholt of the Vikings and the other was of Brian Robiskie Cleveland Browns WR. I like the Robiskie; although I generally don't like non-action photography this card is pretty cool and Upperdeck usually pulls this off pretty well.

So far I've mentioned my two rookies and a Calvin Johnson, but there were fifteen more base set cards: Brady Quinn, Jerricho Cotchery, Maurice Jones-Drew (one of my favorite non Ravens),
Frank Gore, Michael Jenkins, Visanthe Shiancoe, Jamal Lewis, Antonio Pittman, Bradie James, Terell Owens (Wish they could have gotten him in a Bills practice jersey or something, but I guess that is hard; he rarely goes to practice) Lance Moore, Albert Haynesworth, Cortland Finnegan, TJ "Who's your Mama?" Housmandzadeh and Marques Colston. Here is what the back looks like: 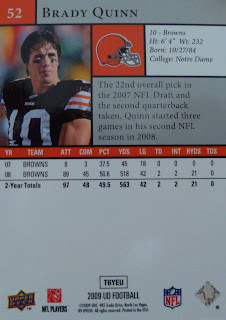 I don't think I am going to be buying too many of these via retail. Although memorbilia odds are 1:24 I just don't like spending $3 a pack it gets spendy pretty quick. I do like the design and I know that UD rookies generally generate more value than Toppps or any other base set rookie, but it seems like you have to buy a hobby box to stand a real shot at getting anything good.