Written by Joe S. at 4:45 PM
Whew, it's been a while since I posted anything here... sorry 'bout that. The last pack I posted was 2006 Fleer Tradition. This post features 2006 Fleer, ummm, regular. 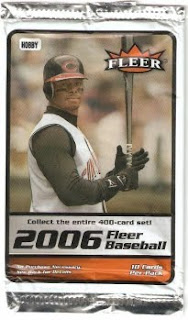 Already I like it better than Tradition. The pack features a much more subdued photo of Griffey over a blurred background. Other than the occasional action shot, I’m a subdued baseball card kind of guy. I like things that are simple and clean, so I’ve got a hunch that I’ll like this pack more than the Tradition pack no matter who or what I pull.

Like its 06 Tradition couterpart, there are no insertion promises on the back other than a random assortment of 2006 Fleer Baseball trading cards.

Also worth noting is that this is a hobby pack (as opposed to retail), even if it only means that I’ve got a slightly better chance of pulling a nice insert. Maybe it’s just me, but I feel like I get more bang for the literal one buck this pack cost me this way.

#137 Brad Penny, #222 John Patterson, #1 Adam Kennedy. Woah – I didn’t realize these had the “matte” finish of the Fleer cards from the late ’90s. I won’t have to worry about smudging if I send any of these away for a TTM autograph attempt. Kinda cool that both Penny and Patterson are looking right at the camera, and you gotta love Kennedy’s flip-up shades!

#LC-7, Bobby Abreu Lumber Company. One of my favorite Fleer insert sets over the years, especially when the entire back ground looks like a bat. I’m a sucker for cards with faux wood on ‘em. 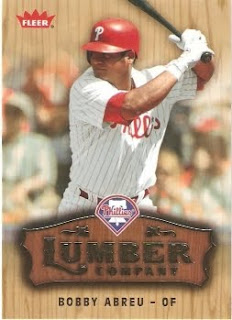 #145 Jeff Kent, #400 Tino Martinez, #179 Felix Hernandez. I bet Kent is making some sort of snide comment to the runner, to which the runner is politely smiling and nodding even though he’s thinking, “Man, this guy’s a tool.”

Sorry about the mini pics, I must've selected the wrong file sizes. Blogger can be a bit of a pain when it comes to shuffling photos around so instead of re-doing the whole thing on a Friday afternoon, click on the scans for larger images if you're interested!! I can’t say the actual players were better than those pulled in the pack of Fleer Tradition, but I do like the cards themselves more. Most people seemed to really like Tradition, but I’ve always preferred a cleaner look. Like I’ve said before, the fact that there’s so much variety out there is what makes the hobby great… or at least what used to make it great.

Email ThisBlogThis!Share to TwitterShare to FacebookShare to Pinterest
Labels: 2006 Fleer