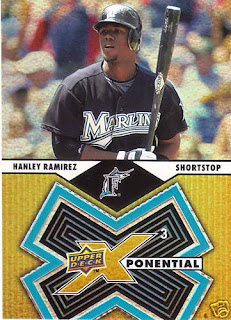 Lately I've been busy packing for college, finishing up work and saying goodbye to family and cursing in my room due to a terrible season opener for the Oregon Ducks. There has not been a lot of time for cards as of late, but the other day I picked up a pack of 2009 Upperdeck X baseball cards from Target.

By far the nicest card I got in the pack was a Hanley Ramirex Xponential 3. The die-cut card in the pack was of Roy Halladay, who is just a ho-hum player to me. I know he is a great pitcher and I like the guy; he stays out of trouble and puts up big numbers, but I have just never gotten into collecting him.

My other commons were of Jason Giambi, Edinson Volquez, BJ Upton and Travis Hafner. I like BJ Upton, so that was a pleasant pull. I'd say this pack was great, considering that I got an insert of one of the best young players in the game Hanley Ramirez and that I got a BJ Upton card its a pretty decent six card pack.

Did the card not scan well?

All I see is a fuzzy picture and a design/color combination on the bottom half that looks taken from the 1970's.