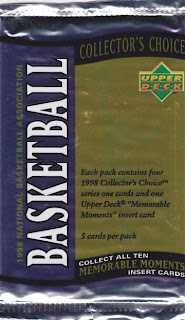 And I'm almost done with the NBA repack box (finally! right?) as this will be pack 7 of 8. As you may recall, there was already a pack from this set posted earlier, but this is a 5 card pack with at least 2 guaranteed insert cards. I wonder how a pricing structure like this might work today. You either get a ton of base cards and barely anything to speak of in the insert/parallel department, or you get an insert-heavy ratio. Of course, I have no idea how this stuff was priced when it came out or how you could obtain either kind of pack. 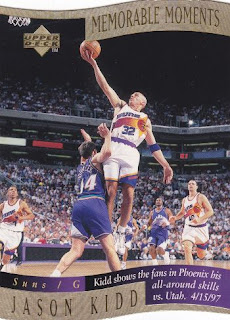 6 of 10 - Jason Kidd Memorable Moments (These are pretty nice looking, although I can't stand Jason Kidd. They have a sort of wavy die cut look to them.) 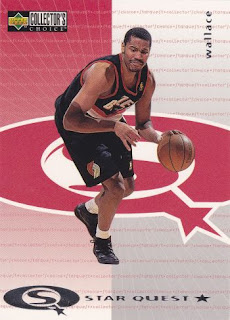 SQ37 - Rasheed Wallace Star Quest * (That's supposed to be a single star. I couldn't find anything else on the keyboard to replicate it. Apparently there are multi-star versions of this stuff that perhaps represented what is now "common", "rare", "ultra rare" etc. these days. I loved 'Sheed as a Blazers, although they could have chosen a better picture here.) 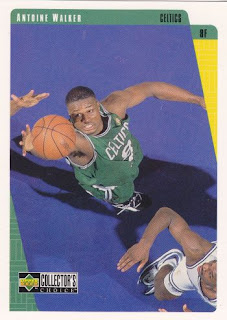 6 - Antoine Walker (Antoine Walker was pretty huge for a spell. I actually didn't even hate the Celtics back then. I remember Walker being on the cover of one of the NBA Live games. Specifically, I remember the commercials with "Cyber-'Toine" in them. It was pretty hilarious. I should try and find that on YouTube someday.) 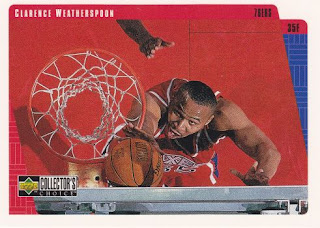 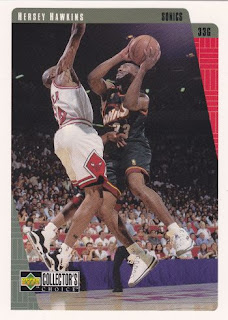 131 - Hersey Hawkins (Hawkins had a nice 14 year career in the league and is now the Blazers Player Development Director.)
One more pack to go and I swear I won't post any more basketball for a long time... or maybe a few days.