Written by deal at 3:54 PM
I am not sure that I got it all but Yes, I think that is the title on the wrapper. 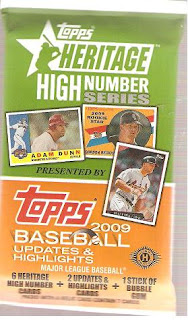 Fresh from the Philly Show which you can read more about at Phungo. I picked up 2 Hobby Boxes of another Heritage product and got the dealer to toss in 5 packs of 2009 Topps Heritage Hi & UnH for 10 bucks - So I look at these as $2 packs! - almost as good as the old days.

The Box these were pulled from looked to be new, but there may have been a few packs from a previous box that had like 4 packs left whenever I passed by the dealer previously. All the packs came from the Right Hand Stack - That's where I pick from.

These packs have roughly the same make up as they did in 2008 - The bulk of the cards are from the 2009 Heritage High Numbers set, while there are two cards from the 3rd Series of the 2009 flagship Topps issue for contractual reasons.

The common inserts are Short Prints 1 in 3 packs and Chrome Parallels 1 in 3 packs. Rookie Performers, Then and Now, and 2009 Flashbacks all 1:12. Real One Auto 1:372, Clubhouse Collection Relic 1:26. Various Other Relics and Autos are stuff of myth that I never pull in a pack.

There were a few Player that the Phils added during the season. The big ones that I would like to add to my collection are Cliff Lee and Pedro Martinez. The odds of getting either of them is probably like 50:1 or so. 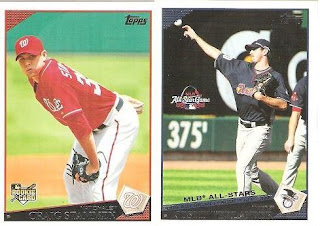 Back to the Fun Stuff:

I got a Phil and am a big McCutchen fan, so that works. A Dodger fan would also likely be happy with this pack - Beyond that only the wacky makeup of these packs is noteworthy.

Two B-Sides for your Consideration: 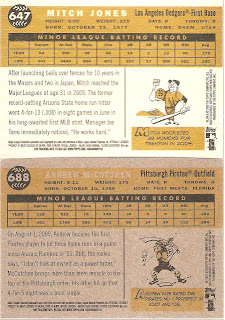 You will likely have to enlarge these babies, Check out the number of minor league ABs for Mitch Jones. 3490!!! With 200 minor league dingers. Lookout Crash Davis.

Sloppy Topps award goes out for the Cartoon on the McCutchen card. The card clearly states that Andrew is Right-Handed (which he is), while the cartoon features a lefty. Just another botched short printed card.

I picked up four additional packs of these cards - I hope to post the results of those packs over at the Home Office later in the week.

If you can't wait that long check out pack breaks here.

Wow. Mitch Jones is 32, played in eight whole games last year and has a CARD?

Suffice it to say, he's a journeyman.