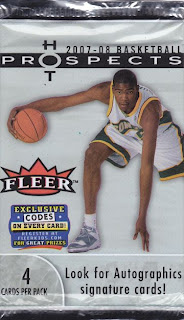 It's onto the next pack in my basketball repack box. Kevin Durant of the late, great Sonics is pictured on the front of the pack as a young rookie. He's currently exhibit A in my theory that the NBA is evolving (or, perhaps, devolving) into a game where there are no real defined positions. At the very least, the line is so blurry between guards and forwards that it doesn't really matter anymore. Put some mobile bodies out there and a decent "big guy" and you have a basketball team. Durant is 6'9", maybe even 6'10" and could probably play almost any position on the floor. A lot of younger talented players are in the same boat. 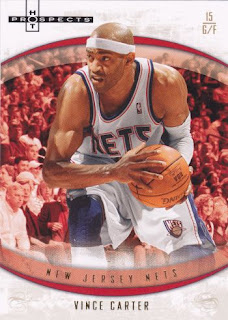 9 - Vince Carter (Carter bailed on the Nets at the right time. They've started off this season a record-tying 0-17. I'm not the biggest fan of his game, but it's clear now that he was the glue that was keeping the Nets from totally disintegrating.) 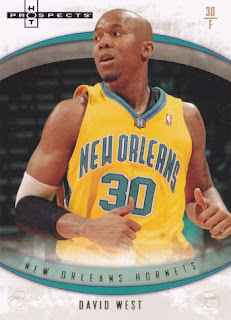 37 - David West (I hope the Hornets have ditched these queasy yellow uniforms.) 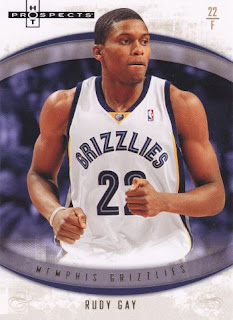 60 - Rudy Gay (I think Rudy Gay needs a change of scenery. He wouldn't be the first Memphis/Vancouver player to need that, but I do think his talents could best be utilized elsewhere in the league.) 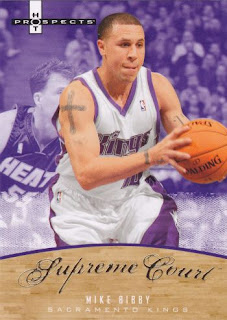 SC-4 - Mike Bibby Supreme Court (Supreme Court was the name of a classic subset turned insert set in early NBA Hoops brand cards. I have no idea if this set is connected in any way, considering all of the brand name mergers over the years.)