Written by Collective Troll at 6:11 PM 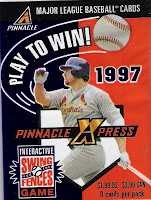 This is my FIRST ever rip on this awesome blog, so PLEASE bear with me… For those of you interested in such things, I am ripping a 36 pack box of this product on my other blog, the Collective Troll and you can view the first 18 packs I opened here…
This product is 1997 Pinnacle X Press… I was a big fan of Pinnacle in the mid-90s, they had cool photography and good designs and a wide array of brands… In 1995 they had Score with was cheap, Pinnacle which was right up my alley, Select which was pretty cool and was my first introduction to a serial numbered card and Zenith which was their premium brand .
This is my 19th pack of this and I aint gonna lie, I am a little bit bored with it. Each pack contains 7 cards, plus a Swing for the Fences game card. I already pulled the case hit (Andrew Jones) and the box hit (Greg Maddux) but I will feign excitement as I open this one up… Here we go!

#49 Tim Salmon California Angels
Mr. Angel they call him, Salmon spent his entire 14 year career with the California, then Anaheim and then Los Angeles Angels… Salmon won the AL Rookie of the Year Award in ’93, but ’97 was probably his best offensive season of his career. He batted .296 with 33 (10th) homers and 129 (4th) RBI. He finished 7th in the MVP vote that year (for the 2nd time) but didn’t make the All Star team or win a Silver Slugger. Every one was slugging like gangbusters in the mid-90s, but I was surprised that Salmon never made one single All Star team.

#76 Henry Rodriguez Montreal Expos
Coming into the ’96 season HR had never topped 8 homeruns in the Big Leagues, but in ’96 he literally came out of nowhere for the Expos and hit 36 homers and drove in 103 (and also paced the NL with 160 Ks). He made his first and only All Star team that year and delivered a pinch hit RBI single for the NL in their 6-0 romp of the AL. Has the National League won since?

The odds were 1 in 17 packs for these bad boys and this is the 3rd I have yanked from this box. Erstad never produced the power numbers that the Angels had hoped for when they picked him first overall in the 1995 draft, BUT by 1997 (at age 23) he batted .299 with 16 homers and 77 RBI and a really good glove at 1st base.

He would finally deliver the goods in 2000, but that is still 3 years in the future.

#11 Cecil Fielder New York Yankees
I USED to really like Cecil Fielder, but then the Yankees traded Ruben Sierra to the Tigers in exchange for Big Daddy and I stopped being his fan.

Between the Tigers and the Yanks Cecil knocked out 39 homers and drove in 117 in ’96 and he was there (and hit .391) when the Yanks won their first World Championship in 18 years. I guess I was happy that Cecil won a ring, but did he have to do it in NY?

#??? Swing for the Fences Game Card featuring Jeff Bagwell
This is some sort of game that I haven’t bothered trying to play. Some cards have a plus or minus number, some have a player. This is neat because it features Bags, but it is paper thin with only contest rules on the back

#127 Brooks Kieschnick Chicago Cubs 1997 Rookie
The Cubs used their 1st round pick (10th overall) in the 1993 draft to select BK after he won back to back Howser Awards with the University of Texas. The Devil Rays took BK in the expansion draft, but he never made it to the majors with them. However in 2003 he had a complete and total renaissance with the Milwaukee Brewers. He became the first and only player in HISTORY to hit a homerun as a designated hitter, a pitcher and a pinch hitter in the same season. In fact as a pinch hitter/DH he batted .300 with 7 homers and 12 RBI in 2003 and as a pitcher he appeared in 42 games striking out 39. Sorry to go forward in time, but I thought that was pretty amazing and had to give BK his props…

#54 Roger Clemens Toronto Blue Jays
1997 was the year of the slugger and it seems like 90% of the cards in this box have been sluggers, but there were pitchers that year, too. ’97 was a monster year for the Rocket. He won the pitching Triple Crown going 21-7 with a 2.05 ERA and 295 Ks. He also picked up his 4th Cy Young Award, batted .500 (1 for 2) and was named to his 6th All Star team… Well, that wasn't too bad, I rather enjoyed myself on that one. I have to say having unopened packs lying around drive me crazy, they keep saying "open me!" but for the sake of the blog, I resist. Hope y’all enjoyed this rip! Thanks to Matt for letting me join the team, there will be more to come! Troll out.

Darin Erstad is "far & away" from being a very good player.