Written by JediJeff at 3:17 PM
We have 8 weeks of the 2015-16 NHL season to be played. The final games take place 8 Saturdays from today on April 9th. I believe the original intent was for that to be the final day of the season, but a couple postponed games due to Mother Nature will be made up on the Sunday after. If you buy any hockey repacks, 2008-09 OPC are a standard within. I usually get 2 in every 10 pack repack I buy. Shockingly, it's never been posted here. Time to remedy that. 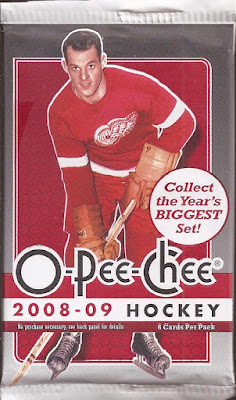 Mr. Hockey on the front. You can collect this year's biggest set if you collect OPC. Technically, that is true every year, as OPC reaches Topps baseball in size. This particular set was 600 cards in size, with 500 base, 61 Marquee rookies (60 and a checklist) and the remaining 39 as Legends. Hits are available, but tough pulls in OPC boxes. 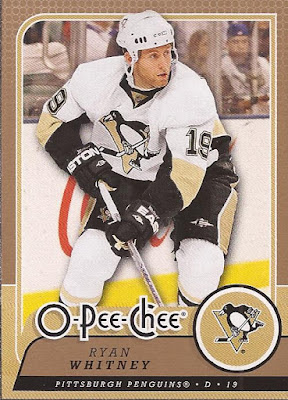 The player "coming out" of the frame, as Whitney does at the top of the card, is a nice feature in the design. Otherwise..... I don't know. The gold is too much. Maybe because the Pens have the color as part of their scheme. Badging is too large. Too much focus on the O-Pee-Chee name and little on the player and team. Granted, if you are collecting the set you only need the logo. While it's nice that the border is not plain white, it doesn't work for me. 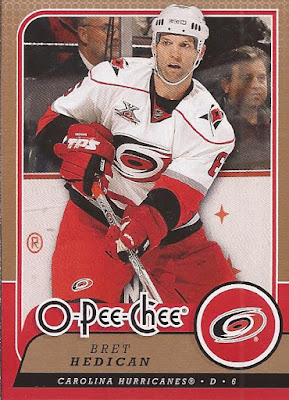 It looks even worse in parts here. The change of the border line to red is nice. But the change to red at the bottom is horrid. Thank goodness Hedican is in road whites. 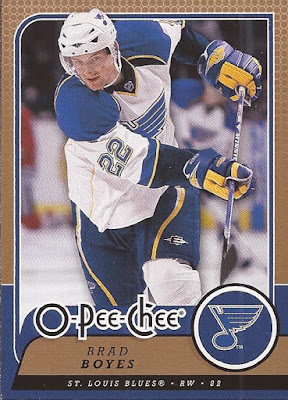 Boyes looks like Quasimodo. His head comes out of the frame, but most of his left arm is gone. 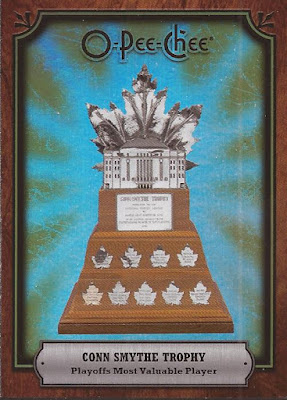 FOIL!!! I am not sure if all the awards appeared as foil cards in the set. I think they did. Here's the Conn Smythe for the MVP of the Stanley Cup finals. Malkin secured it when the Pens beat the Wings in a 7 game series for the Cup at the end of the season. 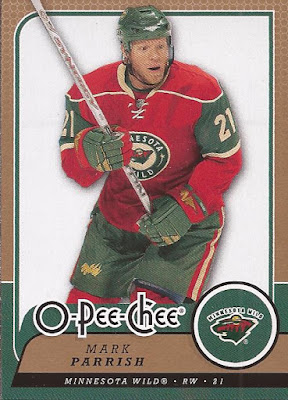 Parrish is a rough sweater for the Wild. So much that I think the Wild wear their alternates more often at home. They should retire these. Red is a secondary color for Minnesota, so making it the base color of their home sweaters is a mistake. 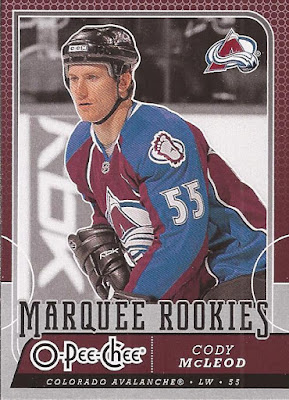 Pulled a Marquee rookie. I think you get either a rookie or a legend per pack. I could be wrong those. Cody McLeod has been putting together a decent career in Denver. The sweater on his back, however..... Hey Avs, you can have this look back. Plenty of teams use the Reebok template and ditch the Bettman stripes. 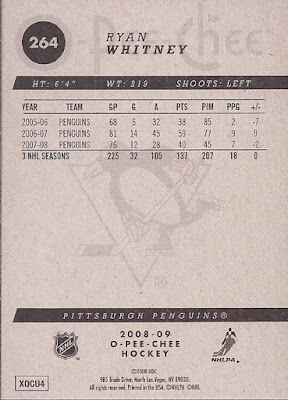 No surprise on the back with O-Pee-Chee. Full career stats. Or a lot of space for taking notes if your career is just a few years.

Boy, did I get some Hockey cards today. I know what I am going to finally finish off that medium flat rate box I've been putting together to send you.

Get at cricbat tips in with all the accurate cricket betting tips report for free with free trial and also we provide.
cbtf