Written by Rebel Coyote at 7:26 PM 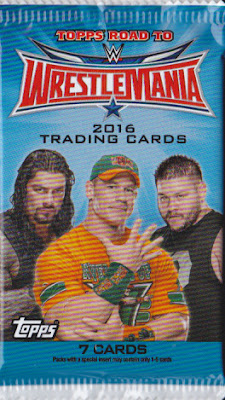 Wrestlemania 32 is in two weeks and I'm going be there live. Let's get the road to Wrestlemania started with this year card set featuring year-end summary review of last year's events. Contains 7 cards a pack. Let's get slammin' 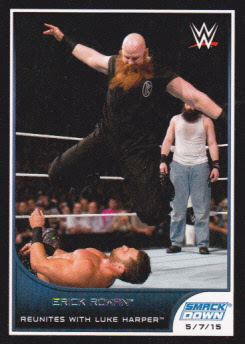 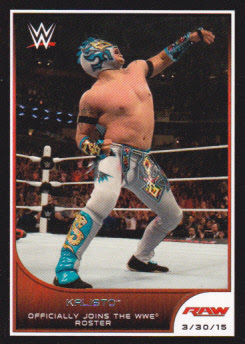 15 - Kalisto Joins the WWE Roster - after being on NXT with his tag team partner Sin Cara (Lucha Dragons) he made his roster debut the next night after Wrestlemania. He is now the current United States champion and will take on Ryback at Wrestlemania. 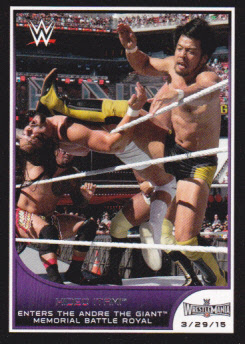 6 - Hideo Itami Enters the Andre the Giant Battle Royal - the former KENTA won a tournament in NXT to get spot in battle royal. He would be sidelined for rest of year with shoulder injury not long after. 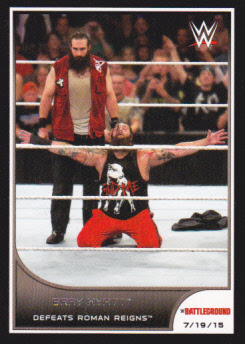 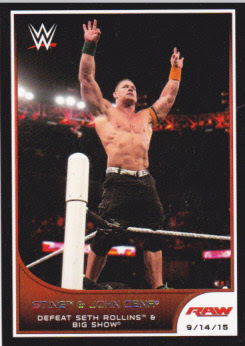 85 - Sting and John Cena Defeat Seth Rollins and Big Show - Sting had three matches in WWE last year and one of them is this tag team match with John Cena. It's the only one he won. Nice how 15 years ago Cena started out and people thought he's the next Sting due his looks. With news of Sting officially retiring he gave his all in his final match against Seth Rollins. 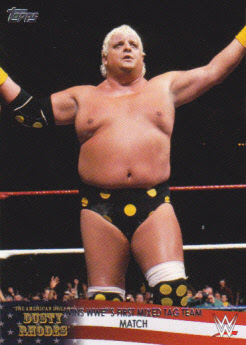 3 (of 10) Wins WWE First Ever Mixed Tag Team Match - Dusty Rhodes tribute subset who passed away last year. This one featured his only Wrestlemania appearance (Wrestlemania 6) teaming with his valet/manager the late Sapphire taking on the late Randy Savage and Sensational Sherri which they won. Depressing consider all four competitors of this match have passed away. 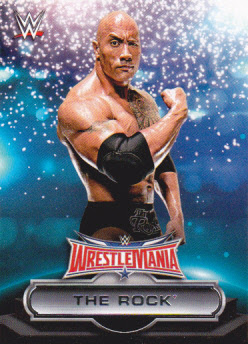 1 (of 30) The Rock - Wrestlemania 32 roster subset. It's the wrestler, the actor, and the most electrifying man in all of entertainment The Rock. Will he layeth the smackdown in 32? Do you smelllll-lalalala-loww what the Rock.....is.....cooking?

I'm ready for Wrestlemania. Can't wait to be there. Maybe bring "Die Roman Die" sign and hope it appears on the telecast.