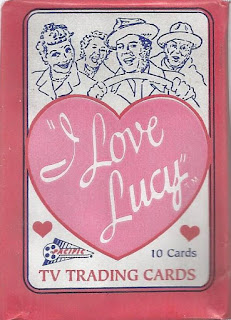 For those too young to know, "I Love Lucy" was a beloved TV show back when it first aired in the 1950's. In 1991 (presumably for the 40th anniversary of the show's launch in 1951), Pacific and CBS created a 100-card set to commemorate the show's history. 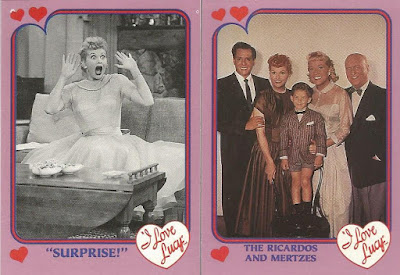 The front of each card features a pink border. And, I do mean pink - like Pepto. There are hearts around each picture and the pink outer border is offset (inset?) by another border that's a darker pink with blue lines. The "I Love Lucy" heart logo from the show is feature in the lower corner of the card face. There is also a line or two of text which goes along with the featured image. The image is generally a still captured from the show and is shown in original black-and-white. Some images, though, are color.

The card above on the right is from the "lost" Christmas special which aired (in the colorized version shown) 62 years after the show's debut! Holy cow! (See what I did there? I tied in the other card's "moo-moo..." Okay, never mind.)

The middle image shows Lucy pretending to be a mannequin. I am particularly taken with the name of the store, as you might imagine (should you be scratching your head, it's my last name). I happen to also be enamored by the fact it features a scene from a fur store. You sure don't see many of those these days...

The card backs also feature a pink border with a darker pink/blue inset border. Inside the inner border, a drawn image of the cast takes up the top 3rd, roughly. There is a heart shape taking up the majority of the back. Inside the heart, information about the image featured on the front and/or tidbits about the show in general. At the bottom, the show's logo, the Pacific logo, the card number and copyright info. 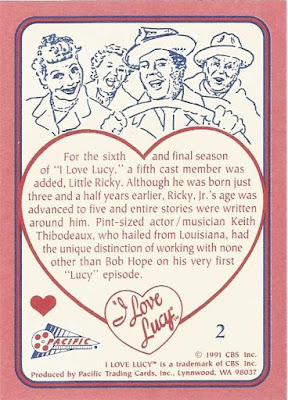 You can find the complete checklist at TradingcardDB.

Email ThisBlogThis!Share to TwitterShare to FacebookShare to Pinterest
Labels: 1991 Pacific I Love Lucy

These are kind of awesome. There should be more card sets of notable shows like this.