Written by Jafronius at 2:22 PM
Greetings!

Anyway, about 2 and a half weeks ago I came across a fully stocked display at the Target toy section when I got in for my overnight remodel shift.  I was briefly concerned it would be all gone by the time I would be able to get a box but then I remembered it was overnight so the chances would be slim to none (I only say that because that same week some overnighters were fired and arrested for stealing, so I guess there's always a chance).

When the shift was over, the store just opened, so I went back to the section to claim my box.  It just so happened that I knew the employee manning Electronics that morning so I flagged him down and told him about the display.  Even though he doesn't collect (and is thus immune to Ohtani-fever), he knew immediately what that meant (i.e. Target exclusive Funko figures), so he pulled all but one and put the rest behind the Electronics counter with a note specifically saying one per customer.  He said he even fielded a call from an angry customer the day before demanding where the boxes were "because according to online sites we had them in stock".

I was pleased by my actions on behalf of the card collecting community and even more pleased that the boxes stayed behind the counter for the rest of the week and weekend.  Unfortunately, when I got in Sunday night all the boxes were moved over to the card aisle up at the checklanes.  The team leader at the checkout lanes wasn't around when I left so I couldn't let her know about the boxes...and when I got in Monday night, they were all gone.  I have no idea who decided to move the boxes up there; they obviously ignored the "one box per customer" note.

I can only hope that some true collectors were able to get a box before the card flippers cleaned us out.  But enough rambling: 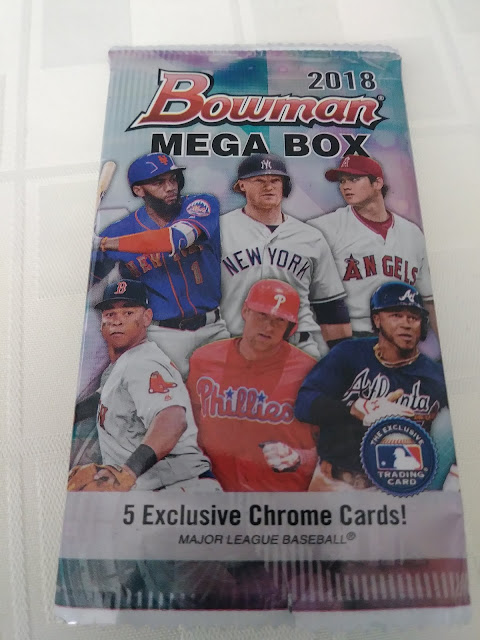 You get 5 packs of Original Recipe 2018 Bowman and 2 packs for Mega Box Chrome for $15.  Here's the checklist.  I only scanned one of the packs so here's what I got: 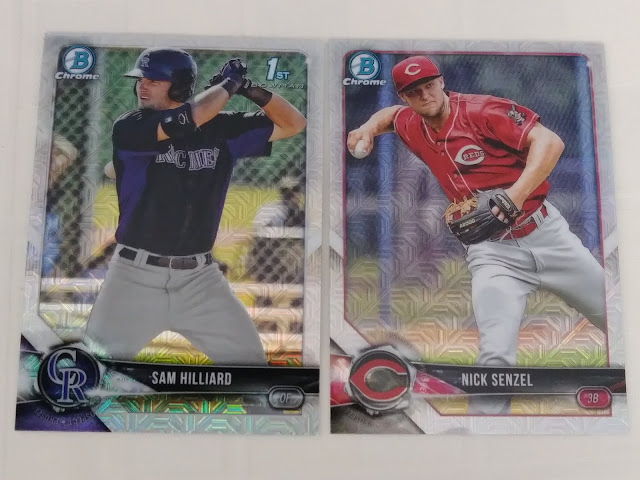 Hilliard is currently in AA for the Hartford Yard Goats.  July 8 is Yoga in the Park Day.  No idea if the Yard Goats will join in on the yoga fun, which apparently is a thing.

Senzel is currently in AAA for the Louisville Bats.  August 11 is Hulk Bobblehead Giveaway night.  I'm not seeing the relationship between the Hulk and the Bats but hey, bobbleheads are cool. 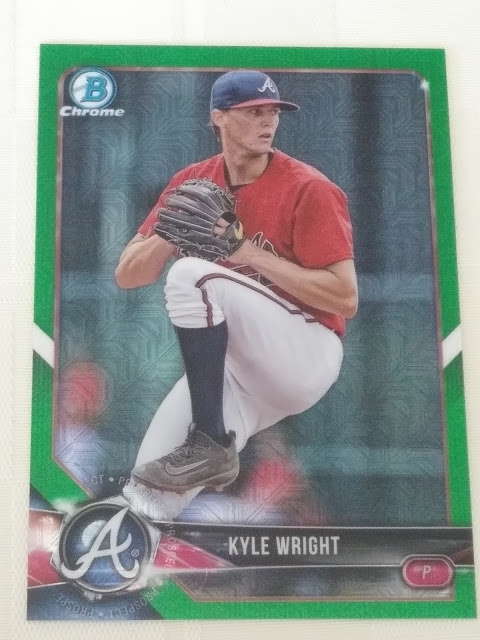 The pull of the pack is this (I assume) Green base parallel which comes 1 out of 16 packs.  Kyle is currently in AA with the Mississippi Braves (boooorrrrring).

August 18 is Princess Night...I guess you need a cool minor league team name to get the cool theme nights. 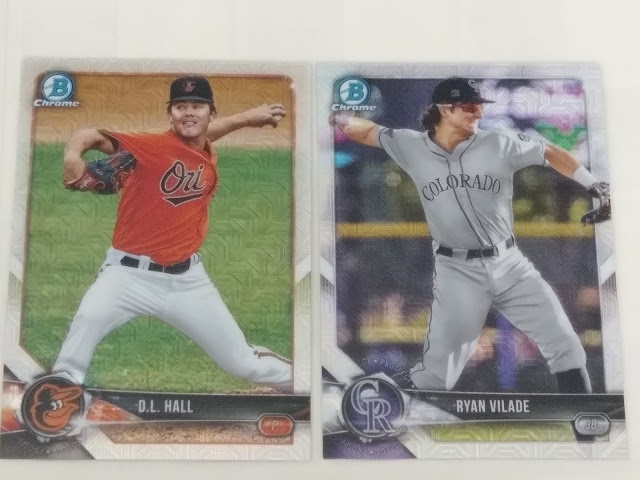 Hall currently plays for the class A Delmarva Shorebirds.  On August 17th, they're shooting a man out of a cannon!  He's done it before, but kids, don't try this at home.

Vilade is currently in class A's Asheville Tourists.  Apparently Asheville is the first minor league park to offer Thirsty Thursdays so they have that going for them. 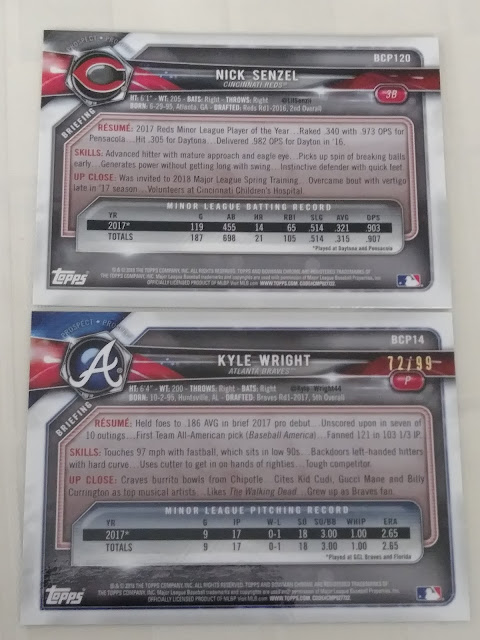 Anyway, that's the pack.  Hope everyone has a good weekend, and thanks for reading!

Good for you for attempting to help the card collecting community.
I'd say Senzel was the pull there, but he just had season ending surgery this week.