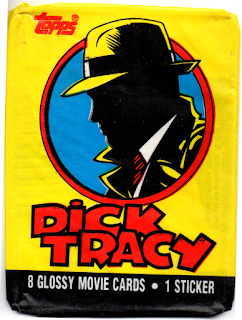 This is a pack of 1990 Topps Dick Tracy Movie cards. The wrapper is traditional wax paper of the era and features a bright yellow background with the Dick Tracy silhouette insignia with "Dick Tracy" in red lettering. The pack contains 8 cards and 1 sticker. There are 88 cards in the set and 11 stickers. Stickers are numbered separately from the base set.

Each card features a bright yellow border with a red and black inset. The center of the card features the card's subject matter in full 90's image quality. In a lower corner, the DT logo and the center bottom contains the card's title. The first card in the pack is "Terror in the Streets:" 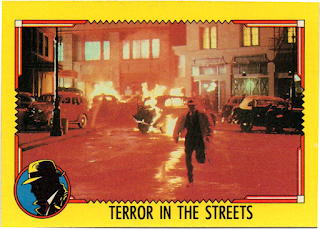 This next card show how awful movie still captures could be printed onto cardboard collectibles. It's got poor exposure, ghosting, and the 90's graininess that Topps was infamous for. The whole card is actually a result of a misfire in the printing process. Ouch. This is "On the Waterfront:" 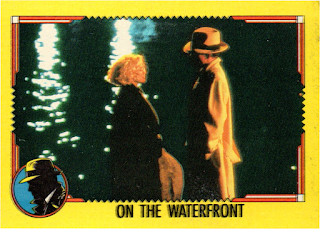 The following card is a better example of what the cards *could* look like when properly printed, but this is about as good as it gets for these. Still, if I had been into the movie in those days, I would have been happy with the card set. This is "The Interrogation:" 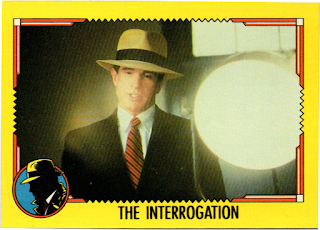 Next, we have our first vertically-oriented card in the pack. It follows the same border/layout as the horizontals cards. This one features "Al 'Big Boy' Caprice:" 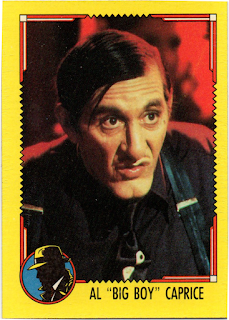 And here, we have our promised sticker. It's number 9, "Influence: Blackmail." We know this is a sticker because Topps so graciously printed the word "peel" in the top right corner: 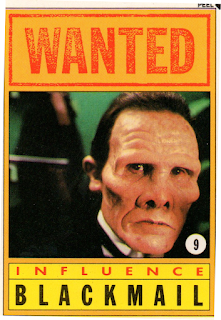 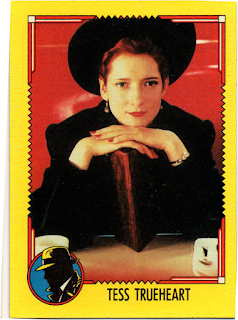 The return to horizontal brings us an action shot with hot steam coming out a boiler hose, or something along those lines. It's "A Hot Time for Tracy!" 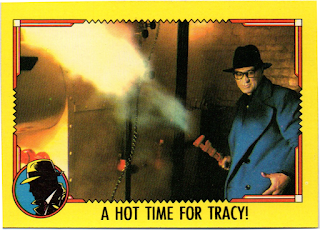 I never saw the movie that I recall, but busting this pack of wax brings images of old film noir detective movies brought to life in yellow and red. Here, "Tracy Tracks His Man:" 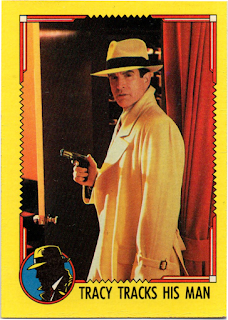 The final card in the pack shows "Big Boy" telling his dancers that they need to keep practicing despite him being arrested, according to the info on the back. It's "A Confident Crook:" 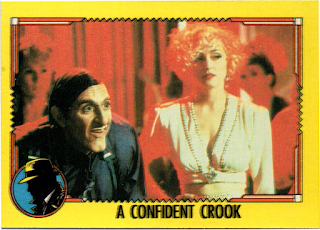 The card backs feature a yellow "lightning" bolt effect around the border. The top of the back has a blue background with the words "Calling Dick Tracy" and the card's number. There is a thin white line under that section followed by a red portion below. In the red, the card title and a brief description of what's happening on the front. That is followed by a "Continued on Card xx (usually the next card in the set) with that card's title. At the bottom of the card, we find copyright and date information. 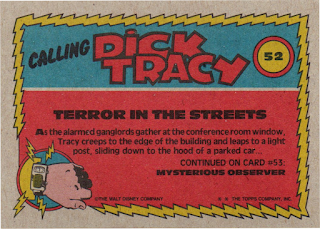 A link to the checklist is here: