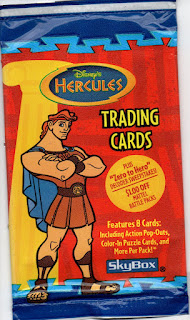 This is a pack of 1997 Skybox Hercules cards based on the Disney movie. Each pack features 8 cards, some of which might be "Pop Outs" or Coloring cards. The set contains 90 total cards. The subsets (Pop Outs, Characters, Coloring, etc) are not numbered separately as inserts, but instead are counted among the set's 90 total. The cards are standard 2" x 3" in size and vary in terms of layout and design, depending on the content of the card itself.

The first card in the pack is a "Pop Out." You can barely make out the die cut border surrounding the character. The idea is that the collector would punch out the character (or whatever was on the card) and then fold the bits to make a stand or to allow the character to hold various other punched out items. This one features Philoctetes: 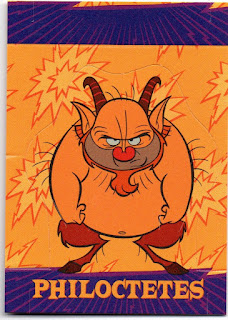 As it turns out, the next card is also a Pop Out. This time, it is "Phil's Equipment." After being punched out, the bits could be inserted into slits near Phil's hands or into other places. The cards have slots and tabs labeled and there are instructions telling the collector how to assemble things. 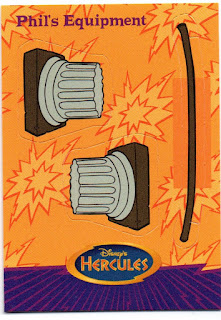 "Pain & Panic" is considered one of the Character Cards. These show a specific character (or characters) on the front with information about them on the back. Not only is the card borderless, the image actually extends beyond the card. I think that's a pretty unique layout for collectible cardboard. 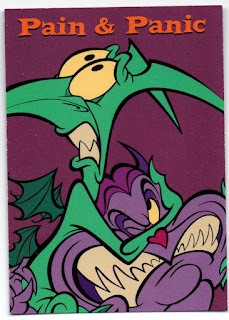 Next up, we have a card featuring a still from the movie (er, I assume. I have never seen it myself). This features "Mt. Olympus:" 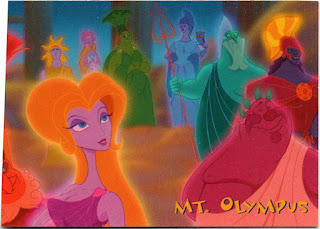 Like the card above, this one focuses on a location in the movie. This is "Underworld:" 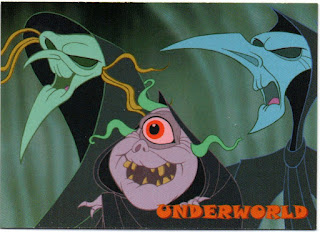 The next card comes from the lower numbers and shows a scene with the Hercules logo, but there is no other identifying text on the front. So, you have to flip it over to see what the card is about. I can't decide if that's clever or annoying. 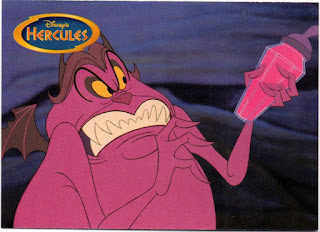 Another one of these movie cards shows up next. The cards seem to be packaged in a way that each subset is added in tandem along the production line. 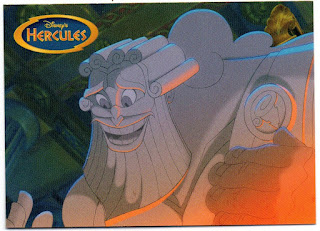 Hey! We pulled a puzzle coloring card! I have no idea if these are in every pack or not, but this would have been fun for a kid to not only find puzzle pieces, but to also be able to color the puzzle. Very nice! 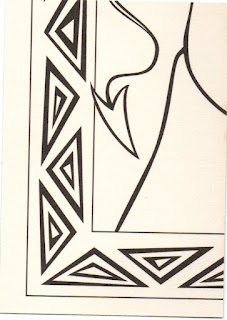 The backs of the cards are unique to the subset the card belongs to, but I wanted to show one of the backs so you can see what it looks like. In this instance, we have the back of a character card: "Pain & Panic:" 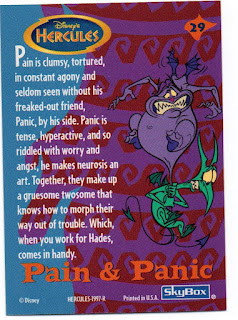 Edit: I forgot the "Sweepstakes" foldout:

Here is a checklist for the set: