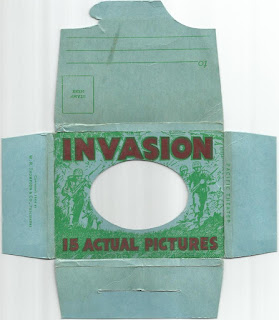 Here is a "pack" of 15 photo cards from the W. R. Thompson and Company Publishing house. This pack is from the "Pacific Theater Invasion" series. The "wrapper" is actually a custom cardboard box designed to be sent like a postcard. There is a place for a stamp and an address on the flap that goes in the back of the envelope/box. The front features "INVASION" and "15 ACTUAL PICTURES" in a red font with a green art scene of soldiers running. The middle oval is cut out so you can see the top card in the pack. The wrapper/box also has "PACIFIC THEATER" along one edge and copyright info on a side flap.

The cards themselves feature actual photos taken during various attacks in World War II:
(click on each for the full-sized scanned image) 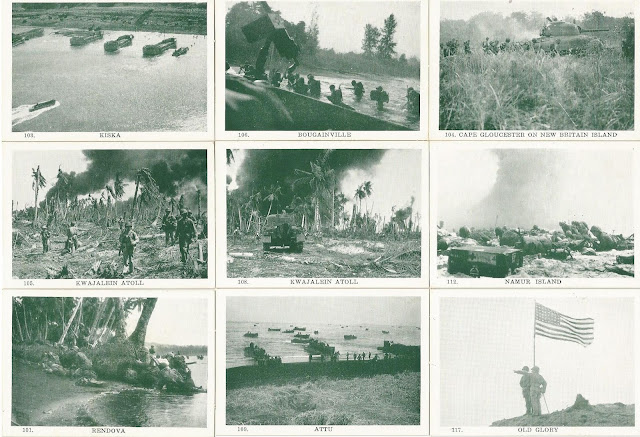 The fronts have a white border surrounding the black and white (er, actually these are more like shades of green) photo depicted. In the bottom portion of the border, the card number site on the left-hand side. The title of the photo (generally, the place where it was taken) is centered below the picture. (Note: Check out "Old Glory!" Hawai'i and Alaska were not states yet!) 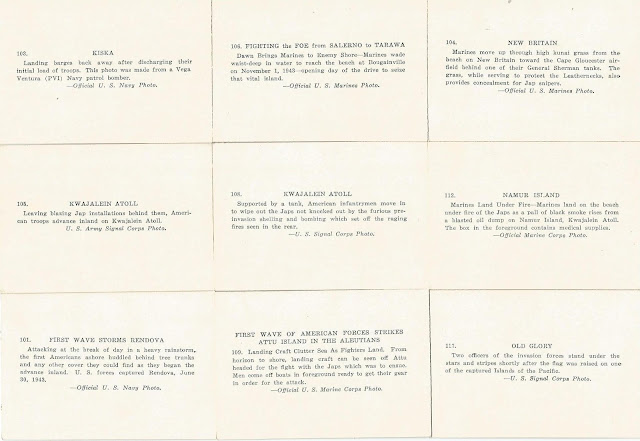 The backs of the cards repeat the card number and the title at the top, above a paragraph describing what was happening on the front. There is an italicized photo credit below the informational paragraph.

Whoa. I had no idea this sort of thing existed, but I'll be looking for them for myself now.

Oldest pack in the history of the site, by more than a decade! Impressive.

Thanks! I love finding old packs of stuff, especially if it’s something most of us have probably never heard about!

Fascinating! Makes me wonder who was the intended audience for these in 1944. Kids? Adults? I wonder what they were priced.

Admittedly, by 1944, it was evident that our side was in the process of winning on both fronts, but still far from a destined outcome.

I can't imagine cards coming out in 1991 as the war was going on (as short as it was). Nothing like inserting a "Highway of Death" chase subset in your Desert Storm packs.

I remember the 2001 Enduring Freedom set came close, as it contained some imagery of the reaction after 9/11 and the ramp-up to a much bigger two-front war. A truly bizarre card depicting Yasser Arafat donating blood (to help New York?) sticks in the memory.

Still, though, it's not like there was an equivalent 2004 or 2005 "Fallujah" edition of Enduring Freedom cards that depicted events as recently or contemporaneously transpired.

I just found the above packet (cards numbered 101- 115, 2 of the cards are different) while I was cleaning out an old trunk that belonged to my father. Someone in his family had mailed them to another family member. It is postmarked Oct. 19, 1944. It was sent by someone stationed at Fort Bragg, NC.
They are very interesting!