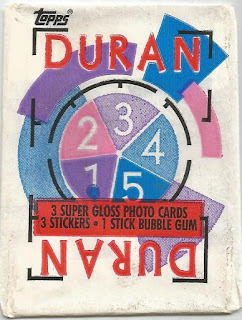 The name is Bon. Simon Le Bon. And this is a pack of 1985 Topps Duran Duran stickers and cards. The wrapper is oh, so 80's with its pastel colors and nod to Trivial Pursuit - or whatever was going on there. The set features 33 trading cards and 33 stickers.

The cards themselves have a gray border with the main image set in a trapezoidal inset. The DURAN DURAN moniker is split between two corners of each card, one of the DURANs being upside down. The DURAN words are set on a colored background. The images are stills taken from music videos, concerts, and publicity pics.

The stickers feature white borders with random gray specs on them. I actually though they were dirty or scuffed. They are die-cut in a similar fashion as the trapezoidal-bordered cards. They also feature images from concerts, videos, etc.

The backs of the stickers and cards feature information about the band or puzzle pieces to make your own Duran Duran mini poster. I would imagine many a teen-aged girl put those puzzles together. 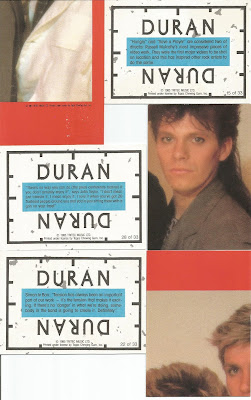 And for fun (and because I haven't done a custom wrapper in a while): 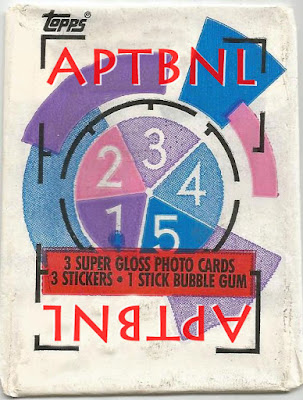 I loved Duran Duran when I was a kid. I'm actually surprised that I didn't own any of these cards.