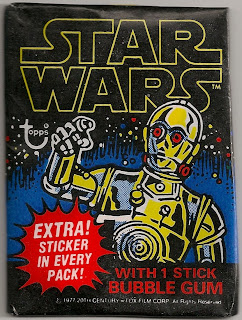 It's been forever and a day since my last post here. It's not for a lack of ambition, but mostly out of a lack of energy at the end of the (every?) day.  However, the desire...the desire to post runs deep.

This morning, I awoke to some news about the funny idea that today is "Star Wars Day", at least as far as the calendar is concerned. As in, "May the Fourth be with you."  Yeah, I know, kinda dumb, kinda funny.

So, I got the bright idea that for Star Wars Day, I would unearth a 1977 Series 1 Star Wars pack I acquired on eBay about four or five years ago.  I was so excited.  The back of the pack looked like this:


It seemed sealed believably nice, and I was ready to open all of the awesomeness. I crack it open, and I see a card back, with an appropriate gum stain underneath: 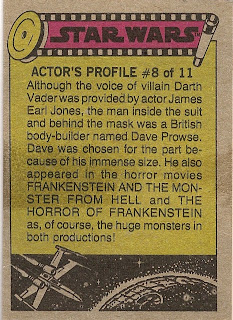 I eagerly take the cards out of the pack like a weak-minded death-stick junkie, and when I flip them around, I see:

Now that is a pretty rockin' vintage picture of two unamused, shoot-first kinda guys. What a minute! There's something wrong here...
For those familiar with vintage Star Wars cards, Series 1 packs have the C3PO wrapper as shown at the top of this post. However, series one cards are blue bordered, and numbered 1 through 66. This card (and all subsequent cards in this pack) are red bordered cards from series two.

Is is possible to feel duped maybe five years after the point you've been ripped off? I am proof that the answer is, "Sure, why not!" It could have been longer. I originally was thinking that I wouldn't ever open this pack, along with a second one I acquired at the same time.

Is it possible that I got some kind of super-rare series two cards put in a series one wrapper direct from the Topps factory from whence I was a tiny boy? Mmm...no. Add the fact that there are only four cards in this pack (real packs contain seven, plus the advertised sticker), and it really smells bad. Like a fish. Or like a rather masterfully resealed pack full of lies and droids.

So, here goes the rundown of the rest of my switcheroo, shortchanged, custom gum job:


Even the gum is a lie. I think I recall that pre-1981 Topps gum was fatter and maybe a little shorter. If that is correct, then this skinny little broken slab is clearly a plant. 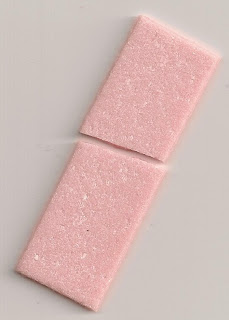 I wonder if I can data mine my eBay feedback history and find the vendor that sold me this sad little criminal case.  If only I could do this when I find him:
Still.  May the Fourth be with you.

Email ThisBlogThis!Share to TwitterShare to FacebookShare to Pinterest
Labels: 1977 Topps Star Wars Series not 1 but 2

Loved the red-bordered set. My favorite one.

I also remember being stunned that the card numbers were on the front. I had never seen that before.

Awesome! My brother must have gotten one pack of the yellow borders when he was a kid because I found them in the midst of my Star Wars craze as a kid. They might as well have been pure gold for how I treasured them. The Tusken Raider sticker was on my bed frame until I outgrew the bed.

Little did I know there were entire warehouses full of them... Thanks for the trip down memory lane!

Blast from the past ... bummer about the resealed pack. May the Force Be With You ... next time! Out of curiosity, did you end up opening the 2nd pack?