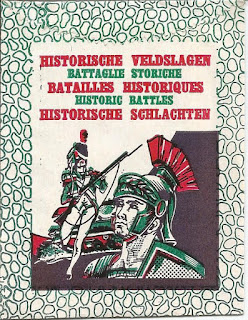 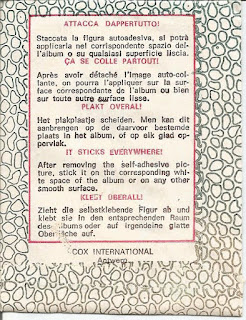 Here is a pack of 1968 Cox International Historic Battles Stickers. The wrapper is a lightly coated wax paper, measures about 2.75" x 3.5" and features the name of the product in a variety of languages down the front in alternating red and green text. The image on the wrapper shows various warriors done in red, white and green. The border around the wrapper looks like stones, maybe? The back has the same border as the front and contains instructions on how to stick the sticker (evidently, a new thing in '68.... Haha!)

The pack contains two stickers. The stickers have a thin white border, but feature a full color artist's rendering of a particular battle scene or event. Randomly stamped on the sticker is the number of the item in the set. I did some poking around and there are 306 stickers in the set.

The images are gorgeous: 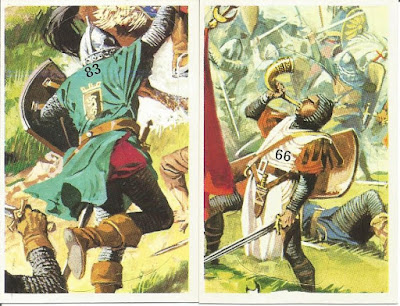 What you can't see in the scans is that the stickers have a die cut around the central image. These are not meant to be rectangular stickers. Instead, the cut out area to peel off is curved and rounded and kind of encircles the subject. These are pretty whimsical given the content.

The sticker backs feature the name of the featured battle with the year of the battle in parenthesis.  Below that, the sticker's number. The bottom provides a short descriptor of the image on front. These are also in several different languages. 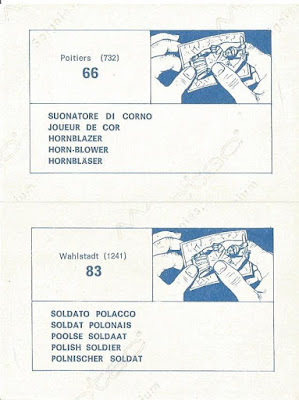 I think these are very cool items! I will probably peel and stick these somewhere just for effect - maybe to my PC case or something.