Written by Fuji at 10:38 PM
While basketball fans across the world are watching Game 2 of the NBA Finals, I figured I'd share my second 2016-17 BBM Fast Break pack break of the year.  This time it's a 2nd Half pack, which is essentially BBM's version of a second series.

If you're not familiar with this product you can click here (my 1st Half post) or here (SumoMenkoMan's review).

Let's start with a look at the pack itself, which features a few Japanese basketball players, some Japanese writing, and the name of the product: 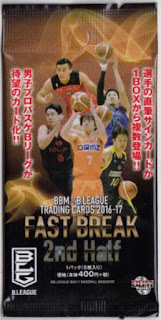 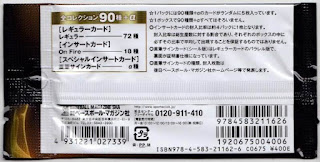 The back also has a bunch of write, but unfortunately... outside of the bar codes, I can't read any of it.

It looks like Ito crossed the Pacific and attended high school and college here.  He currently plays on the Alvark Tokyo, but based on his statistics, he doesn't seem like he's a big name.

There's not a lot of information on Taniguchi, but he's currently teammates with former NBAer Nick Fazekas on Kawasaki Brave Thunders.  Fazekas struggled to find a spot in the NBA, but looks to be one of the best scorers in Japan's B League.

Samurai is a starting two-guard (even though his card says SF) for Levanga Hokkaido where he's one of the team's assist leaders.

Fumiya Sato is a famous female Japanese manga artist.  Fumiya Satoh is a shooting guard who comes off the bench for the Sendai 89ers.

Yusuki plays alongside the most famous Japanese basketball player of all-time: Yuta Tabuse.  Both guys are starting guards for Tochigi Brex.

As I wrap up this post, the Golden State Warriors have wrapped up their second win against the Cleveland Cavaliers.  The sad thing is... I'm actually more interested in this Japanese Basketball League than the NBA Finals.  Unfortunately... there's not a lot of information on any of these guys outside of Asia-Basket website.

The Tochigi Brex won the B.League Championship 85-79 against the Toshiba Brave Thunders. Endo won the Best Defender of the Year title this year.

Nice! I was starting to wonder if I pulled any decent names.