Written by Jafronius at 6:29 PM
Greetings! 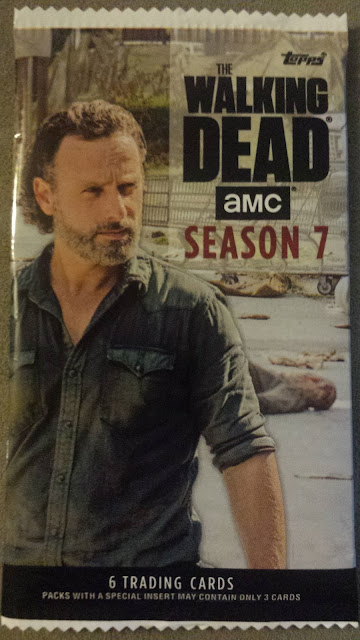 Target has had packs of this for a couple of months now.  I decided to pick up a pack for the site...hoping for a card with the tiger.  Here's what I got: 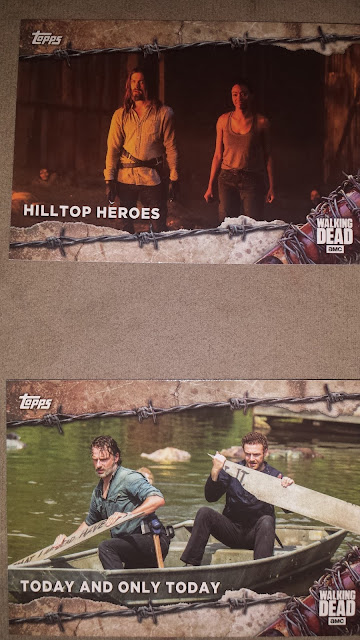 There's 100 cards in the set, with the various inserts, autographs, and parallels for all of them.

Season 7 starts with Rick Grimes and gang on their knees in front of Negan, who proceeds to (spoiler!) bash the heads in of two of Rick's buddies.  The rest of the season shows how they rebound from this and how they eventually get the courage to stand up and fight back.

The cards appear to go in chronological order, telling the complete story of Season 7.  And since there were only 16 episodes in the season, each episode is summarized over several cards. 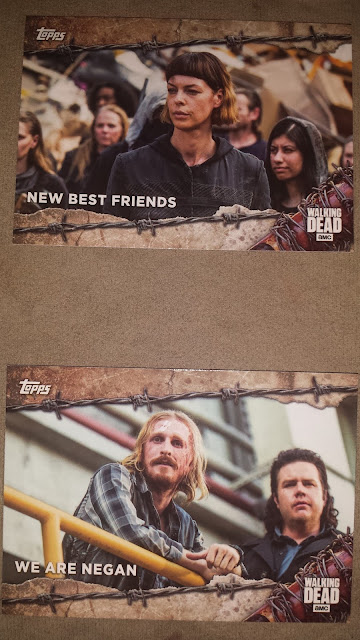 Some folks complained about the ultra violent premiere and blamed that and the multiple storylines for the lower viewership totals.  I didn't mind all that, but I couldn't reconcile the existence of the Scavengers, the junkyard gang featured in the New Best Friends card above.  They speak in some sort of broken simplistic English, and I have no idea why the spoken language would devolve like that a few years into the zombie apocalypse. 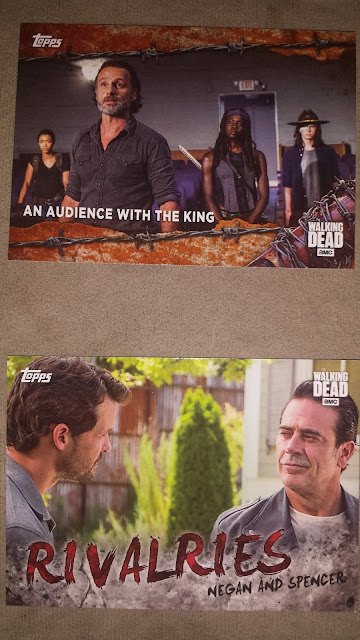 The Audience card should be the Rust-colored parallel, which comes 1 per pack.  The Rivalries card comes 1 in 4 packs.  Here are the backs: 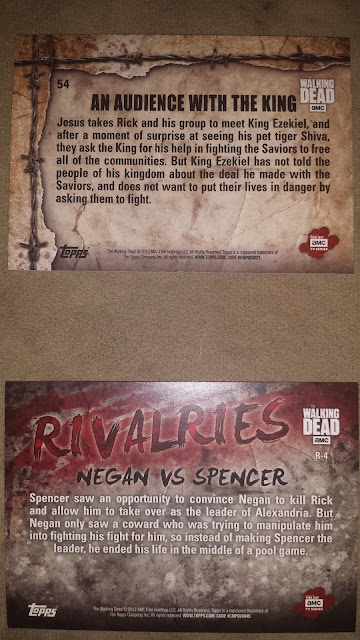 The write up is pretty decent for a show summary; the Topps Star Wars writers should take notice.

Anyway, that's the pack.  A little pricey for the number of cards in my opinion, and there's a point deduction for no pet tiger in the pack.  Enjoy the premiere and World Series, and thanks for reading!

Nice call on the Scavengers. My co-workers and I were talking about (the weird broken English) that last season.

I've seen these advertised but hadn't really seen the cards yet. I enjoy the series and was able to tune in last night for the season premiere. I may look in to getting some of these soon. Great post. Thanks.

A good friend of mine provided some of the sketch cards for this product. I've been tempted to buy a few packs, but I think I'm going to wait and just buy a hand collated set since I don't care about parallels/inserts.