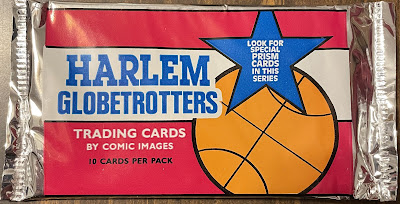 Today, we take a look at a pack of 1992 Comic Images Harlem Globetrotters. The wrapper show above is the iconic UD-style foil package. It features the red, white, and blue synonymous with the antic-filled basketball team, along with a large orange basketball.
The set contains 90 cards, one of which is a checklist.
The cards themselves are full color, borderless images, standard-size with stills taken from shows, guest appearances, and studio-style set pieces. First up, we have #48 "Sweetwater Clifton:" 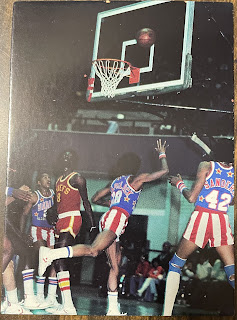 The next card, which once upon a time would have probably been one of the more popular, has not aged well in terms of social climate. #33 "Whoopi for the Trotters" features a supportive quote from Whoppi Goldberg on the back and Bill Cosby on the front: Some of the cards feature the players with cool ribbon lighting behind them. Who knew this would become one of the biggest trends in social media platforms 30 years later? Here we have #52 Clyde Austin: 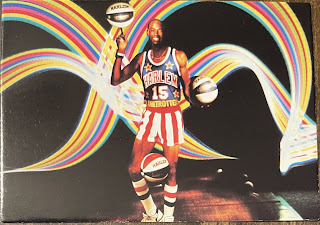 Nothing says late 80's/early 90's like huge headphones and a giant broadcast monitor on a trading card. Card Number 86 is "What a Crowd:" 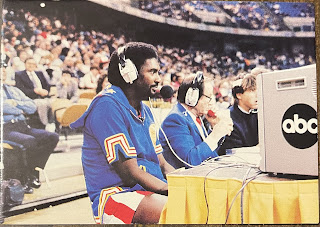 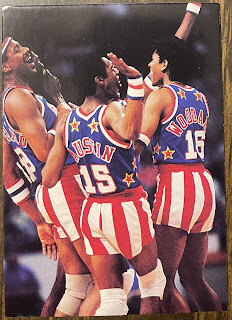 Of course, it wouldn't be Globetrotters without clowning around, so card #28 "Star Power" certainly brings that to the forefront, showing players in one of their many TV appearances: 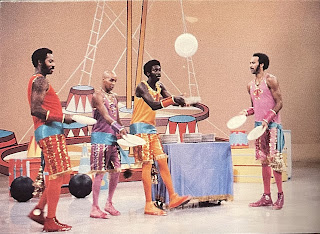 Here's another "light effect" card. This is card #55 with Sherwin Durham, aka "Shakes:" 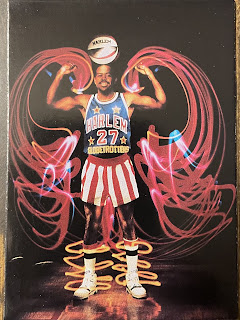 Card #77 shows Ovie Dotson with a big smile as he "hides" behind a ball (presumably spinning) on his finger: 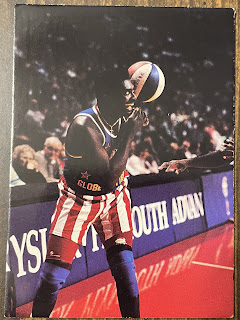 Card #22 shows the team posing on one of their portable platforms. "Have Court, Will Travel" explains that the team had to have courts created because they couldn't rely on the playing surface of the host venues: 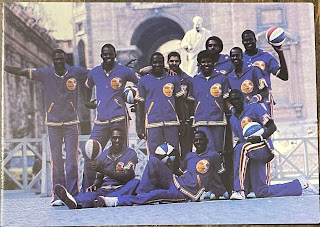 Rounding out the pack, card #51 shows Ernest Aughburns balancing on a ball with another ball in his hand: 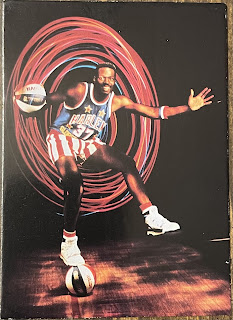 The back of each card features the "Comic Images Presents" header at the top in blue. In larger red letters, the words "Harlem Globetrotters take up a decent bit of real estate. Below that, "Trotters Trivia," the card number and title. The bulk of the back of the card features trivia that is usually related to the image on the front, but not always (for example, the Bill Cosby card above features a quote from Whoopi Goldberg). At the bottom of the back, we see copyright info. Along each side, blue stars create something of a "banner" feel. 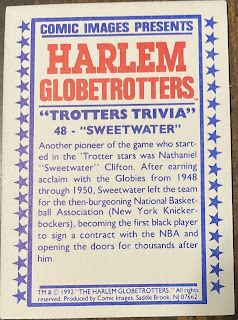 Very cool pack. I'd love to find some packs of this stuff at a flea market. One of the best things about this era of trading cards is they produced a set for just about every imaginable thing.