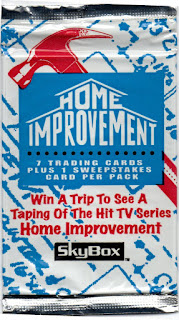 Here we have a pack of 1994 Skybox Home Improvement cards. Each pack has 7 cards plus a sweepstakes card for a chance to win a trip to a taping of the show. The cards measure standard 2" x 3" in size. There are 90 cards in the set plus two foil chase cards. The cards are divided into subsets, but numbering is sequential from 1-90. There was also a promo card sent to dealers. A link to the checklist appears at the end of this post.

Each card features a full-color borderless image on the front. Depending on which subset the card falls into, the appearance (or lack thereof) of certain characteristics varies. I will try to cover those as we bring in each card.

First up, we have Tim Taylor. This card just has his picture and the Home Improvement logo. This is from the "Tim's Guide to Life" subset and features a "tip" on the back along with, in this case, "How to Take a Nap:" 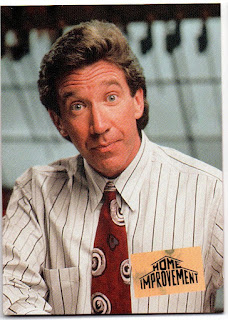 Up next, Tim and Al are on-set. Like the previous card, the only addition to the image is the show's logo. This card falls in the "Episodes" subset. Each card in this portion have an "A" version and a "B" version. This card is "Dances with Tools - B:" 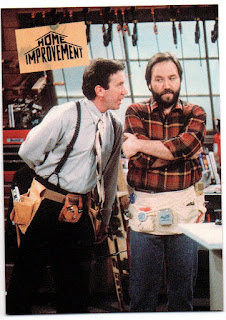 The next card shows the actual set. In addition to the logo, we have "Home with the Taylors" text added to the lower third of the card. This comes from the "Behind-the-Scenes" subset: 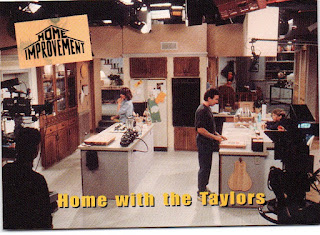 Now, we come to a "card" that is actually a static cling! As with other cards, this subset is numbered in line with the rest of the cards. We've got #83 "More Power" but there are a total of 10 possible clings in the set. Very cool! 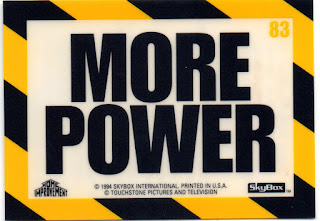 The sweepstakes entry card appears here, roughly halfway through the pack. The front (shown) provides places for entrant information, while the back gives all the rules and where to send the card. I wonder if the folks at the receiving end would see the humor in me sending it in or if they would be like Topps who had ZERO interest in my humor when I sent an expired entry card... I digress: 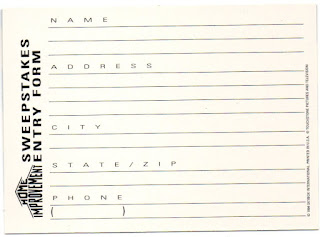 There are three checklists available in the set, and we pulled one of them, Checklist A. This one lists all the "Episode Cards," the "Sawhorse Blueprint" cards, and the "Behind-the-Scenes" cards. The checklists themselves are numbered as part of the set: 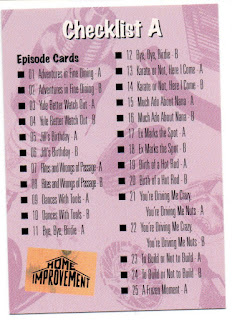 Another subset is called "Character Cards" and feature one person from the show on the front. Their name appears in text along the lower third. In our case, we pulled Heidi, The Tool Time Girl. The back of the card features a goofy write-up about the character, so we'll concentrate on the card front: 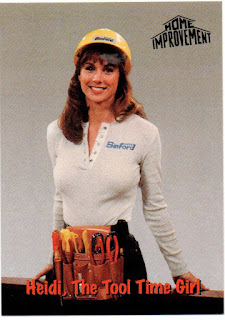 Finally, we have another "Episodes" card. This one is "Dollars and Sense - A:" 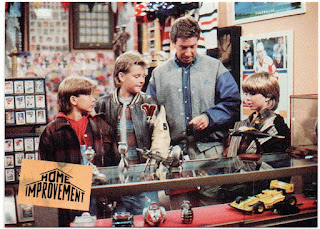 Here is the back of the "Dances with Tools - B" card. It features a "tip" on the left, the card number in the upper right (in a tape measure background, no less), a cropped version of the image on front, a snarky/witty commentary, and the Skybox logo and copyright info: Here is a link to the checklist:

Ah, one of my heroes.

Had no idea these cards existed. I loved this show back when it was on TV. Going to have to find it on a streaming service (and maybe some sealed packs). Thanks for posting!

Looks like you pulled the ultimate chase card... with that Heidi pull. Congratulations!