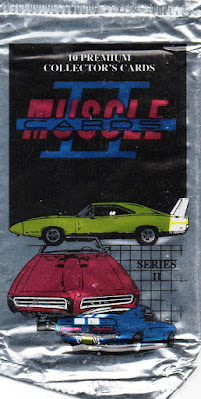 This post features a pack of cards from the 1992 PYQCC Muscle Cards II set. This is a continuation of a set of cards called "Muscle Cards I." The wrapper is foil and the cards measure the standard 2" x 3" in size. Each pack contains 10 "Premium Collector Cards." Cards in this set are numbered 103-192 plus there are inserts and promo cards as well. A link to an online checklist is at the end of this post.

Each card features a 60's-70's American muscle car on the front. The cards have black borders with pink and yellow accents surrounding the image. In addition, a pink banner with white text appears at the bottom of the card with the car named in the white text. The "Muscle Cards II" insignia rests in the upper right corner of the card. 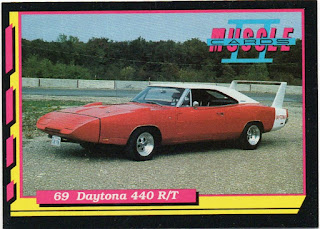 Next up, a 1969 Plymouth GTX convertible: 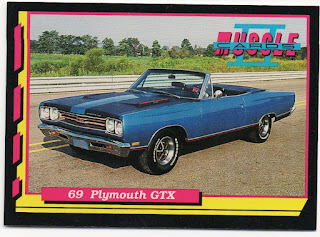 The third car is a 1965 Pontiac GTO that weirdly looks like a picture of a diecast model: 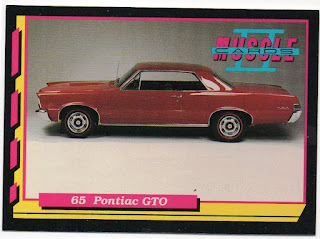 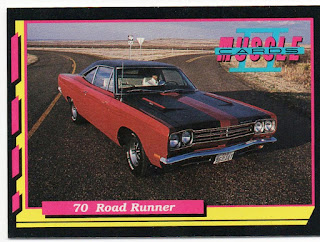 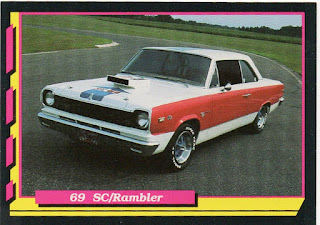 One of my personal favorites, the 1970 Hemicuda: 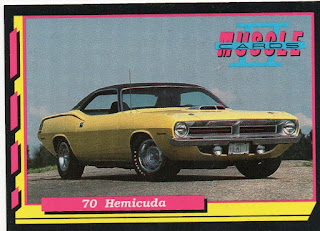 In addition to classic muscle cars, the set includes "Modern Day Muscle" which aren't really a subset, as the card numbers fall in line with the other cards. One example is the 1988 Tans Am GTA: 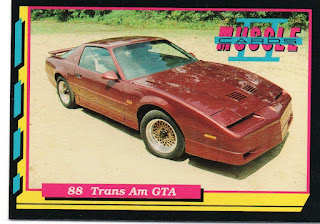 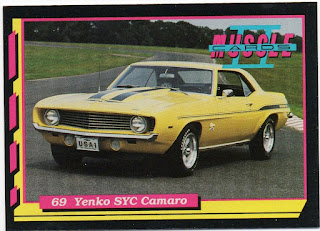 And, of course, if we're talkin' muscle, ya gotta throw a Mustang in the mix. This is a 1970 Mustang Pace Car (with mini-me next to it): 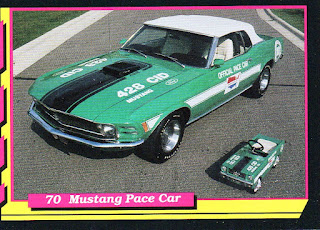 One of the insert series is the "King of the Hill" set. These are numbered differently from the regular set. This one is actually from the Muscle Cards I series but found its way into this pack. It's number 6/8 from that series, a 1966 Shelby Cobra 427 S/C. You can't tell in the scan, but the "KING OF THE HILL" lettering is in gold foil and there is a gold foil border that runs inside the pink one: 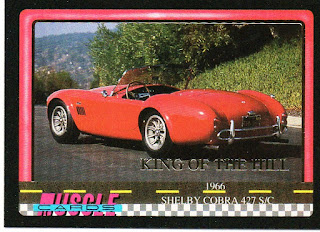 As for the card backs, they feature a full color image of either the engine or another angle of the car featured. The car's year appears in a checkered flag along with commentary text. The bottom of the card features a gradient fill from orange-yellow to red with the card's number and the designated HP for the engine in the vehicle: 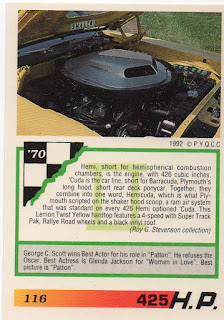 A checklist for the set can be found here:

Sweet Shelby Cobra! One of my favorite cars of all-time. Weird how it was inserted into the wrong series. Maybe they had some leftovers and figured they pass them along.

I love this set and opened many packs of it when it was new, but I never pulled a single insert.