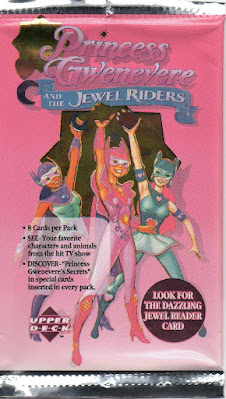 Here is a pack of cards based on a children's television series. This is the 1996 Upper Deck Princess Gwenevere and the Jewel Riders. There are 8 cards per pack. The set contains 73 cards, divided into sequentially-numbered subsets and an "insert" set. Cards 1-30 feature scenes or items from the TV show. Cards 31-45 are actually "Stick-Ums" stickers. Cards 46-55 are a subset called "Discover Avalon." The first "subset" contains cards numbered PS1-PS15 and feature a hidden message (more on that later). The final few cards are the "Jewel Reader Cards," numbered JR1-JR3 which decode the aforementioned hidden message cards. The cards are standard 2" x 3" size.

Most of the cards in the set (and in the pack) are the 1-30 series, showing a scene from the show. The cards feature a borderless image that is given an overlay "border-esque" feature in a semi-transparent white frame featuring pink and white hearts and flower/gem kinda thing. The Upper Deck logo in pink rests in the lower left corner and the show's logo rests in the lower right. In the center of the bottom of the card, we have the card's title in a pink script. On some cards, this is all very hard to read.

The first card out of the pack is "The Heart of Avalon," which is number 29: 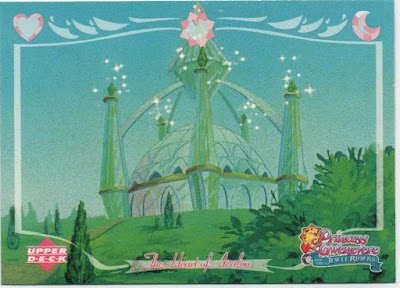 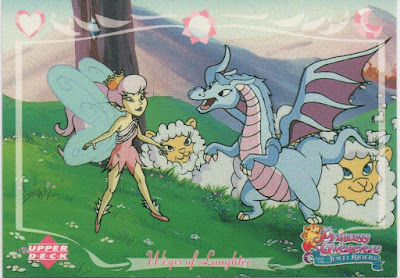 "Badland Bandits" on card 21 brings some action to the table: 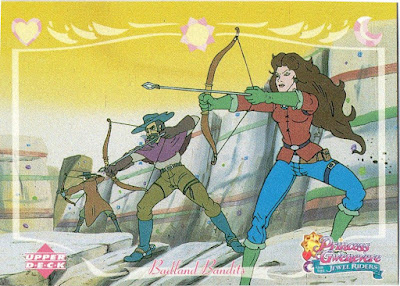 The next "card" in the pack is actually one of the Stick-Ums stickers. It's numbered as 44 and features "Merlin's Jewel Box." The stickers were not numbered as a separate insert, but just continued the numbering from the traditional cards: 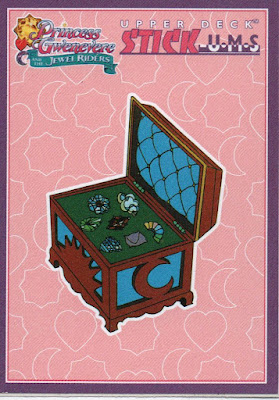 I have no idea what this show was, as I had never heard of it before coming across this pack. The next card "Riddled with Magic" (Number 22) certainly makes one wonder... 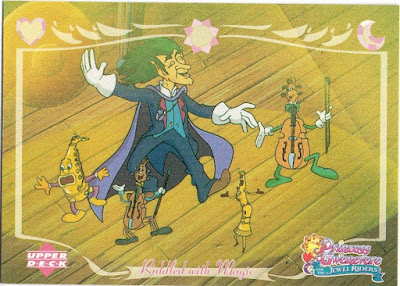 The next two cards actually work together. The first one is JR3 and represents one of the three "decoder" cards. It features a character from the show with a large red cellophane heart in the middle of the card. The idea is to place the red heart over the "Secrets" card (below) to reveal a hidden message: 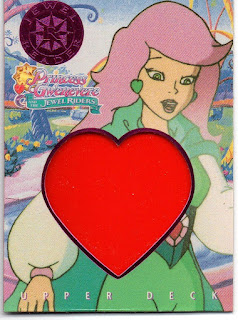 The "Secrets" card in this pack is numbered PS15. This card works with the decoder above to reveal a "Secret of Avalon" that gives the reader/viewer some behind-the-scenes insight into the aspects of the show: 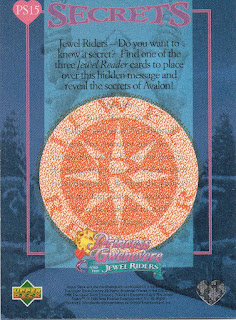 Below, we see the decoder card on top of the hidden message card to display the secret: The final card in the pack is Number 47, which is one of the "Discover Avalon" subset cards. Like the stickers, these are not numbered separately from the main checklist. I wonder if the series of these create a whole map, as it appears this is a portion of a larger puzzle: 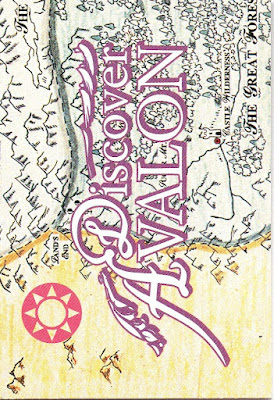 The card backs feature information about the image portrayed on the front. In addition, we have copyright information, the card number, and a foil heart-shaped UD logo: 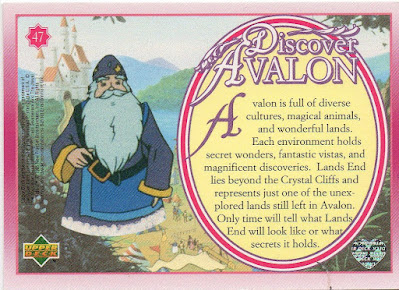 I was able to find a checklist detailing the various cards, stickers, etc:

It's sad when a 1996 UD Princess card product (from a show I've never even heard of) features more interesting insert sets than 80% of the insert sets Topps produces these days for their baseball fans.

Never heard of this property before which is weird because even though I was not the target market, you'd think I would have seen commercials and likely toy tie ins in Tomarts and other publications. Art looks good.