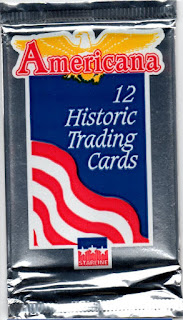 Here we have a pack of 1992 Starline Americana cards. The wrapper is thick foil (think UD wrappers of the same time period) and features the set name in red with a yellow ("gold) eagle at the top. The center of the wrapper features a red, white, and blue motif arranged to resemble a waving American flag. Each pack contains 12 cards. The cards are standard 2" x 3" in size.

The set contains 250 cards including 3 checklists. There was also a binder one could order to hold all the cards. In addition, a set of 7 promo cards that have the word "PROTOTYPE" stamped diagonally across the back was also produced. The promo cards were numbered the same as their regular set counterpart (ex: George Washington is #10 even though he is often referred to at the #1 promo card).

Each card features the same "Americana" name and eagle as the wrapper at the top. There is a blue background with stars which serves as the border along the sides as well. In the center, the main subject of the card is portrayed either vertically or horizontally. Beneath the image, a black rounded rectangle features the subject's name in white text. The lower right corner features the Starline logo.

The first card in the pack is Franklin Delano Roosevelt: 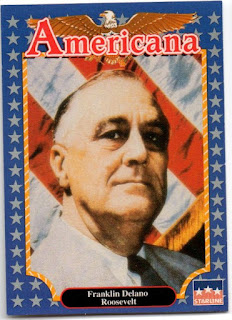 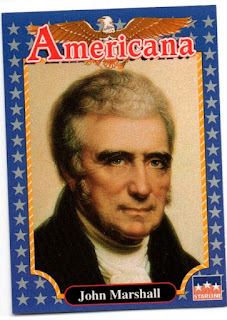 He is followed by Stephen Douglas: 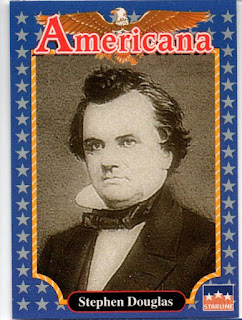 George Washington Carver appears on the next card in the pack: 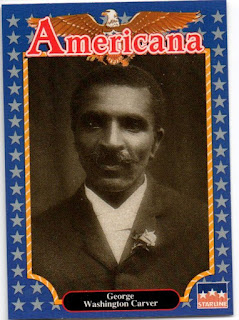 Next is George McClellan: 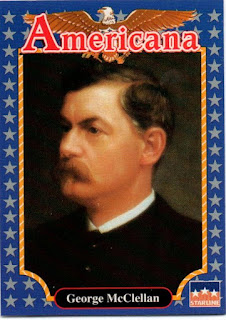 Here, we have a horizontally-oriented card, "William Penn Founds A Colony:" 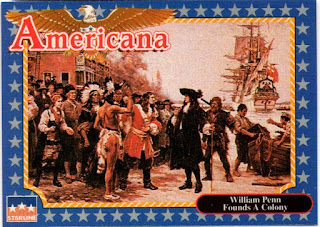 Next up, Henry Kissinger: 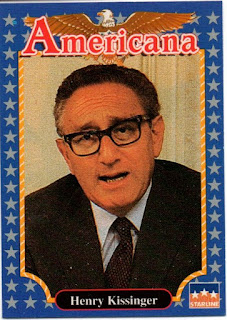 another horizontal card follows. This is "Discovering America:" 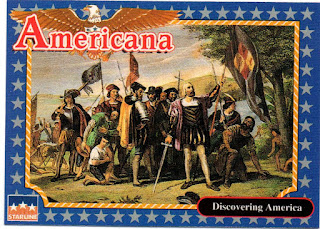 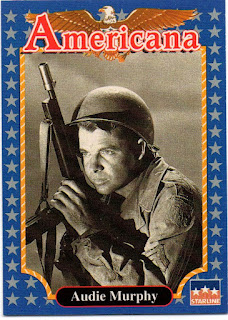 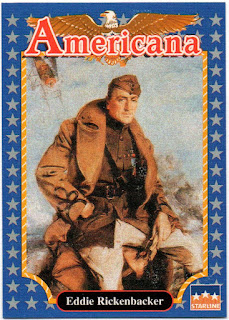 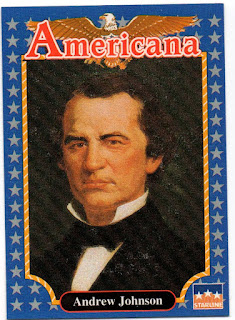 Finishing out the pack, we have George Mason: 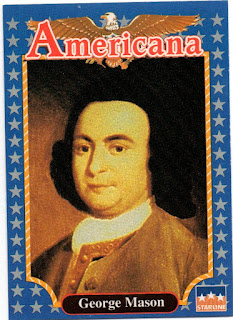 The backs of the cards feature another version of the image on the front (or a different photo) and the subject's main info (name, position, etc) in a red box that takes up approximately 1/3 of the back. Below that, a section called "Historical Highlights" lists information, dates, etc related to the depicted subject in an orange box that takes up a large portion of the back. Inside the orange box is a blue "Trivia Quiz" box containing a quiz question with a guide as to which card number has the answer. Outside of the orange box at the bottom of the card, a red box contains the answer for a trivia question from another card. Along the bottom, there is the "Americana" insignia with the card's number and the "Starline" logo 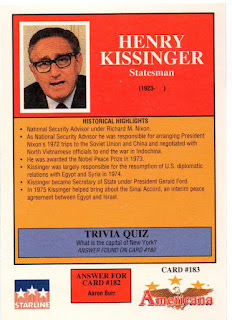 A checklist can be found here:
https://www.nslists.com/americ.htm

I'm building this set and down to needing only three cards:

If you have any of these up for trade, please let me know. I have plenty of duplicates available.

I was just trying to figure out if anyone from the checklist is still alive. The answer is yes, at least two... Buzz Aldrin and Dan Quayle... I wonder if I'm missing any.

If I had come across these back then I would have been picking them up for sure!