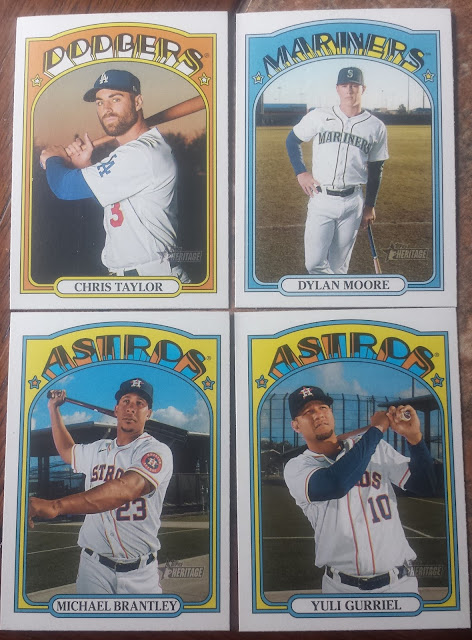 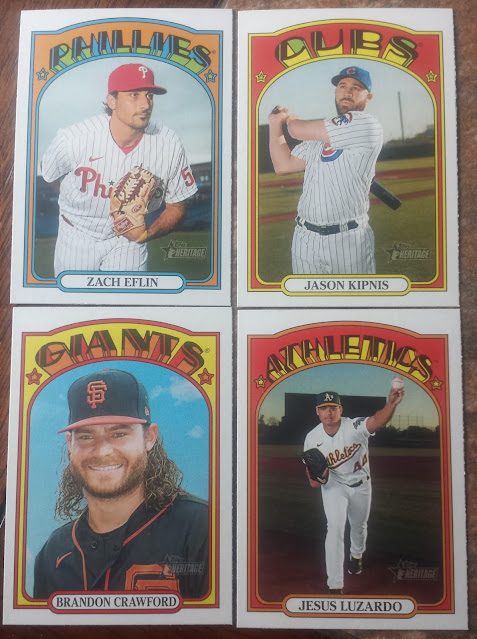 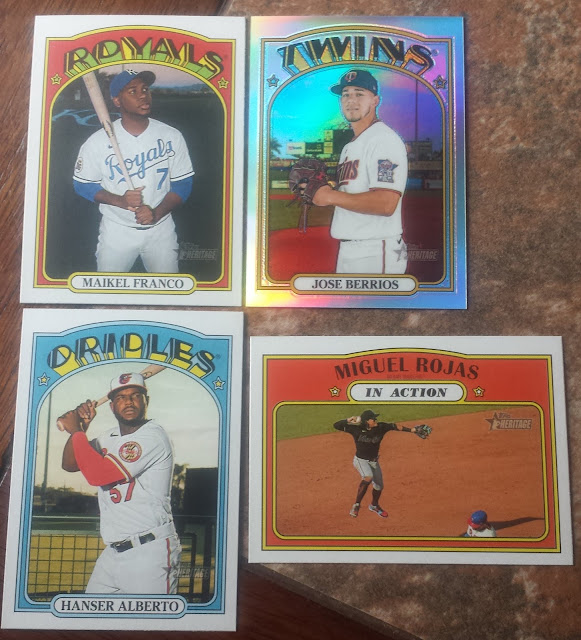 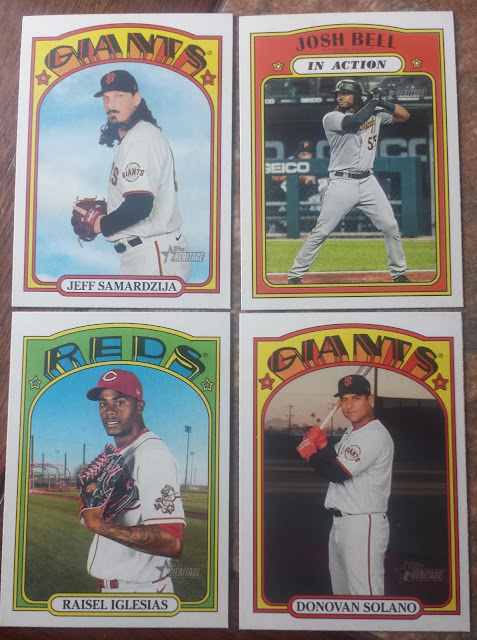 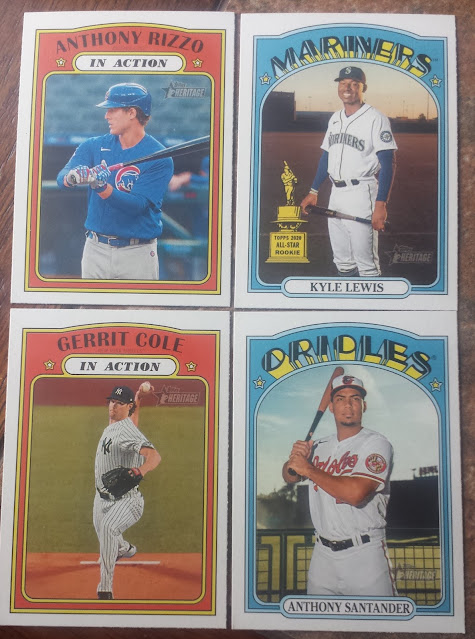 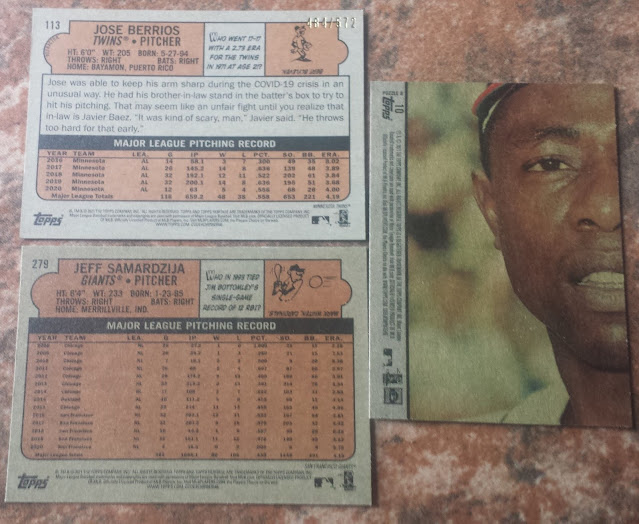 Anyway, that's the pack.  I haven't read too many complaints about the set, other than the short prints.  I apologize for all of those non-pack associated words.  Enjoy the long weekend, and thanks for reading!
2 comments 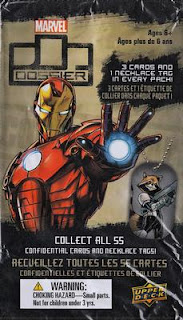 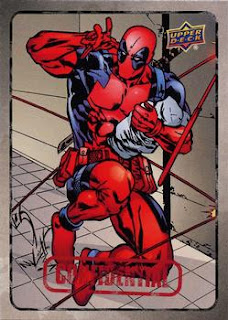 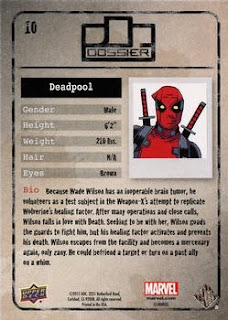 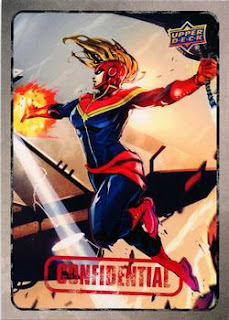 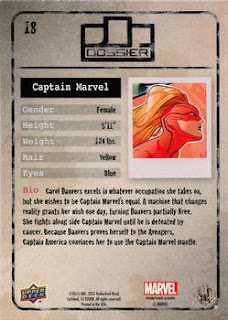 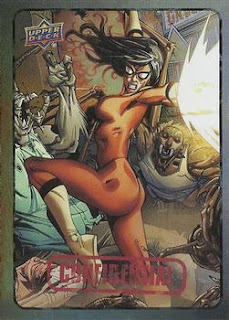 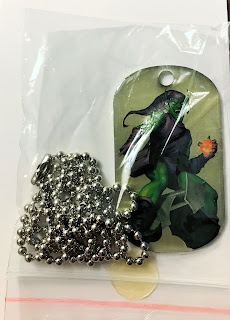 Unlike some other Marvel card/dog tag packs I've opened, these dog tags come in a small zip lock bag, glued to a thick white cardboard card. I like this because it helps keep the trading cards in the pack free of damage. This pack yielded a dog tag of Spider-Man's nemesis, none other than the Green Goblin. According to the checklist over on TCDB, this particular dog tag is labeled as a short print (SP). This was news to me as the packaging doesn't mention any of the tags being SPs, but I'll take it. I'm not sure what I'm going to do with the bevy of dog tags I now have, but I'll figure something out. Perhaps I'll put them in a penny sleeve and a top loader? Your thoughts?
3 comments

Written by cynicalbuddha at 11:39 PM

Wow it's really hard to find card products, well at least retail.  I decided, against my better judgement, to pick up a hobby pack of Diamond Kings on a recent stop in to Don's Sportcards here in Anchorage, Alaska.  I had stopped in to pick up a few supplies.  I hesitated on buying just this one pack, because hobby prices are INSANE!!! This pack was over $10 bucks, so let's savor it since it's been awhile since we've had a pack on here. 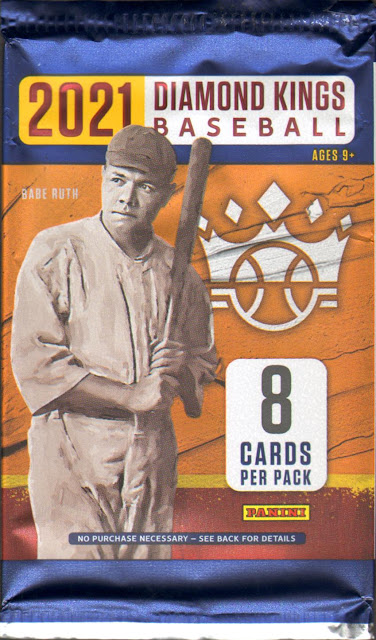 Two hits per box, 12 packs per box, and 8 cards per pack.  We have a 1:6 chance of getting one of the hit's.
Diamond Kings does have a great selection of old timey players, HOFers, retired and current players.  Let's have a look at the base design. 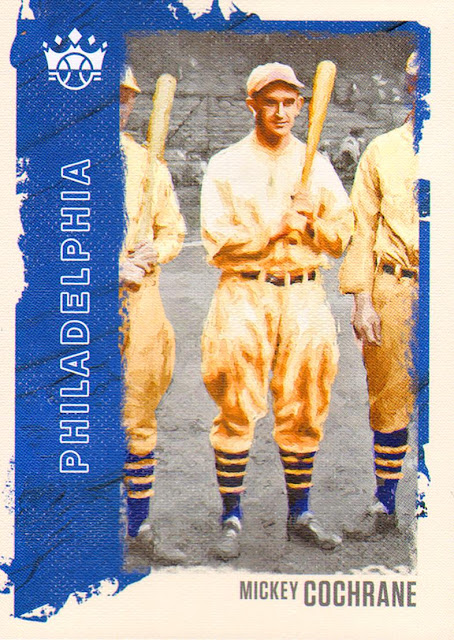 Panini has made Diamond Kings into an artsy fartsy offering with inserts to match.  Seems like a lot of real estate is taken up by the border.  Here's the back 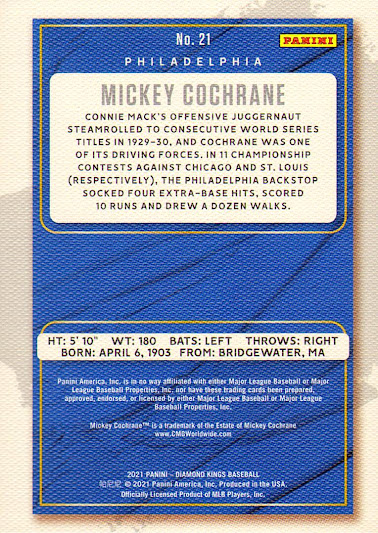 The backs have a small blurb, but no stats, which is kind of disappointing. 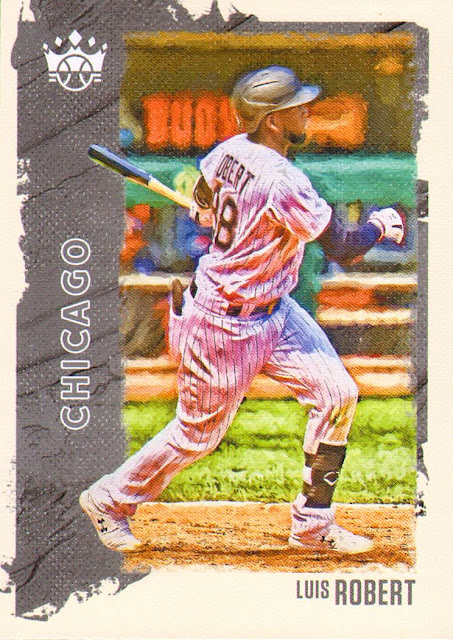 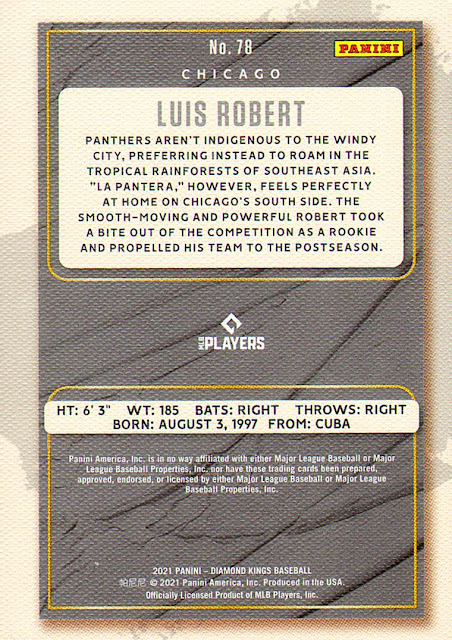 Here are the rest of the base cards: 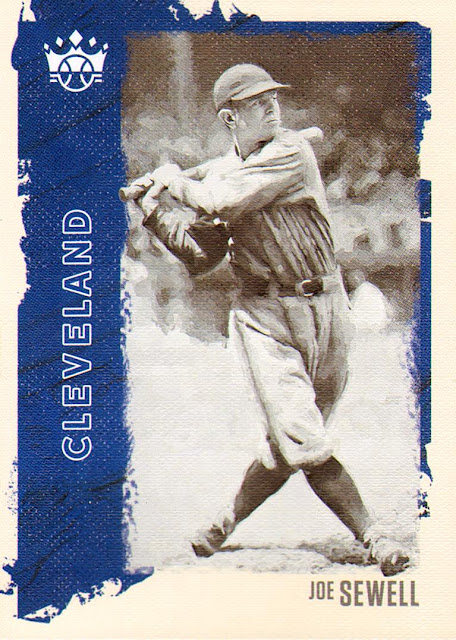 This pack had a couple rookies in it. 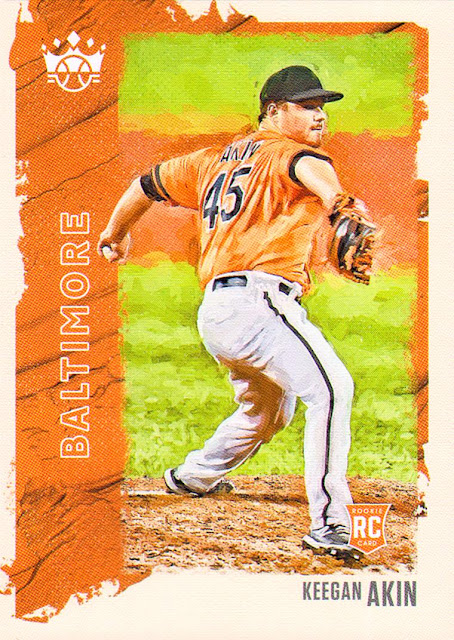 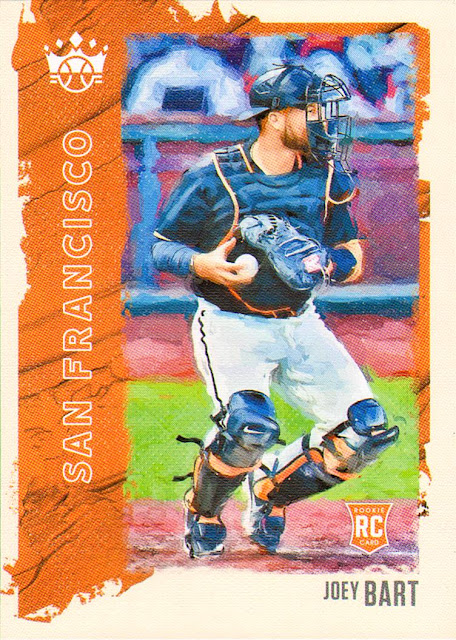 Cards numbered over 100 are short printed, or at least that's what they say.  I pulled not one, but two SPs in this pack. 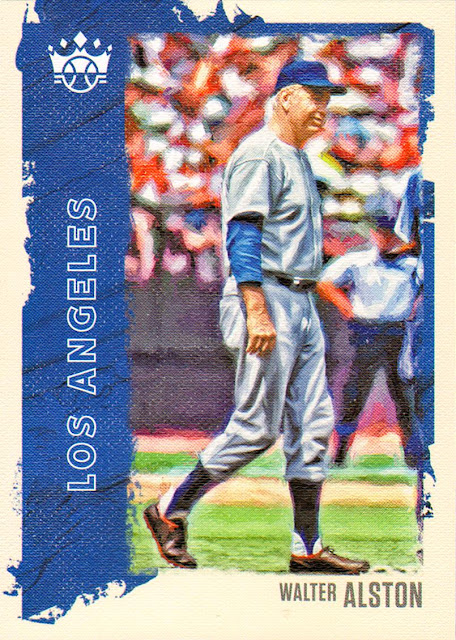 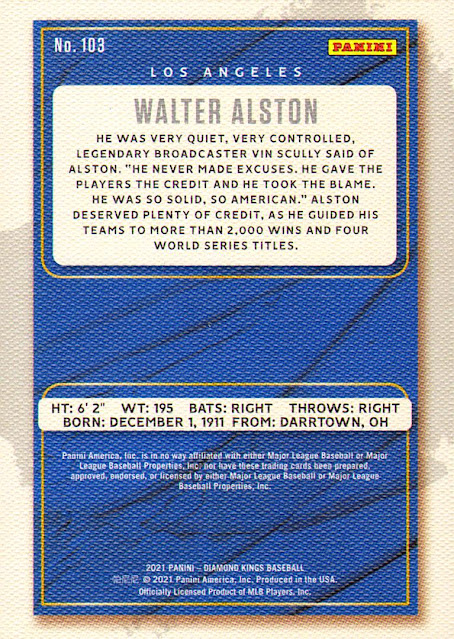 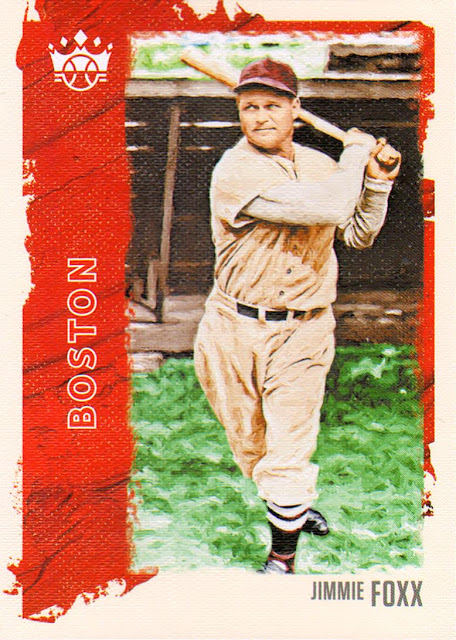 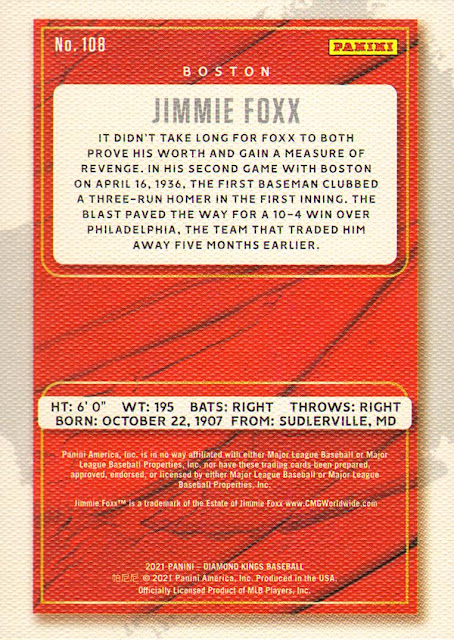 Sadly I didn't get one of the hits, but did pull this Aficionado of the 2020 AL MVP 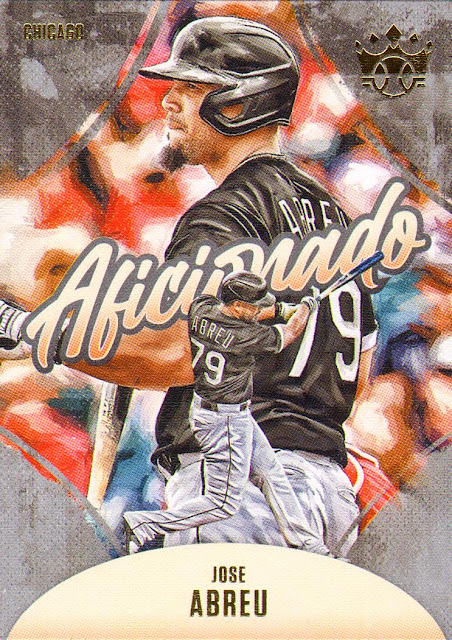 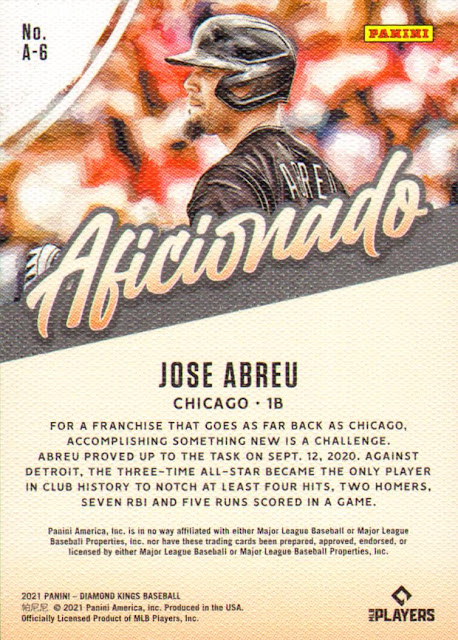 Not a great pack, but it's been months since I've opened anything and it was fun.  In year's past Diamond Kings has been a fun rip, but sadly the current state of the hobby really has over valued this product.
4 comments