Written by flywheels at 9:57 PM

#358 Robert Meachem
Like Upper Deck did with their 2011 football set Topps rehashed it's baseball design for use here.  Overall it works pretty well.  I like that the team's division is added to the circle around the team's logo.

3rd pick (73rd overall) by the Patriots out of Louisiana State

#14 Reggie Wayne - 1950 Bowman
These mini cards are about the same size as the ones found in Magic football are are seeded 1:3 packs.

Sixth pick (180th overall) by the Ravens out of Virgina Tech
If you liked this year's baseball design then I think you'll like Topps' return effort to football.  The inserts appear to be plentiful with several nice designs from what I've seen in person and from the sell sheets.  I'll be buying some more looking for Carolina Panthers and of course the RC of #1 overall pick Cam Newton.
3 comments

Written by Matt Flaten at 6:14 PM
Football is back and so let's open some cheapo football packs from products from a few years ago... 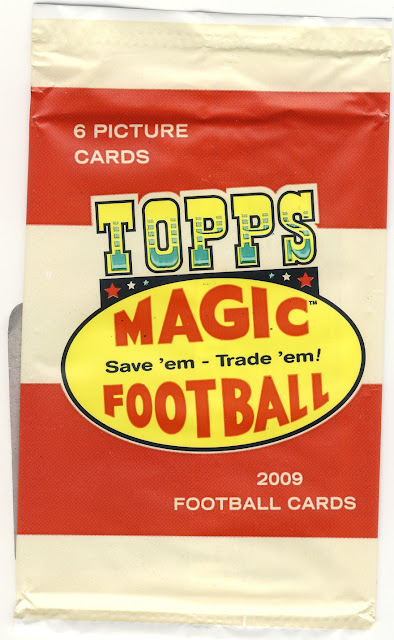 Javon Ringer has the unfortunate duty of running behind Chris Johnson and so his immediate future seems to be getting about 300 yards rushing a season.

Here's a little Jayhawk mini action for you.  Aqib Talib was having a great 2010 season for the Buccaneers [6 interceptions, 1 TD through Week 13] until getting injured  against the Falcons.

Steve Hutchinson is the highest paid guard in the league for the Vikings...the Vikings look like they are going to sign Donovan McNabb and it makes me so happy they've gone with Favre-light.

In my fantasy football league this year I have made a personal blood oath to myself to not draft Michael Crabtree under any circumstances no matter how enticing it is...no matter how high the drafting ranking has him listed...you will get burned.

Last but not least a little Percy Harvin for you.  The question is, who in Minnesota has worse migraines, Percy or Michelle Bachmann?

Written by Community Gum at 6:09 PM
Next stop on this whirlwind tour of cards that are months upon months old (aka ancient) are the always popular black background Wal-Mart parallels. You can't tell from looking at it, but they're in there. Let me prove it to you. 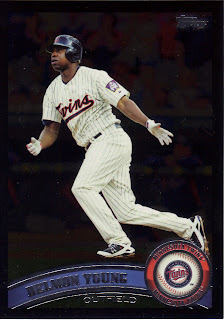 #485 - Delmon Young - The wonders of no background. See how players can hit fly balls without the need for a petty bat. 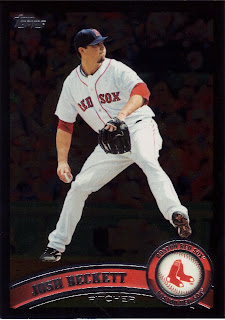 #610 - Josh Beckett - Is this guy still good? I can't tell what people think anymore. I think the answer is no. 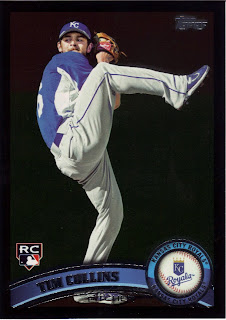 #471 - Tim Collins - Here's a rookie that I've never heard of that will probably be nobody. Of course now that I've said that, he'll be an all-star next year and a hall of famer. 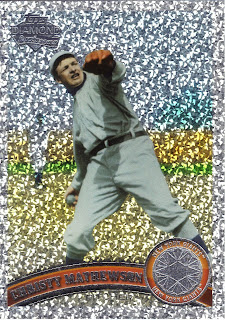 #102 - Christy Mathewson - Diamond Anniversary - Probably the best card, luckwise, from my blaster adventures. This is up for trade (along with all the black borders you see here) if you're interested in one of those SP sparkly dealies. Oh yeah, this is retro-fitted with a series 1 card number. Just wait until update with the new parallels for EVERYTHING. Totally necessary! 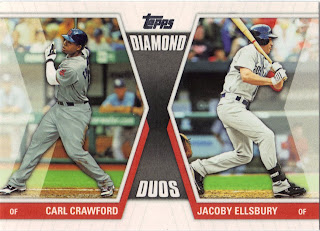 #DD-11 - Carl Crawford/Jacoby Ellsbury - Diamond Duos - I dislike these cards, but most people do. I believe Carl is airbrushed up the waz. Technical term. 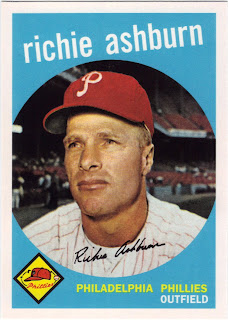 #60YOT-67 - Richie Ashburn - 60 Years of Topps - I suppose these are more tolerable, but not by much, honestly. I've never been a big fan of reprints. I'd rather see creativity. 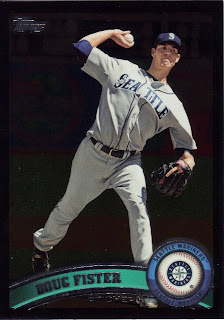 #362 - Doug Fister - Doug? I barely knew 'er. (Think about it. You'll get the joke eventually. Then you'll wonder why I wasted your time.) #520 - Jorge Posada - I'm sure most Yankee haters are thinking the same thing. "I hope he's trying to catch the ball with his mouth." Actually, after some of his comments earlier in the year, some Yankee fans may be thinking that too.

Ta da! The magic of dropped backgrounds. No super awesome action shots to show how well these cards can pop, but you know already, don't you? Yeah, I thought so.
3 comments

Written by Community Gum at 11:15 PM
I went through virtually all the iterations of 2011 Series 1 retail packs you could find back when those were released. Series 2 came out a few months ago, but surprisingly no one has posted anything on this site. Maybe you've all been waiting for me to run the gamut of series 2 since I did such a smashing job the first time around. That must be it. Well, wait no longer my friends. 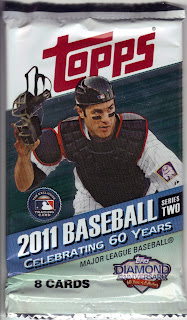 You'll see plenty of Joe Mauer's mug on the packaging of a retail blaster. That includes this reduced card pack. No special parallels in this go 'round. We'll save that for later. 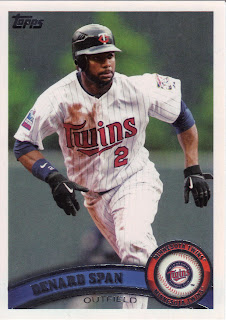 #408 - Denard Span - I don't follow the AL closely but I think I heard this guy was having a pretty decent year. Maybe he'll make first series in 2012. And hopefully with a more exciting picture. 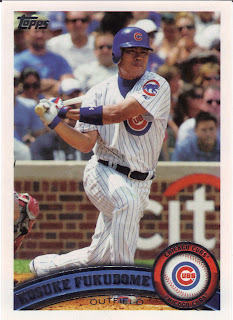 #582 - Kosuke Fukudome - I know that this guy is having a decent year. The problem is that he's still not worth the money we threw at him. At least he stopped the helicopter strikeout crap, so maybe another team will want him before the deadline. 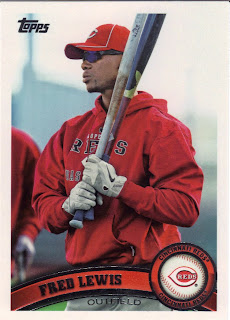 #517 - Fred Lewis - Sorry Fred, don't know you, but I try to block out all things Reds. Please don't chase me with your two bats. 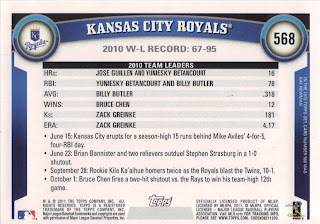 #568 - Kansas City Royals - Here's the back of one of the team cards. I figure you don't see too many of these on blogs, so why not. Could be better, but could be worse. 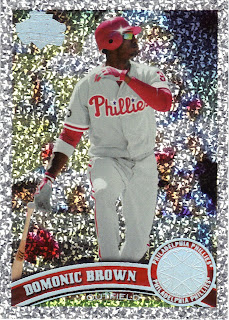 #421 - Domonic Brown - Diamond Anniversary - Now we get into insert-ville. And our first stop is on a Sparkly version of the fake sparkle SP! Uber-spark! That's like 3,000X the value of a single sparkle, right? 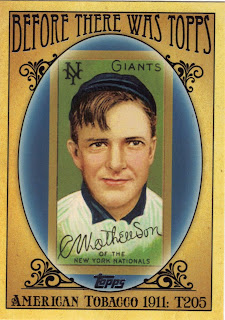 #BTT2 - Christy Mathewson - Before There Was Topps - 1/4th of the pack is inserts. Not a fan of that. As inserts go, these are kinda rare, but it's still another Mathewson card, which is not rare in Topps products. 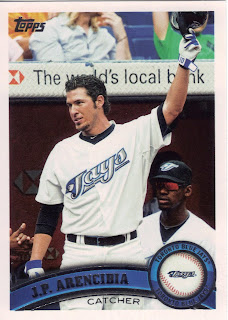 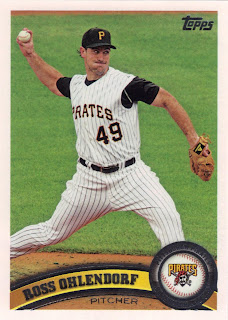 #616 - Ross Ohlendorf - Look out, he's going to blow! How about them Pirates, eh? If the Cubs can't come back (and of course they can't), then I hope the Pirates when the whole thing. 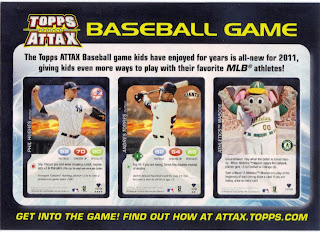 Topps Attax Promo - Anybody interested in a video showing how this game is played? I can make that happen.

Alright, a very underwhelming pack to start us off, but isn't that almost always the way on a second series? Things will get better throughout this journey, I hope.
2 comments 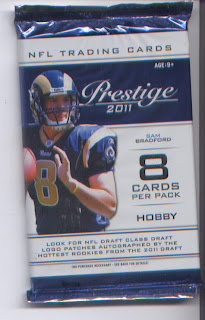 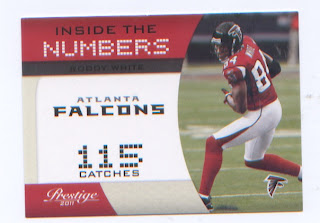 Inside The Numbered- Roddy White #10 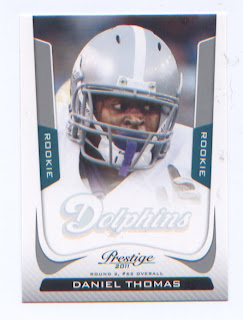 #42- Chad Johnson (When did he switch his name back?), #19- Todd Heap, #61- Knowshon Moreno
I don't really like the look of these to much. Kinda plain. I heard something about Panini not Serial Numbering any inserts this year? Is this true?
0 comments

I finally found some "new" packs in the discount box @ my local Target.

#178 Albert Pujols
Is Pujols the next big free agent or will he decide to re-sign w/ the Cards?

#135 Hideki Matsui
I really don't care for the Yankees, but the combined sky line and setting sun make for a nice backdrop...even on a baseball card.
1 comments